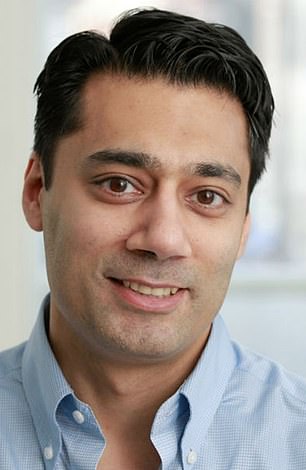 Celebrity eye surgeon Bobby Qureshi has been struck off the medical register following a three-year investigation by The Mail on Sunday.

Qureshi, who boasted of being a world-famous ophthalmologist, found his reputation in tatters last week after a tribunal ruled he abused his position and put elderly patients at risk for his financial gain.

The disgraced surgeon, 49, offered innovative procedures to prevent blindness at his private London Eye Hospital, and persuaded thousands of patients, whose eyesight was slowly fading, to part with up to £25,000 for treatment.

Some remortgaged their homes or spent their life savings on pioneering lenses Qureshi helped to develop, which are designed to delay the progression of incurable age-related macular degeneration (AMD).

Patients were lured into his prestigious Harley Street clinic by glowing testimonials from celebrities he successfully treated, such as EastEnders actress June Brown and Lady Annabel Goldsmith, while Qureshi cultivated his media profile.

Yet dozens of those operated on at Qureshi’s clinic were left distraught and out of pocket when their eyesight failed to improve after surgery – or got worse.

Many patients described feeling like ‘guinea pigs’ because Qureshi failed to adequately warn them of the ‘uncertain’ risks posed by the novel technology. The tribunal found he also lied about the potential benefits. 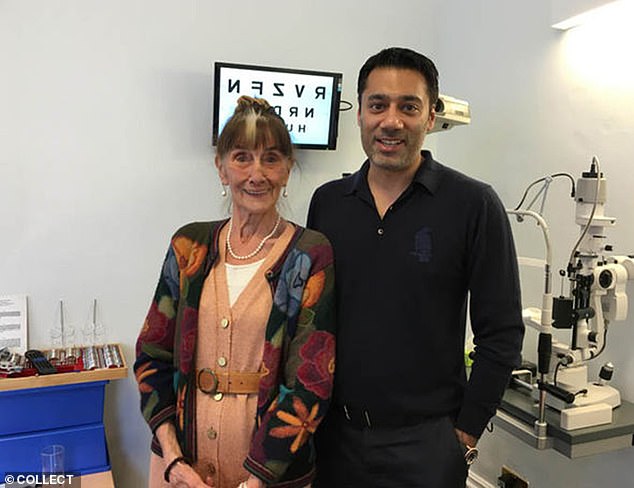 Bobby Qureshi is pictured above with actress June Brown. Reports this year suggested Ms Brown, 92, now can’t read, after her AMD naturally progressed, and instead relies on an Amazon Alexa voice assistant to read her newspaper headlines

Now, in a dramatic fall from grace, the wealthy doctor will no longer be allowed to practise in Britain.

Arrogant Qureshi has consistently denied any wrongdoing. Indeed, he blamed the scores of complaints from patients which flooded into the General Medical Council, UK charity the Macular Society and this newspaper on ‘hostile actions’ from competitors, and colleagues jealous of his success.

He even tried to cover up complaints by gagging staff and patients with controversial non-disclosure agreements, or NDAs, we can now reveal.

One patient told the tribunal she was offered a ‘goodwill gesture’ of £3,000 provided she signed a confidentiality agreement about her care.

Another witness in the case against Qureshi, former Mayor of Westminster, Harvey Marshall, was offered £8,000 compensation after one lens slipped ‘provided you don’t speak to people’. 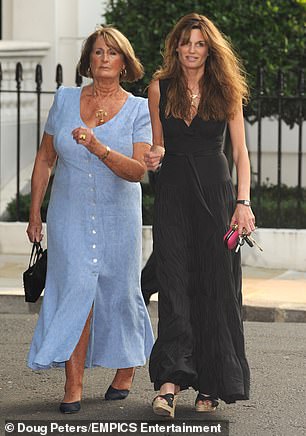 Jemima Khan and her mother Lady Annabel Goldsmith are pictured above

He turned that down but later agreed to a gagging order. At least three former members of staff at the London Eye Hospital have also confirmed they signed such documents.

After hearing the harrowing and strikingly similar testimonies of 24 patients, a panel from the Medical Professionals Tribunal Service concluded that erasing Qureshi from the register ‘was the only appropriate sanction… to protect patients’.

Damningly, they criticised Qureshi for failing to express any regret or remorse for the ‘obvious distress’ he had caused.

The panel added: ‘Even if Mr Qureshi did not consider that he had done anything wrong, his apparent lack of empathy or understanding of his patients’ disappointment and distress was striking.’

Several whistleblowers have now spoken to this newspaper to further expose the total disregard Qureshi had for his patients.

They were simply ‘cash machines’ to him, one said, who willingly handed over huge sums of money – which Qureshi is said to have used to fund a lavish lifestyle and develop his experimental lenses.

One said: ‘Complaints mounted but Bobby didn’t seem to care – he’d rather not work with patients at all and described them as whingers.’

It emerged during the tribunal hearing that some patients should not have been offered eye surgery at all, as it would not help them.

In some cases Qureshi treated them anyway – and his main reason was financial, the tribunal found.

By accepting almost every patient who paid £350 for a consultation, he raised vast sums. The lenses were ‘novel’, the tribunal found and the risks associated with them were ‘uncertain’. But Qureshi used the money from patients to further fund the development of the technology, a source said. 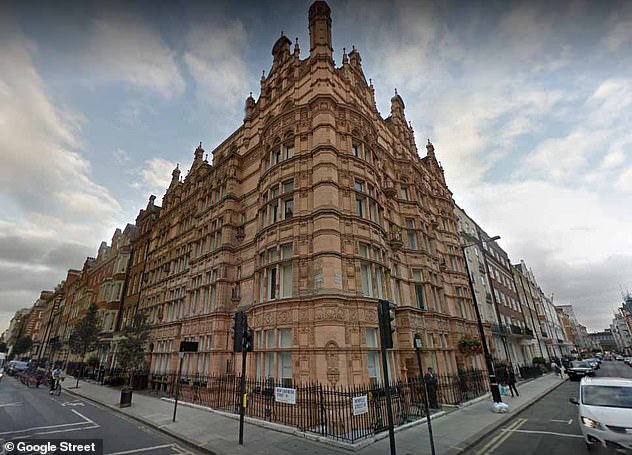 His financial arrangements will now come under the microscope as administrators for the London Eye Hospital, which is being wound down, battle to recover £1.2 million debts owed to dozens of creditors and at least 25 patients. The hospital is pictured above on Google Maps

At the same time that patients were being charged up to £25,000 for procedures, Mr Qureshi was offering discounts to celebrities and their families who, after successful surgery, then endorsed the lenses in the press.

He further built his media profile by appearing on chat shows and engaging PR firms to send out press releases featuring his innovations and opinions. He told the tribunal: ‘I have never once actually approached [journalists] directly myself. Journalists would call me.’

But when The Mail on Sunday told Mr Qureshi we planned to run an exposé of his conduct in April 2017, he arranged for a story involving actress June Brown, who plays Dot Cotton in the long-running BBC soap EastEnders, to be placed in another Sunday newspaper in a bid to dilute any negative fallout.

After her procedure, Ms Brown, claimed the results were ‘astonishing’ and said: ‘I can see people’s faces and recognise my children again. I can read again.’

However, reports this year suggested Ms Brown, 92, now can’t read, after her AMD naturally progressed, and instead relies on an Amazon Alexa voice assistant to read her newspaper headlines.

Cathy Yelf, chief executive of the Macular Society, said: ‘It is shocking that a doctor could be found to put profit ahead of his patients’ safety to the extent that Mr Qureshi did. He exploited extremely vulnerable people who were desperate to save their sight, knowing that he could not deliver on his promises.’

Qureshi, a father of three boys, is known to have lived a lavish lifestyle, employing two full-time chauffeurs to drive him around London in luxury cars.

He is based in Dubai and Monaco, where he tells friends he mixes with retail tycoon Sir Philip Green. Until recently he owned a £1.5 million flat near Harrods.

One source said: ‘Bobby bragged not just of being the world’s most successful ophthalmologist but a direct descendent of the Prophet Mohammed. He also told people his family was related to the King of Jordan.’

He is said to have preserved his tax-free status as a ‘non-dom’ by flying into London for the day to operate on around a dozen patients, earning the hospital up to £300,000. He would then fly out of the UK to avoid an overnight stay, for tax purposes.

The source said: ‘On operating days at the clinic, he’d herd the patients through like cattle so he could maintain his tax-free status.’

All the while, patients were struggling to get refunds when they complained about procedures that had gone wrong or failed to work.

Brian Nash went ‘virtually blind’ while waiting eight months for a refund of £7,500, having cancelled his planned surgery because it took so long to get an appointment. He died in 2017. 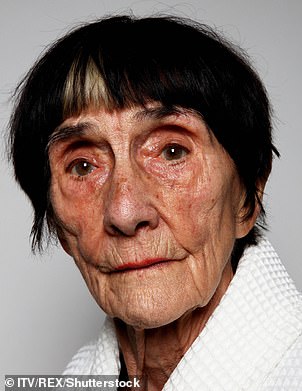 When The Mail on Sunday told Mr Qureshi we planned to run an exposé of his conduct in April 2017, he arranged for a story involving actress June Brown, above, who plays Dot Cotton in the long-running BBC soap EastEnders, to be placed in another Sunday newspaper in a bid to dilute any negative fallout

His stepdaughter, Wendy Hussein, said: ‘He was left feeling foolish after being caught up in what seemed to him to be a scam – not good when you’re 78 and vulnerable.’

Helen Carter said her elderly mother waited 11 months for a refund, only for the cheque to bounce, while another complainant wrote on the hospital’s Facebook page that her mother-in-law had paid £7,000 and waited six months without an appointment.

Yet accounts show – and Qureshi has openly bragged – that the hospital was highly profitable. In 2013, it was valued at over £100 million.

And the profit margins were huge. While Qureshi charged patients up to £13,500 per eye, sources told this newspaper he paid as little as £800 for each lens.

His financial arrangements will now come under the microscope as administrators for the London Eye Hospital, which is being wound down, battle to recover £1.2 million debts owed to dozens of creditors and at least 25 patients.

A tax bill of more than £185,000 remains unpaid, and a significant number of patients are understood to be launching legal claims.

Qureshi resigned as a director of the London Eye Hospital in May 2018, but remains sole director of a sister company, LEH Pharma, which lists assets of £850 million.

Separate documents filed at Companies House reveal administrators for the hospital are investigating concerns raised by creditors about the company’s conduct. The administrators have submitted a report on past and present directors to Ministers.

The decision to strike off Qureshi has been welcomed by patients, but many of them are still out of pocket and left with vision that has failed to improve. Frederick Lynch, a former interior designer whose vision is now cloudy and indistinct, described Qureshi as ‘a greedy, arrogant charlatan’ who blighted the lives of his victims and treated patients with contempt.

Margaret Harvie, 79, whose AMD naturally worsened and is now registered blind, was subjected to an ‘aggressive’ and ‘distressing’ experience during a meeting with Qureshi in which he insisted the £25,000 operation had restored her ability to read when, in fact, it had not. The tribunal heard he insisted his surgery was ‘pristine’ and told her: ‘I am a world-famous ophthalmologist. Are you trying to say you know more than me?’

Speaking on behalf of Qureshi at the hearing, barrister Russell Davies said his client ‘continues to deny misconduct’.

The tribunal found he was a surgeon of ‘considerable skill and experience’ and that his lenses had the potential to benefit patients in certain circumstances.

Qureshi has 28 days to appeal before his registration is erased.

In a statement, he said: ‘I am hugely disappointed by the tribunal’s findings and my lawyers are working on an appeal. I believe that I have been the subject of an orchestrated campaign driven by those with rival commercial interests.

‘I have been advised not to comment further pending the outcome of the appeal.’