Did the five-day delay ruin England’s second lockdown? Top scientist fears lag before national intervention ‘has triggered a slight spike in cases that will take the whole month to reverse’ 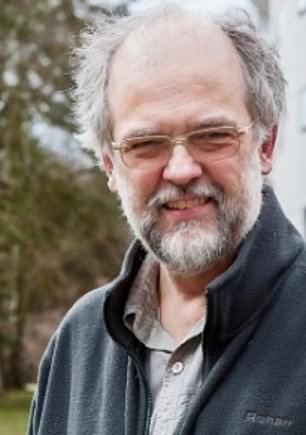 Professor Paul Hunter, an epidemiologist at the University of East Anglia, fears the effects of England’s second coronavirus lockdown could be nullified

The benefits of England’s second lockdown may have been nullified due to Number 10’s decision to announce the intervention five days before enforcing it, a top expert has warned.

Boris Johnson revealed the country was retreating back into a national shutdown on October 31 to ‘reset’ the epidemic and give hospitals extra breathing room heading into winter – but the measure did not come into effect until November 5.

The UK Government was forced to announce the second lockdown on Halloween after news of the intervention was leaked to newspapers the night before. It is unclear when Mr Johnson had planned to break the news officially.

But it led to a frenzy of Brits rushing to pubs and restaurants for a pre-lockdown blowout that has been blamed for a slight uptick in new Covid-19 infections and hospitalisations.

Professor Paul Hunter, an epidemiologist at the University of East Anglia, said the increase in social interactions had fuelled a mini-Covid resurgence after weeks of plateauing infections. He fears the entire month-long lockdown will be spent undoing the damage caused by the five-day delay.

Professor Hunter told MailOnline: ‘Both case numbers in UK (which had levelled off pre-lockdown) and hospitalisations in England (which were starting to level off) have surged again.

‘I can’t think of what else could have driven this surge than increased social mixing in the five days before lockdown two.

‘I doubt we will see declines as rapidly as during April/May, so it may well take the most/all of this lockdown to reverse the impact of this pre-lockdown surge on cases and hospitalisations.’

Professor Hunter said whoever leaked the lockdown from inside Number 10 ‘will have contributed to a proportion of the unnecessary cases, hospitalisations and deaths’. 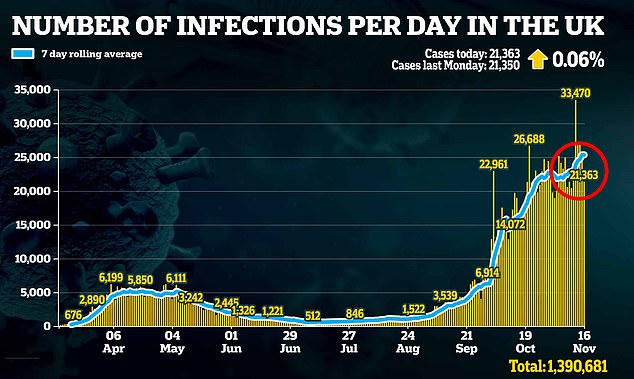 Average daily Covid-19 infections in the UK almost doubled during October, rising from about 11,000 a day at the beginning of the month to 20,000 by October 23. But they had started to flatline in the last week of the month, rising to just 22,500 by October 31, when the second national lockdown was announced.  After nearly a fortnight in lockdown, experts would expect infections to have started to fall – yet there are now more than 25,000 every day. Professor Hunter believes this is the aftermath of the five-day blowout 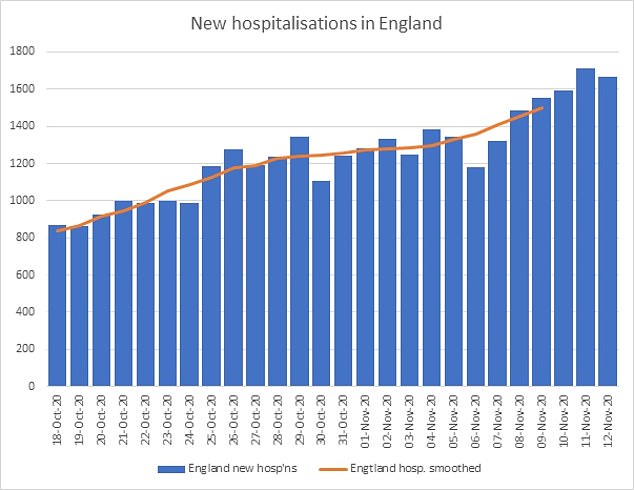 By October 31 – the day the second lockdown was announced – there were also on average 1,500 daily hospital admissions for Covid in the UK – which has now risen to 1,700

Average daily Covid-19 infections in the UK almost doubled during October, rising from about 11,000 a day at the beginning of the month to 20,000 by October 23.

But they had started to flatline in the last week of the month, rising to just 22,500 by October 31, when the second national lockdown was announced.

Many scientists, including Professor Hunter, believe the deceleration was the result of the tiered lockdown scheme taking effect.

After nearly a fortnight in lockdown, experts would expect infections to have started to fall – yet there are now more than 25,000 every day. Professor Hunter believes this is the aftermath of the five-day blowout.

But the lag in time it takes for a Covid patient to fall critically ill with the disease means the effect of blowout on deaths and hospitalisations may only start to feed into the data now. 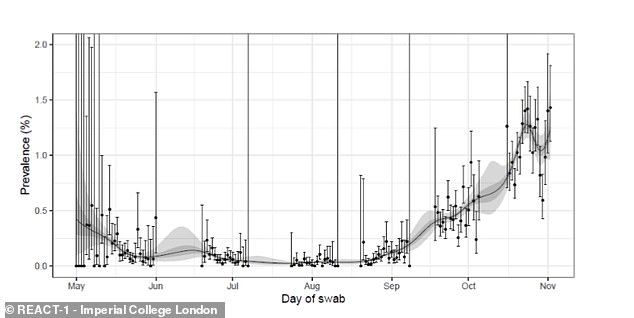 Christmas still in peril: Hancock warns it’s ‘too early’ to know if Covid cases will fall enough to lift national lockdown on December 2

Health Secretary Matt Hancock has warned it is ‘too early’ to know if coronavirus case numbers will have fallen enough to lift the England-wide lockdown on December 2.

Mr Hancock said ‘most of’ the positive tests which are emerging across the country now likely originated before the national shutdown started.

Health officials said yesterday afternoon that ‘if the lockdown is working’ then they should start to see case numbers start to fall ‘over the next week’.

The Health Secretary said ministers ‘absolutely hope to be able to replace the national lockdown with a tiered system’ next month – but he stopped short of guaranteeing that will happen as he placed Christmas in peril.

However, Susan Hopkins, a director of Public Health England, said the system of tiered restrictions in England would have to be ‘strengthened’ even if the current lockdown ends on December 2.

Boris Johnson has made clear that the regulations underpinning the national lockdown will expire on December 2 and MPs will be given a say on what happens next.

In a message to MPs, the Prime Minister said he was ‘more confident than ever that we will end these exceptional measures on December 2 and continue to pummel Covid into submission’.

However, there are fears that if case numbers are still high as the four-week deadline approaches then the PM could be forced into trying to extend the shutdown.

That would spark a furious Tory rebellion, with many of the PM’s backbenchers adamant they will not agree to keeping the national measures in place.

Appearing at a Downing Street press conference, Mr Hancock was asked whether lockdown will be extended if case numbers are still continuing to rise.

He said: ‘The answer is that it is too early for us to know what the number of cases will be as we come to the end of the current lockdown.

‘But what I would say is that at the moment most of the tests that we are getting back and most of the positive cases are from around the time that the lockdown came in.

‘But we absolutely hope to be able to replace the national lockdown with a tiered system similar to what we had before.

‘But we of course are assessing that and assessing how we can make sure that that will be effective.’

Professor Hunter said he was ‘shocked’ when the second lockdown was announced because the tiered system appeared to be working, particularly in Tier 3 areas and to a lesser extent in Tier 2.

He added: ‘I clearly don’t know for certain how the epidemic would have progressed without this lockdown, but if it had plateaued then we would not have seen much of a decline but certainly not the rapid and continuing increase that was being predicted a few weeks ago.

‘We saw in March/April (in the first lockdown) that case numbers and hospitalisations declined much more slowly then they had increased. [It is] difficult to be certain for case numbers because of [the] inadequate availability of testing.

‘We then had to wait 52 days before daily hospitalisations fell below 586. So roughly four weeks of lockdown to reverse one week of pre-lockdown growth.

‘So, this time around I doubt we will see declines as rapidly as during April/May.’

Although official cases being picked up the centralised testing system have only risen by about 3,000 since going into lockdown, officials would expect this number to be trending downwards by now, after being in lockdown for nearly a fortnight.

And a major Government-led study published last week found cases appeared to fall and then rise steeply again shortly before the national lockdown.

Professor Steve Riley and Professor Paul Elliott, the study leaders from Imperial College London who led the REACT-1 project, said they were unsure why the sudden uptick had occurred.

They admitted speculation about a major lockdown may have caused people to throw caution to the wind and go out more which then triggered a spike.

Other experts also claimed a rush to the pub before England’s second national lockdown may have fuelled a record rise in Covid cases.

Britain announced another 33,470 positive coronavirus cases last Thursday — despite indicators showing the outbreak was slowing down.

Professor Carl Heneghan, director of the Centre of Evidence-Based Medicine at Oxford University, told the Telegraph: ‘These figures are going through the roof, and it’s not really surprising when we saw scenes like Christmas Eve last week before we went into lockdown.

‘The problem is when these policies are drawn up the Government assumes everyone will behave the same way, and they just don’t take account of the fact that many people saw it as a last chance to get out.’

Last night the Government announced England would need to remain in an even stricter form of the earlier three-tiered system next month when the country comes out of lockdown.

It was an admission that the national intervention may not drive down transmission as low as some had hoped.

Areas in Tier 1 were the only places where residents were allowed to meet up with people who they didn’t live with.

Speaking at a Downing Street press conference, Dr Hopkins said: ‘We see very little effect from Tier one. When we look at what the tiers may be in the future we will have to think about strengthening them in order to get us through the winter months until the vaccine is available for everyone.’

She suggested that ‘if the lockdown is working, we will start to see cases decline over the next week’. If it doesn’t, then lifting the rules would be at risk, she added.

Dr Hopkins added: ‘As long as we start seeing cases decline we can start making a judgement about what are the right decisions.’

There have been rumblings that Number 10 is looking to add a fourth tier to the system in December.

Tier 4 could potentially mirror the  national lockdown England has at the moment, with non-essential shops shut and people banned from all but essential travel.

Housing Secretary Robert Jenrick delivered a strong hint that the levels of local restrictions will be bolstered even if the national curbs are lifted as scheduled on December 2.

He suggested some extra measures taken in Nottinghamshire – such as a bar on alcohol sales after 9pm – could be ’embedded’ in the arrangements.

And he said no decision had been taken on whether to tighten the lowest Tier One, after health chiefs branded it ineffective. That could potentially mean families being prevented from gathering indoors over the festive season.

Pressed on the issue in the Commons this afternoon, Health Secretary Matt Hancock refused to kill off the idea, saying it was ‘too early to do the analysis’. We will remain vigilant,’ he told MPs.

In a round of interviews, Mr Jenrick also signalled regions, rather than individual towns and cities, will be subject to the same Tiers, to make them more ‘consistent’.

And he said there will not be any ‘definitive’ decision on the shape of the rules post-December 2 until the end of this month.

He even refused to confirm that the blanket lockdown will end on that date, merely saying the ‘hope and expectation’ was that it would.

However, Boris Johnson is under huge pressure from his own MPs to make the system looser than it was before.

There is a growing clamour for children aged under 12 to be exempted from the Rule of Six limit on people meeting up, as is already the case in other parts of the UK. Sir Graham Brady, chair of the powerful 1922 committee said ‘common sense’ changes were needed.