This is where the magic happens with Carson Daly & @DylanDreyerNBC 🪄 pic.twitter.com/DHIFTgSc5i

“Hello, everyone. My magic is a metaphor, a reminder that what you think is impossible can be achieved,” said Carson, who sported a black wig and a flowing white scarf in a nod to Copperfield’s signature look.

“You may have just noticed that I rose from a chair with nothing but my physical strength, but what if I told you I could make a human being rise using only the power of my mind,” he continued.

He then invited his lovely assistant, Adelaide — named after the famous early-20th-century illusionist, Adelaide Herrmann — to help him pull off his magical feat.

Dylan joined him on stage, sporting a sparkly tuxedo suit and a flapper-style black bob, and sat cross-legged on a chair.

“And here now to defy the laws of gravity, Adelaide,” Carson said. “Focus and rise!” 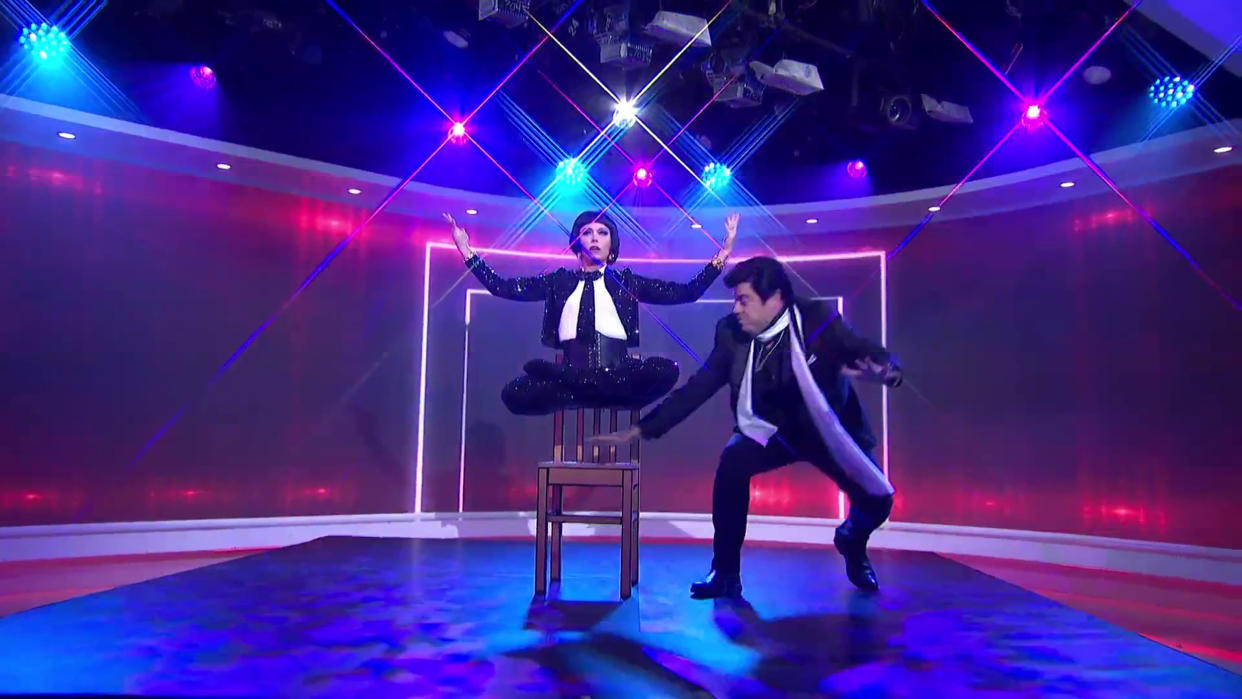 Dylan then floated up from the chair — and to prove the pure magic of the illusion, Carson waved his hands underneath her and above her to show there were no hidden wires involved.

The duo pulled off this classic levitation trick with some coaching from the real David Copperfield, who joined them via Zoom to weigh in on their performance — and long story short, he thinks they nailed it.

“I think you guys did such a great job,” said Copperfield, who was calling in from the MGM Grand Las Vegas, where he is currently performing.

“I get no nights off here,” Copperfield added. “Here at the MGM, I do 15 shows a week and if I want to take some nights off, I’d like you guys to come and fill in for me.”

While he remained tight-lipped about how the levitation works, he shared some general advice about being a great magician.

“It’s talk, respect and listen,” he told Carson with a smile. “TRL for short.”

The magical moment was part of the TODAY Halloween 2022 extravaganza, whose theme this year is TODAY in Vegas.

All of our anchors understood the assignment.
📸: Nate Congleton pic.twitter.com/MDdba2feT0

TODAY anchors went all out with their Vegas-inspired costumes, channeling legends including Celine Dion, Elvis and Sammy Davis Jr., and more.

Check out TODAY’s live Halloween blog to see all the costume reveals and best moments from the 2022 Halloween extravaganza!

This article was originally published on TODAY.com