On the Victorian Premier's first day off in 120 days, an unexpected talkback caller phoned in to ABC Radio Melbourne.

Daniel Andrews' 77-year-old mother Jan Andrews had called into one of her favourite shows – the Weekend Mornings program – to reflect on her son's time in the spotlight of an unprecedented crisis. 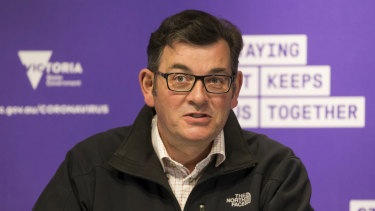 "It's a combination of everything really, that we've gotten through it," Ms Andrews said of her emotions now that the deadly second wave of COVID-19 has subsided. "Now we just have to be very, very mindful and do everything responsibly, because we never ever want to experience this again."

Like the rest of Victoria, the mother of the most powerful man in Victoria has suffered with the restrictions imposed to stem the spread of the virus – Ms Andrews, who lives in Wangaratta, has not seen her son, daughter in-law or grandchildren in person since last Christmas.

She's seen her son like the rest of us, on the podium in front of that familiar purple background, in his daily press conferences.

"I have watched every press conference. And some days I have thought, 'yes, you look OK', other days, I've taught 'oh Daniel you're looking very tired'," she said. "But he's strong."

Health Minister Martin Foley led the coronavirus briefing on Saturday in the Premier's absence. Ms Andrews said she purposely didn't ask her son what he had planned for today when she spoke to him on Thursday. 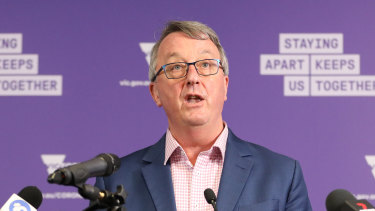 "I purposely didn't ask him because I thought no, that's their time," she told host Libbi Gorr. She suspected the family may have "just put the shutters up, turned the phones off and just be a family".

"Just to let him have a day of just doing whatever if it makes him happy."

Although she said she hadn't been able to figure out how to video call her son's family during their nearly 10 months apart, Ms Andrews was up to date on some of the internet 'meme' culture that has sprung up around the Premier, such as his fashion choices.

"I was quite surprised with the fascination that people seem to have when he wore the jacket, they thought,' Oh, that's good news'. And we put a suit on, 'Oh, we were in trouble'," she chuckled.

"But I think it just reflected that it was him as a person. He's just, he's an ordinary person doing the very, very best that he can do."

The interview ranged from the Premier's taste in music growing up (Midnight Oil was his favourite), to his likeness to his late father, Bob.

"[He was a] wonderful man. And had an amazing work ethic and both Cynthia, Daniel's sister Cynthia, they both have inherited their father's work ethic," she said.

And from his mother?

"I'm 77 years of age and I never thought that I would live through something like this [pandemic]," she said.

"And for my grandchildren, they will look back on this and remember it forever."