The denial could not have been more emphatic. Three months ago, the Daily Mail asked if Angela Rayner had been at the infamous Durham bash where Sir Keir Starmer glugged beer with cronies.

At the time, it was subject to a police inquiry amid claims Labour’s leader had broken lockdown rules.

The answer was blunt: Mrs Rayner – notorious for calling Tories ‘scum’ – was not there. This week, we discovered the opposite was true. Photographs revealed the deputy leader brazenly taking part in a Zoom rally at the constituency office.

Confronted with this irrefutable evidence yesterday, Labour made a humiliating confession: They’d made a mistake. 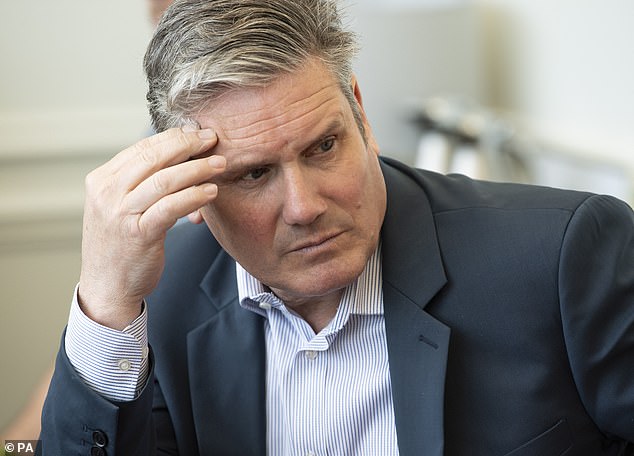 Now we know that when it comes to the highest standards, Sir Keir and his sermonising acolytes have got feet of clay

That the party has been caught shamelessly lying is emblematic of the rank hypocrisy pervading every aspect of this shifty affair.

In politics – as in normal life – standards matter. Labour’s leader certainly believes so. For months, he has launched scathing personal attacks on the Prime Minister over Partygate.

Indeed, when Boris Johnson received a fine for attending what the police deemed a lockdown-busting birthday gathering, he almost burst with puce-faced piety.

No matter that, in the midst of battling the pandemic that nearly killed him, Mr Johnson’s colleagues presented him with a cake (which never left its Tupperware).

For Sir Keir, this was a hanging offence. For flouting his own Covid rules, the PM should resign, he declared pompously. Boris did not ‘tell the truth’.

But now we know that when it comes to the highest standards, Sir Keir and his sermonising acolytes have got feet of clay.

They supported the draconian laws with an almost religious fervour. Now Sir Keir faces damaging questions over the event last April when indoor socialising was banned. Was it coincidence that party members held an online ‘quiz and social’ event on the evening he was there?

Risibly, he claims he was working. The very defence he called ‘pathetic’ when the PM used it. What a shameless hypocrite!

No wonder senior Tories are demanding detectives review their controversial decision to clear him of wrongdoing.

When the regulations should be interpreted consistently, the ruling smacks of double standards. And now we know that Labour’s No 1 and 2 were at the scene, isn’t it time the police woke up?

Labour have banged on about the importance of uncovering the truth about Partygate. But when it comes to being held to account for their own potential rule-breaking, they lash out.

How else to explain a Labour MP accosting a Tory backbencher in Parliament for having the temerity to ask the police to probe the Durham rally with the same rigour he demanded for the PM?

If it was so innocent, they’d surely welcome a scrupulous investigation to put the matter to bed.

Of course, this is not the first time Mrs Rayner has been caught out.

When The Mail on Sunday reported that she had joked about flashing her legs to try to distract Mr Johnson during PMQs, she furiously denounced the story as untrue.

How odd! Because she herself had earlier volunteered the information for a national podcast. And, as the Mail revealed, no fewer than four MPs – including one woman – say they heard her laughing about the same subject on the Commons terrace in January. Their powerful testimonies bring a unique force to this version of events.

Yesterday was a day of sleaze and shame for Labour. An ex-Cabinet minister was suspended for bullying and a shadow minister was accused of making disgusting sexual innuendos about a female MP.

For weeks, Labour MPs have clutched their metaphorical pearls so hard over Partygate their fingers have been in danger of breaking. Now we know they are just as bad.