DAILY MAIL COMMENT: Not too late for nurses to hit pause on strikes

Inspired by the fantasy pay demands of other health unions, junior doctors from the British Medical Association are threatening to strike in pursuit of a 26 per cent rise.

With nurses due to walk out on Thursday over a 19 per cent claim, it’s like some strange Alice in Wonderland auction to see who can come up with the most ludicrous figure.

They must know that no government could ever sanction such ruinous increases. The shadow health secretary, Wes Streeting, reaffirmed yesterday that Labour wouldn’t pay them either.

Yet nurses, ambulance drivers and now seemingly junior doctors are prepared to imperil the health of their patients, along with their reputation for being the caring profession, by walking off the job. 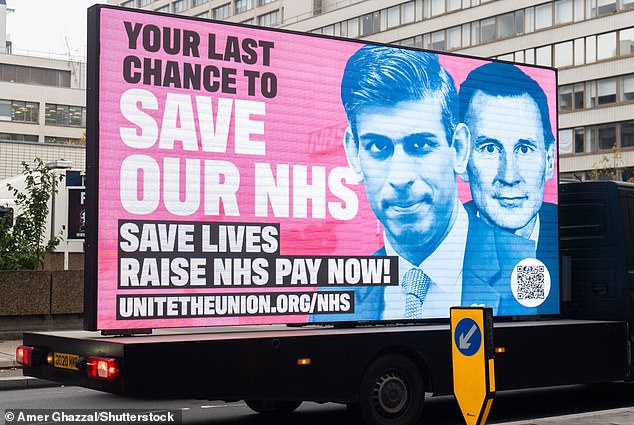 It doesn’t seem very long since the nation went into a series of hugely damaging lockdowns to ‘save the NHS’. Now the pandemic is over, is it too much to ask that we go back to the original arrangement whereby the NHS saves us?

These strikes couldn’t be happening at a worse time. Despite huge injections of extra funding, more than 7.2million people are on waiting lists for treatment in England – one in eight of the population.

Ambulance response times are at their worst ever, cancer patients are suffering scandalously long delays in receiving treatment, and getting a face-to-face GP appointment has become a privilege rather than a right. And the bitter weather is sure to exacerbate the usual NHS winter crisis.

It’s not too late for the Royal College of Nursing to step back from the brink. Unlike the eternally truculent BMA, it has a proud record of moderation and could set an example.

They have been awarded the full independent pay review recommendation of around 5 per cent, along with improvements in working conditions. They may not think it enough but it is not, as union bosses maintain, an insult. Many private sector workers would jump at it.

Mr Streeting’s intervention shows Labour support for NHS strikes is lukewarm at best. He was particularly critical of the BMA, which he described as ‘living on a different planet’.

The NHS is a service not a shrine, he said, and his party wouldn’t condone a ‘something for nothing’ culture. Any new NHS investment must be conditional on reform.

The Tories should fear this outbreak of Labour common sense. It may be just rhetoric but it brings into sharp focus the Government’s own reticence to tackle the strikers head on.

Meanwhile, the health unions should realise that these strikes have little or no public support, will achieve nothing and will hurt only patients. We urge them to think again before placing lives at risk.

The worst of Times

The New York Times seems to have an obsessive and rather mystifying vendetta against this country, routinely portraying us as a decaying, fractured nation in the grip of racial turmoil.

Usually its flights of anti-British fancy can be happily ignored. Sometimes, however, misinformation is damaging and must be challenged.

So former education secretary Michael Gove is right to call out the NYT’s gross misrepresentation of the ‘Trojan Horse’ scandal – in which hard-line Islamists tried to impose an extreme religious agenda on West Midlands schools – as a government-driven, Islamophobic witch-hunt.

Not only was its podcast report ‘replete with errors and omissions’, Mr Gove said, but it also gave succour to fundamentalists ‘who seek to impose their intolerant values on Muslim communities’.

The NYT likes to think of itself as the voice of liberal America. So why is it giving credibility to homophobic fanatics?