HORDES of travellers and shoppers have been flocking to train stations before strikes and weather chaos produce a double whammy to ruin New Year celebrations.

While an RMT walkout over Christmas ended on Boxing Day, travellers have been warned that services will remain “significantly disrupted” into the new year. 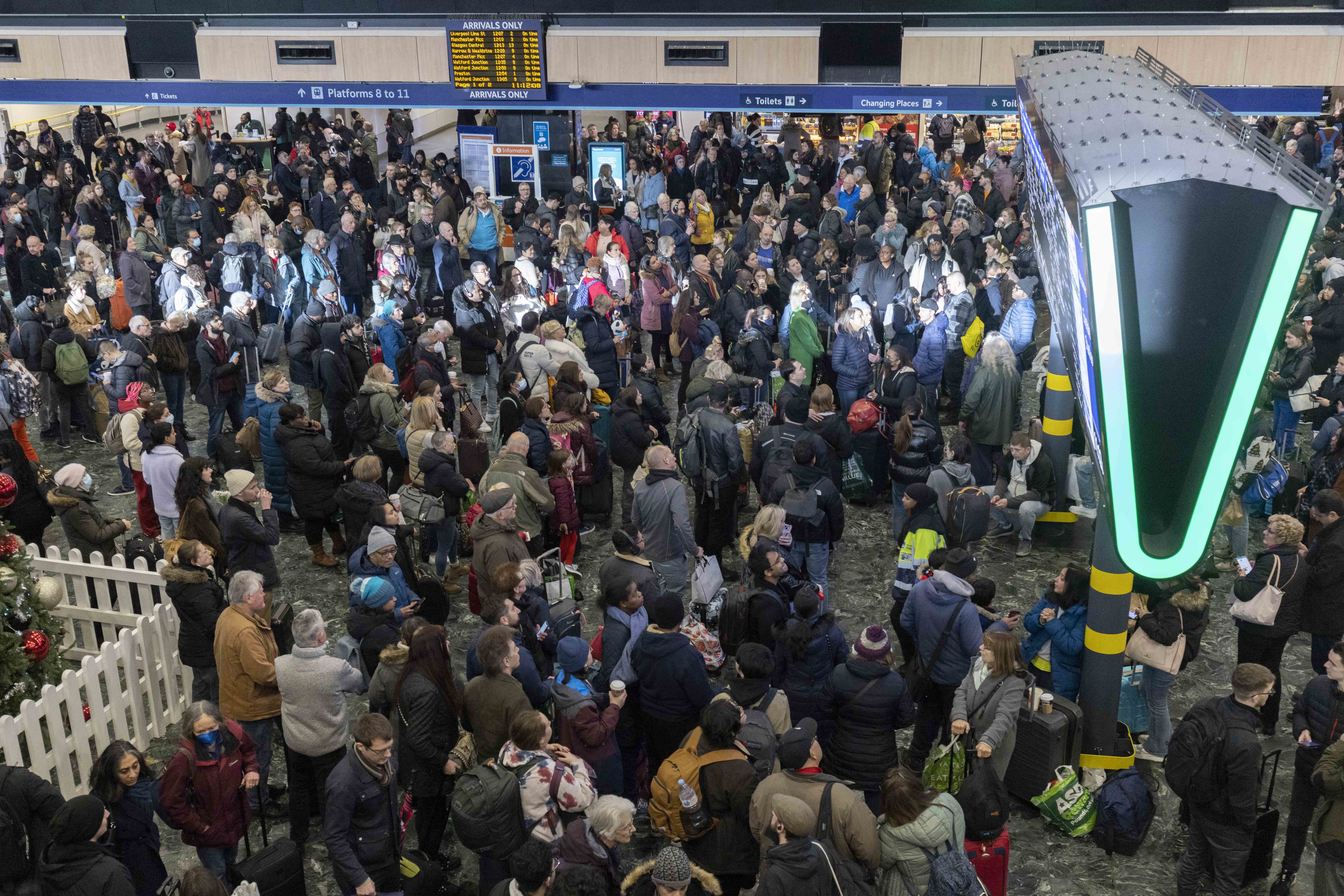 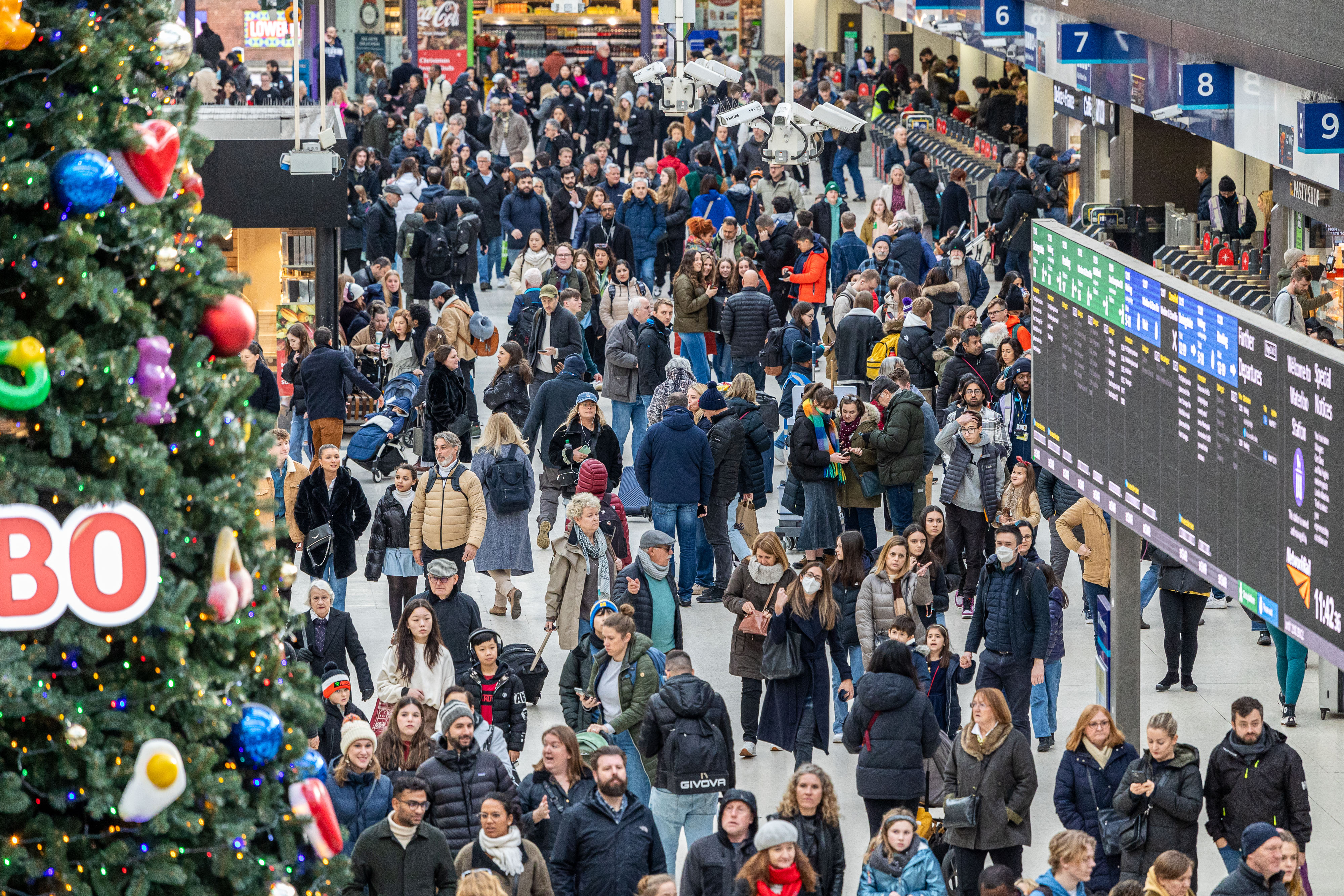 The weather is also likely to put a dampener on partygoers hoping to see in the New Year as the freezing weather bomb that has devastated the US is set to hammer the UK in the coming days – with life threatening amber flood warnings now in place.

The ongoing cost of living crisis could also impact the party atmosphere as many Brits could opt to curtail celebrations as they tighten their belts due to rising prices and energy bills.

UK Hospitality, a trade body that represents 740 companies, said that bookings for New Year’s Eve were lower than expected even though it was the first festive season without any Covid restrictions since 2019. 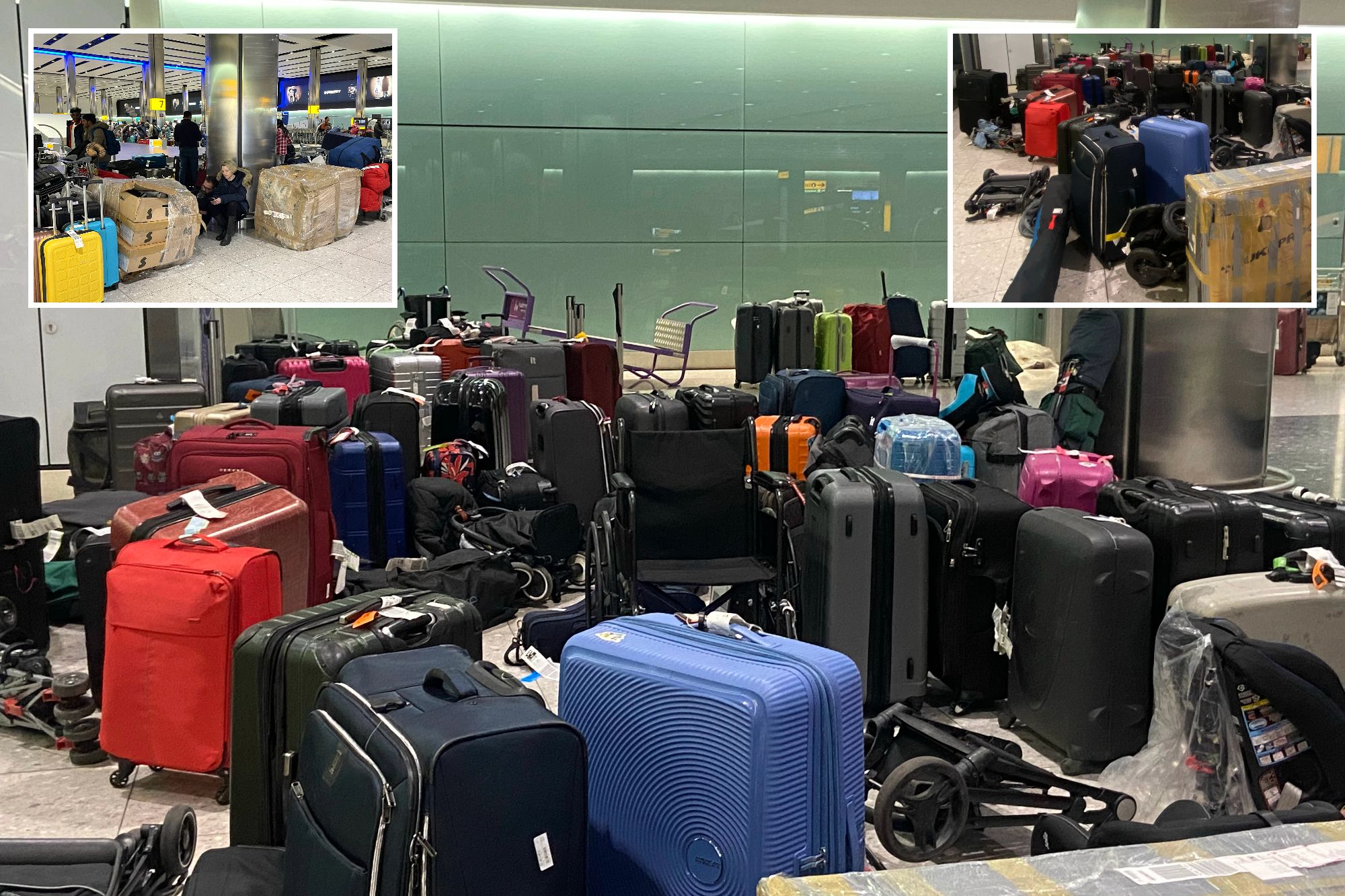 Heathrow chaos as suitcases ABANDONED across terminal due to strikes 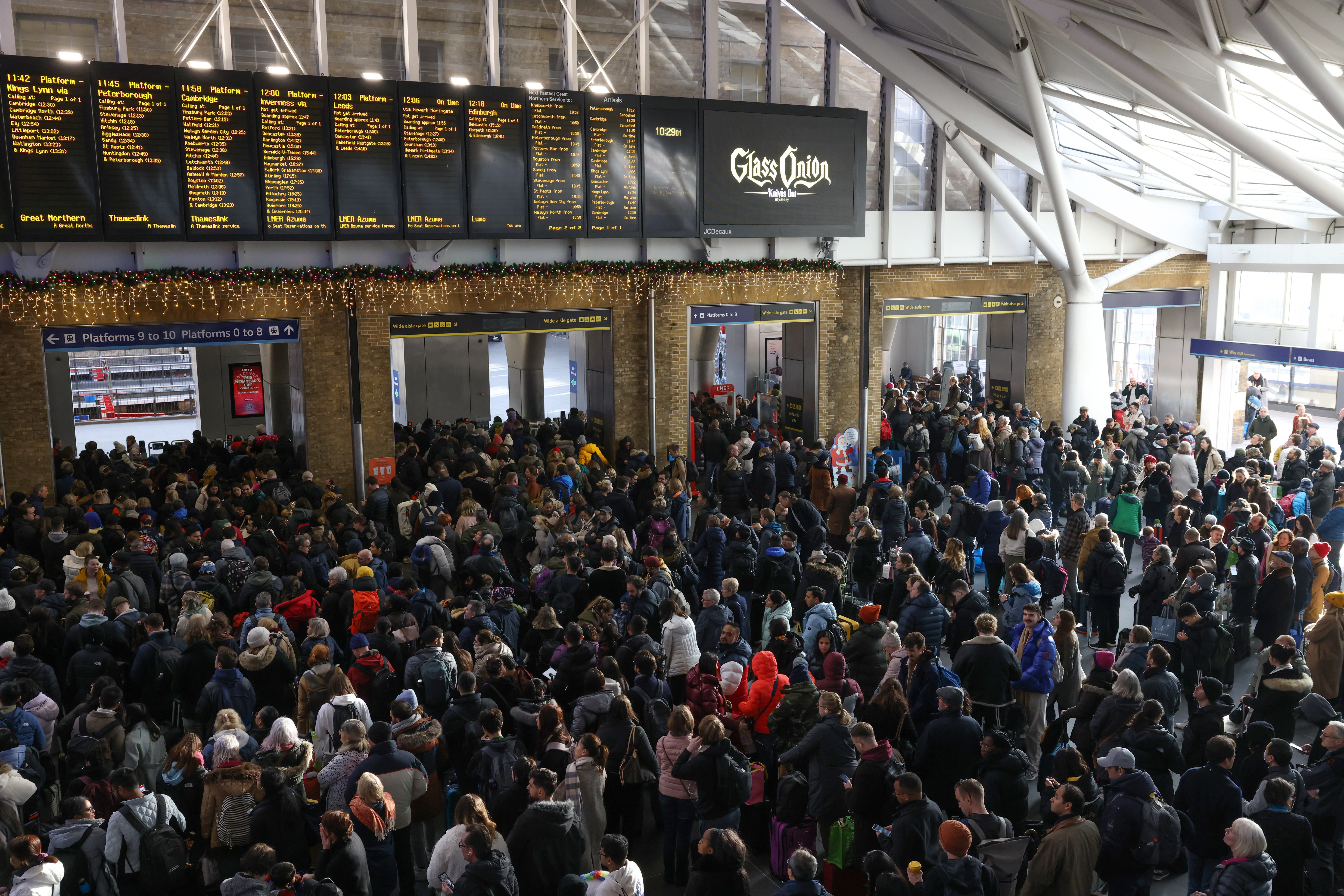 “We estimate that, in total, rail strikes this year will have cost the industry in the region of £2.3billion.

“This is a devastating amount for a sector still trying to recover from the pandemic and facing rising costs across the board, falling consumer confidence and a workforce crisis.”

Demand for train journeys is predicted to rise in the build-up to New Year’s Day, ahead of the next round of national rail strikes by the RMT and Aslef unions which are due to start on January 3.

Network Rail, though, has warned that journeys will be affected throughout the period, with fewer services and busier trains.

All the clues Stacey Solomon dropped to hint at her pregnancy

Passengers on some routes have been warned to avoid travelling by rail unless “absolutely necessary” until January 9.

Thousands of RMT members at Network Rail went on strike from 6pm on Christmas Eve until 6am yesterday.

Disruption has continued though despite the end of the strike and crowds of people were left waiting at train stations.

Hundreds of people crammed in King’s Cross and Paddington stations as services were delayed due to the late handover over of engineering works.

Disruption will also be compounded by a walkout of 1,000 Border Force passport control staff at airports such as Heathrow, Gatwick and Birmingham from today until Saturday.

Members of the TSSA union working for CrossCountry staged a 24-hour strike from 9pm on Boxing Day.

CrossCountry, which serves  a large area including the Midlands, Wales, northern England and Scotland, warned of disruption until January 7.

It has advised travellers to only use trains if necessary until that date.

A Department for Transport spokesman urged unions to reconsider and said: “After two years of virtual Christmases, the British public deserve better than to have their festive celebrations impacted by strikes.

“We urge them to step back, reconsider and get back round the table, so we can start 2023 by ending this damaging dispute.”

Severe weather conditions in the coming days will also add to the travel disruption.

The deadly cyclone that sent temperatures plunging across North America is also causing the UK to experience severe weather, the Met Office said.

An amber weather warning for heavy rainfall has been declared by the forecaster for parts of the UK from midnight tonight until 9PM on Friday.

Yellow warnings for snow and ice are also in place as the nation braces to be hit by the freezing weather bomb.

The severe deluge is expected to result in travel chaos as roads may flood while train and bus services will grind to a halt.

And New Year’s celebrations over the weekend will be washed out, as heavy rainfall and high winds will hit across much of the nation through Saturday. 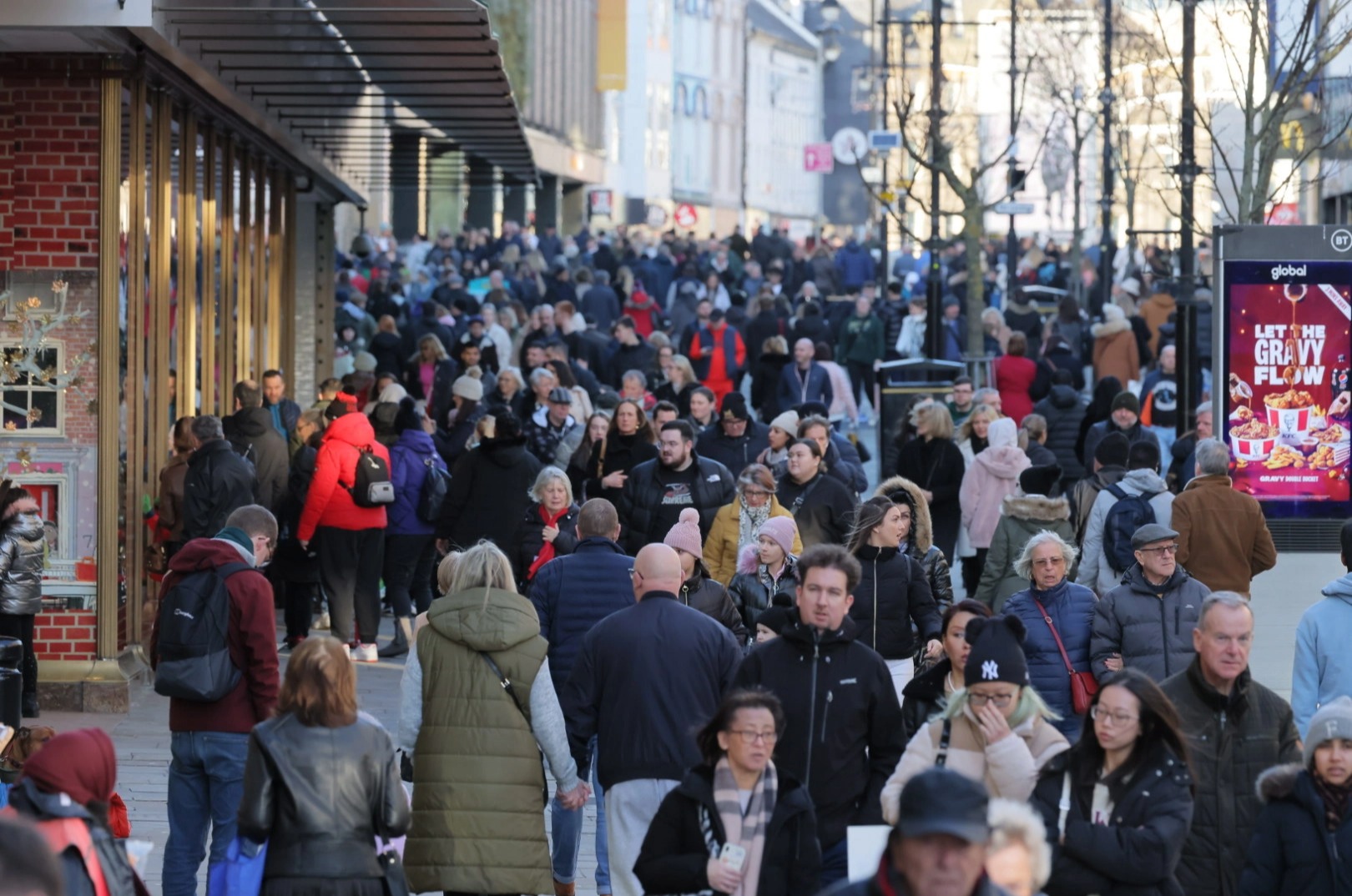 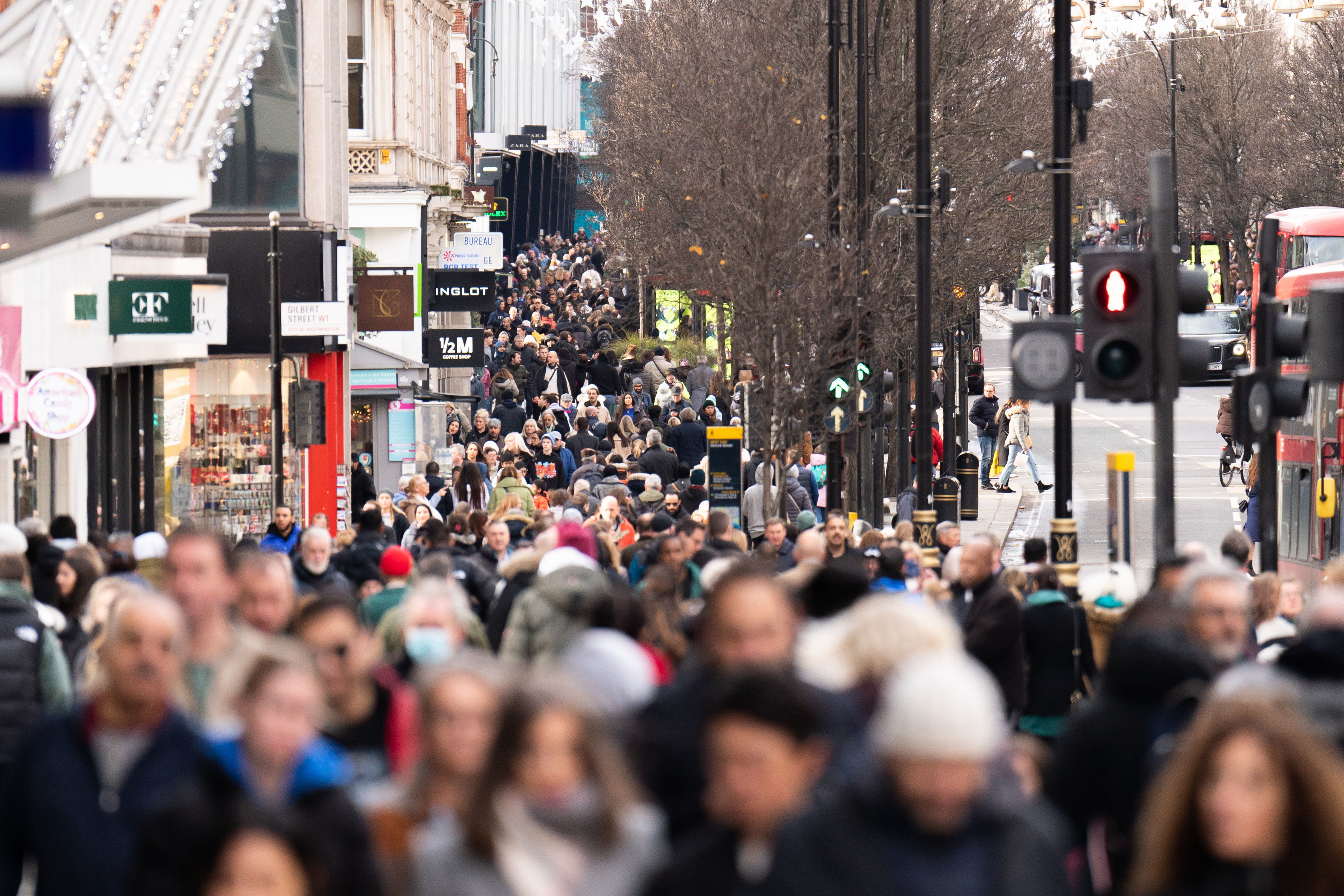