Crossbow killer, 39, is found guilty of murdering pensioner, 74, after targeting him as he was adjusting a satellite dish outside his home – as police probe potential £250,000 fraud against victim

A crossbow killer has been found guilty of the murder of a pensioner, who was shot in the early hours of Good Friday last year as he adjusted the satellite dish outside his home.

Mr Corrigan never recovered from the horrific injuries caused by the crossbow bolt and died in hospital three weeks later.

Sports therapist and martial arts expert Whall and co-defendant Gavin Jones, 36, were also convicted today of conspiracy to pervert the course of justice after Whall’s Land Rover Discovery was set on fire.

They are due to be sentenced on Friday.

Jurors were told they may never know why Mr Corrigan was murdered but heard that detectives are still investigating a potential £250,000 fraud committed against him before he was fatally shot.

The pensioner and his partner, Marie Bailey, 64, had previously handed over £250,000 to fraudster Richard Wyn Lewis.

On May 31, Whall and Jones were arrested at the Anglesey home of Mr Lewis, who remains under investigation, following ‘a dispute over money’. 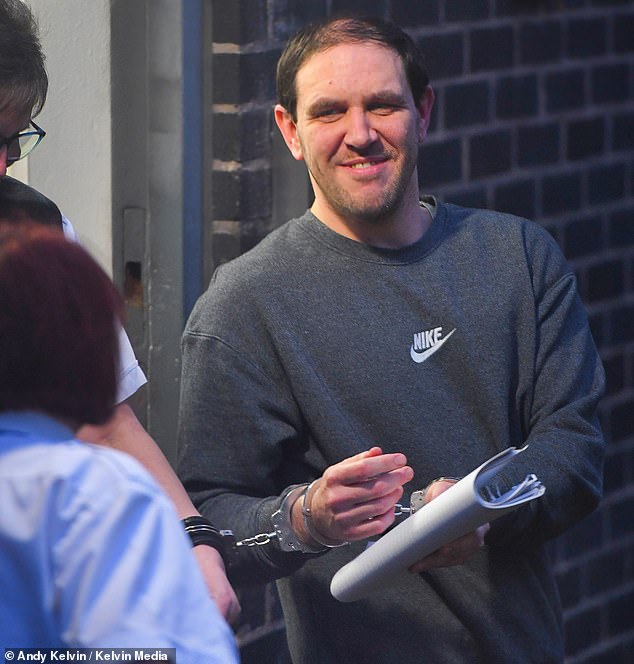 Terrence Whall, 39, (pictured leaving Mold Crown Court in January) has been found guilty of the murder of Gerald Corrigan, 74 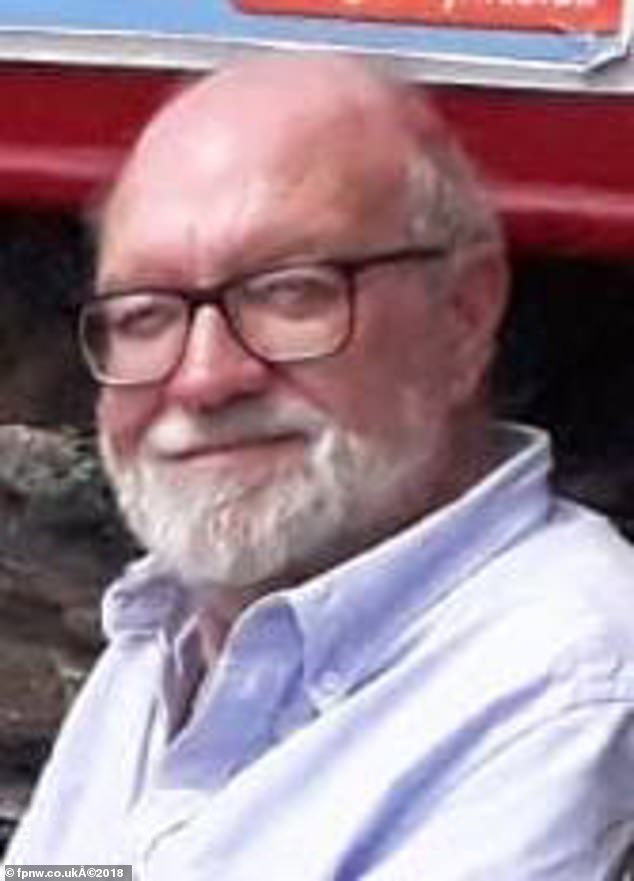 Mr Corrigan, 74, never recovered from his horrific injuries after getting shot with a crossbow outside his home and died in hospital three weeks later

Peter Rouch QC, prosecuting, said Whall’s association with Mr Lewis ‘may be of significance’ but David Elias QC, defending Whall, said there was no evidence linking the two before the shooting.

Whall, a twice-married tai chi instructor from east London, denied ever meeting Mr Corrigan, who died in hospital on May 11.

But the court heard that he hid outside the father-of-two’s remote home and waited for him to leave after the Sky signal was interfered with.

The crossbow bolt passed through the pensioner’s body, causing serious internal injuries and bruising his heart before shattering a bone in his arm as it left his body.

Whall’s movements on the night of the shooting were revealed by the GPS system from his state-of-the-art car, which was found burnt out in a disused quarry on June 3.

Information recovered from Jaguar Land Rover showed the car had been in the area of Mr Corrigan’s home, near South Stack, at the time of the shooting and on the previous night, when the prosecution allege Whall was ‘scoping out’ the property.

Whall initially told police he was at home on the night Mr Corrigan was shot but, when the GPS showed he was not, he said he was in the area because he was having a sexual encounter with friend Barry Williams. 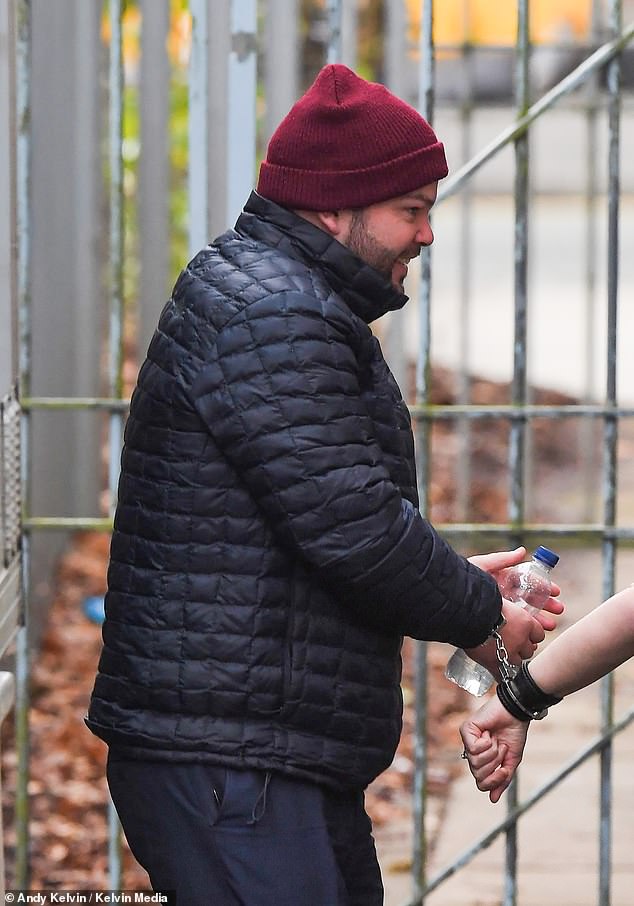 Whall and co-defendant Gavin Jones, 36 (pictured arriving at court last week), were also convicted today of conspiracy to pervert the course of justice

Partway through the trial, which lasted more than four weeks, Jones’s brother, Darren Jones, 41, and his friend, Martin Roberts, 34, pleaded guilty to the arson of the Land Rover Discovery.

Whall admitted owning a crossbow but told police he had sold it months before the killing and a new one he ordered online was not delivered until after the shooting.

The jury was told he had ordered crossbow bolts and broadheads identical to the one used to shoot Mr Corrigan in the months leading up to the shooting.

A punchbag, with holes in which suggested it had been used for target practice, was seized from the home Whall shared with partner Emma Roberts in Bryngwran, Anglesey.

Mr Corrigan was effectively a carer for Ms Bailey, who had MS, and moved to Anglesey more than 20 years ago after retiring from his job as a lecturer in photography and video in Lancashire.

The two men showed no reaction as the verdicts were returned.

In a statement, Mr Corrigan’s partner Ms Bailey said: ‘Gerry was my partner in life, my best friend, he meant the world to me.

‘Every day I am faced with the reality of no Gerry Corrigan in my life any more. Each day my heart is broken, I feel it breaking again and I can do nothing.

‘For Gerry’s family and friends I am sorry we have lost him, our lives poorer and somehow empty without him.

‘To that sad, twisted broken soul who murdered him, I say if you have an ounce of humanity, any sense of decency then you would tell us now why you have done this.’ 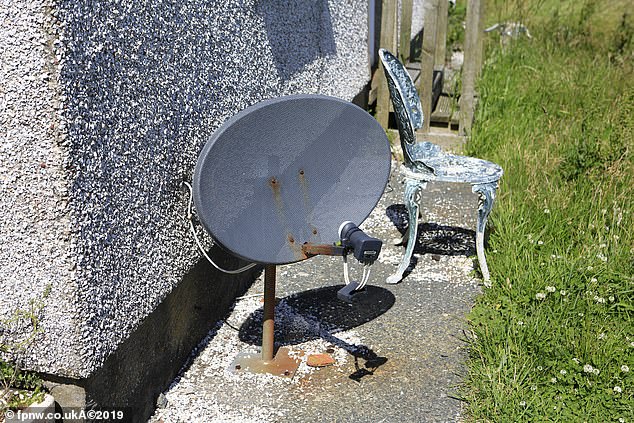 The home of Gerald Corrigan, showing the satellite dish he was trying to fix when he was shot

She urged anyone who might know why Whall had carried out the murder to come forward.

She added: ‘To you, I will say this, I am sorry for you and you have been given what you deserve.’

Mr Corrigan’s daughter Fiona said in statement: ‘Nothing can prepare you for a 7am telephone call on a bank holiday weekend to tell you your dad has been shot.’

She said: ‘The mental torture of having a loved one in critical care is not something I’d wish on anyone.

‘Being given a glimmer of hope just because for that hour, they had stabilised his blood pressure only to have it dashed because of the reality of the situation.

‘The injuries caused by a crossbow are not designed just to kill, they are designed to mutilate.

‘The particular weapon is designed for hunting to bring down… game and that is what my dad became. Prey. We may never know why.’

Miss Corrigan added: ‘The reason the news of the shooting was such a shock for us was that he was such a good man.

‘He enjoyed a lie in, a nice cup of tea and reading books.

‘He loved Laurel and Hardy films and photographing flowers and mountains.

‘Our lives won’t be the same without him.’

She thanked doctors, nurses, police and the local community for their help.

The court also heard that detectives are still investigating a potential £250,000 fraud committed against Mr Corrigan before he was fatally shot.

The jury heard evidence about Richard Wyn Lewis, described as a ‘con artist’, who allegedly took £250,000 from the pensioner and his partner Ms Bailey.

Mr Lewis remains under investigation for alleged fraud offences, along with two other people.

Ms Bailey, 64, told the court the alleged conman had been friends with Mr Corrigan for at least five years, and in 2018 the couple transferred £50,000 to him for the purchase of land, which it later emerged he had not bought.

They also made payments totalling £200,000 in cash to Mr Lewis, for work he said would be carried out on Mr Corrigan’s mother’s house, as well as £7,000 for a horse, which was supposed to be brought over from Ireland but never was.

Summing up the case, judge Mrs Justice Jefford said: ‘By the end, they had run out of money.’

About two years before Mr Corrigan’s death, the court heard, the couple allowed Mr Lewis to grow some cannabis plants in an outbuilding on their property, because Ms Bailey believed the drug helped with her MS.

Mr Corrigan was said to be ‘very angry’ when he discovered a large-scale cannabis farm, with fans and heaters, had been installed, and he told Mr Lewis to remove it.

When Mr Corrigan was shot, he told his partner to ‘call Wyn’, and Ms Bailey initially went to stay with Mr Lewis.

She said he told her not to tell police about the money they had given him.

The prosecution alleged Whall was connected to Mr Lewis, who has previous convictions for obtaining money by deception and producing cannabis.

In his evidence, Whall said of Mr Lewis: ‘He is a con artist. He preys on the elderly.’

In the week starting May 24, about two weeks after Mr Corrigan died in hospital, Whall made repeated trips to Mr Lewis’s house, sometimes in the middle of the night, and placed a tracker on a car being driven by Mr Lewis.

On May 31, police were called to Mr Lewis’s Anglesey home, and Whall and co-defendant Gavin Jones, convicted by the jury of conspiracy to pervert the course of justice, were arrested.

Whall told police they went there because Jones had loaned Mr Lewis £12,000 which had not been returned, while Jones said he was owed £2,000 for work he had done.

In evidence not heard by the jury, the court was told a handmade garotte was discovered in Whall’s car after his arrest, and his internet history showed he had bought piano wire online and googled ‘central nervous system neck injury’.

In his closing speech, Peter Rouch QC, prosecuting, said: ‘What we do know is, this incident between the three of them revolved around money, money that they, Gavin Jones and Terence Whall, wanted from Wyn Lewis.

‘Wyn Lewis, the man who had apparently conned Marie Bailey and Gerald Corrigan out of a large sum of money.’