Master craftsman, 90, who built iconic Speaker’s Chair in House of Commons after original seat was destroyed in the Blitz reveals how he hid his signature INSIDE it on an old betting slip

A 90-year-old who built the Speaker’s Chair in Parliament has revealed he stuffed his signature inside it – written on an old betting slip.

Michael Lashford-Spinks was a teenage apprentice when he helped create the iconic seat in the 1940s.

The original Speaker’s Chair, designed by A.W.N. Pugin in 1849, was destroyed when the House of Commons was bombed in 1941 during the Second World War.

But a replica of the gothic creation was created by Michael Lashford-Spinks, then 15, and some fellow craftsman.

And because he had no way to claim his work – he wrote his name on part of an old betting slip and wedged it into one of the cracks.

The betting slip is still there inside the chair, which is now used in the Commons chamber by current speaker Sir Lindsay Hoyle. 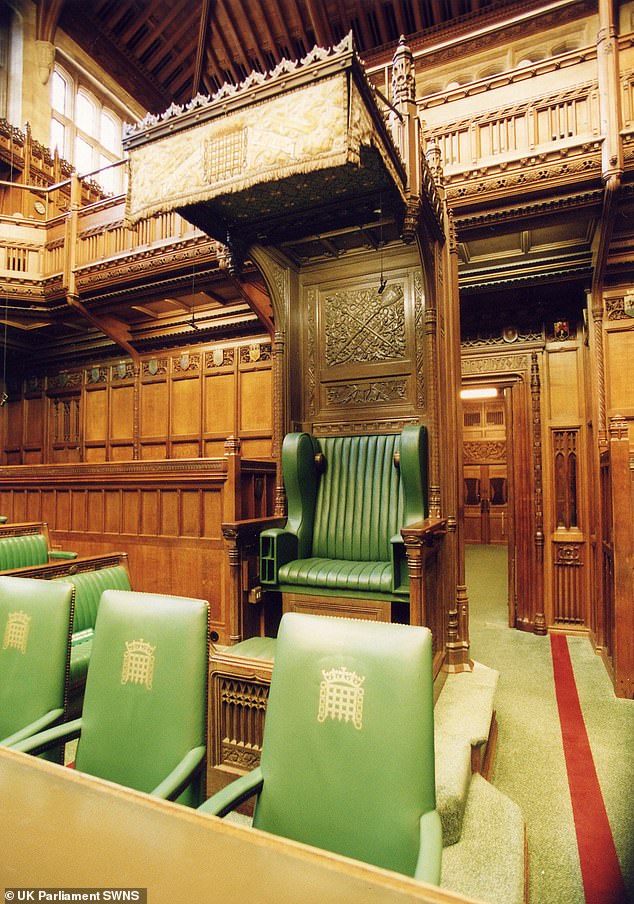 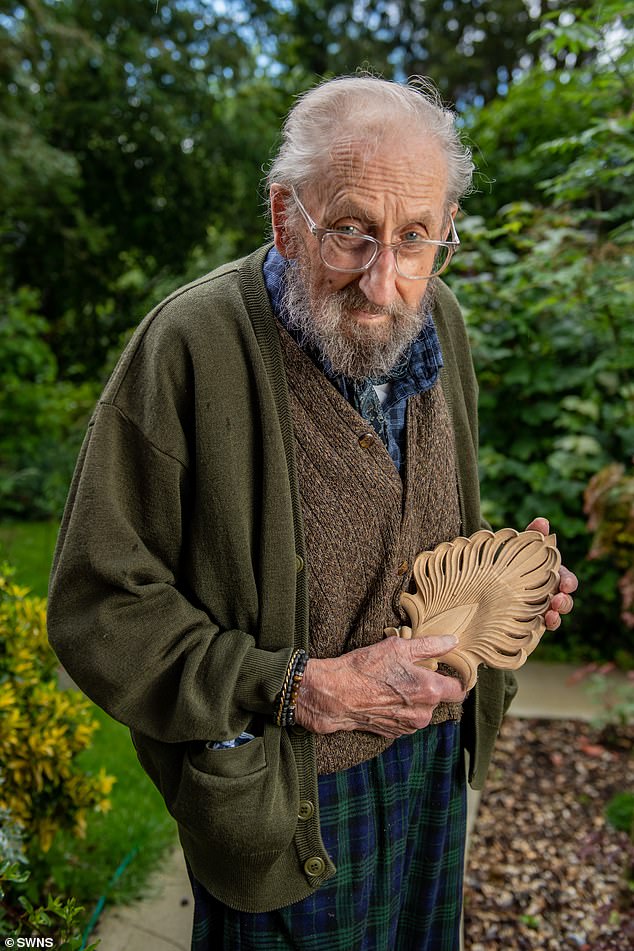 Michael Lashford-Spinks, Winchcombe, Gloucestershire, was a teenage apprentice when he helped create the iconic seat in the 1940s. Above: The craftsman posing with some of his woodwork

It is seen during the weekly Prime Minister’s Questions and other political debates.

Mr Lashford-Spinks is one of just two people still alive who worked on the iconic piece of furniture at the H. H. Martyn and Co. Ltd. factory in Cheltenham, Gloucestershire.

The chair was made from Blackbean wood from Australia and was based on the chair in Australia’s parliament. It was given as a gift to the British Parliament.

Mr Lashford-Spinks, from Winchcombe, Gloucestershire, was a woodcarver for the company.

He said: ‘I went straight from a rough school at 15 with hopes to be a cabinet maker.

‘But I was told they had enough of those and asked if I was interested in wood carving.

‘I had never heard of it but I came to realise I loved working with wood.

‘There were about 16 people who worked on the chair and only two of us are still alive – me and John Shepherd. 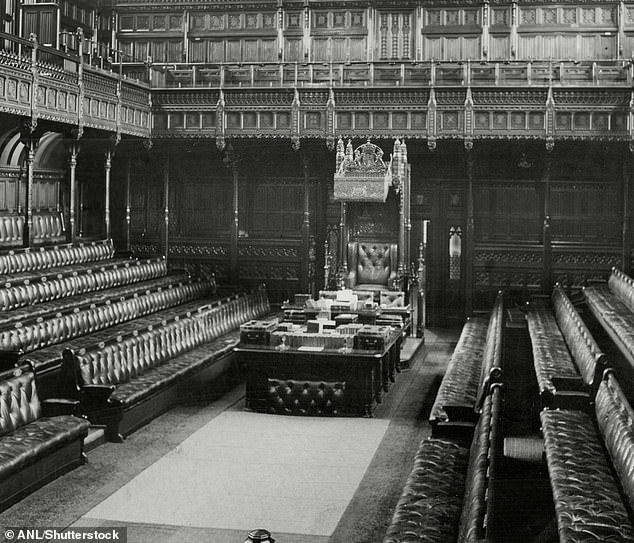 he original Speaker’s Chair, designed by A.W.N. Pugin in 1849, was destroyed when the House of Commons was bombed in 1941 during the Second World War. Above: The chair is seen in 1936 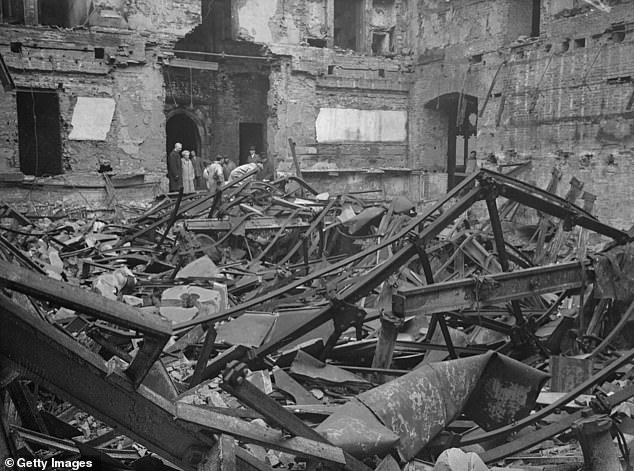 The House of Commons was destroyed by bombs that fell on the nights of May 10 and 11 in 1941. Above: The aftermath of the damage 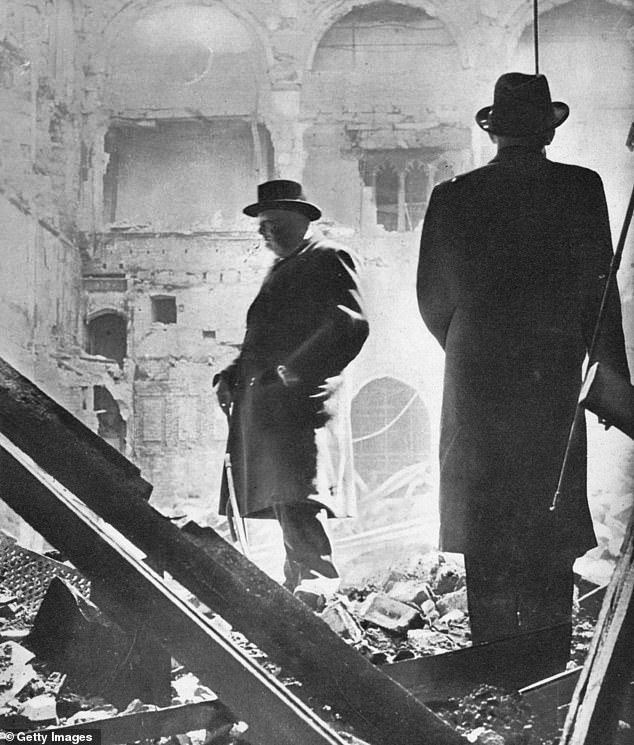 Incendiary bombs which fell on the nights of 10 and 11 May 1941 caused the greatest damage to the Palace of Westminster and the Commons Chamber was entirely destroyed by fire. Above: The then Prime Minister Sir Winston Churchill surveying the wreckage

‘Most of the markers and carvers at Martyn’s had name stamps – like mason marks – where you can claim your work.

‘After the chair is made, that’s when all of the decorative stuff gets added, and there was a brief moment where the chair had not been glued.

‘I was too poor to buy a name stamp – so I wrote my name on a betting slip and put it in one of the cracks of the chair before it was sealed up!’

The wood-carver worked on several parts of the Speaker’s chair, including the main columns. If it were to be opened up, evidence of his involvement would surface.

The craftsman later received a letter from George Thomas, Speaker from 1976 to 1983, who said he was ‘tickled’ by his creativity.

Mr Lashford-Spinks admitted: ‘All Mr Thomas knew was that I wrote it on a piece of paper.

‘I didn’t dare tell him it was actually written on a betting slip – he would not have approved of gambling.’

The craftsman had written to Mr Thomas to tell him about his hidden message when he retired as Speaker.

A Latin inscription on the chair reads: ‘The hand that deals justly is a sweet smelling ointment. A heedful and faithful mind is conscious of righteousness.

‘Justice is influenced neither by entreaties nor gifts. Liberty lies in the laws. Envy is the enemy of honour. Praise be to God.’

Across the back of the chair the words ‘The Gift of Australia’ are inscribed.

The original Houses of Parliament were established in the 11th-century but were destroyed by fire in 1834.

The incendiary bombs that destroyed the new chamber fell on the nights of May 10 and 11. They also set fire to the roof of Westminster Hall.

The fire that followed the bombs also spread to the Member’s Lobby and caused the ceiling to collapse. All that remained of the Commons was a smoking shell and the Lords was also damaged.

MPs and Lords initially moved to Westminster’s Church House and then from late June 1941 the Commons met in the Lords Chamber.

The Lords met in Parliament’s Robing Room. The current House of Commons was opened in October 1950.

The Daily Mail’s news report about the bombing of the Commons chamber made reference to the chair.

It read: ‘Gone is the high and gloriously carved and canopied Speaker’s Chair, to which generations of M.P.s raised their eyes in fear on their introduction to the House.’

Mr Lashford-Spinks was an apprentice at the company until 1951, at the start of what turned out to be a 22-year career as a craftsman. 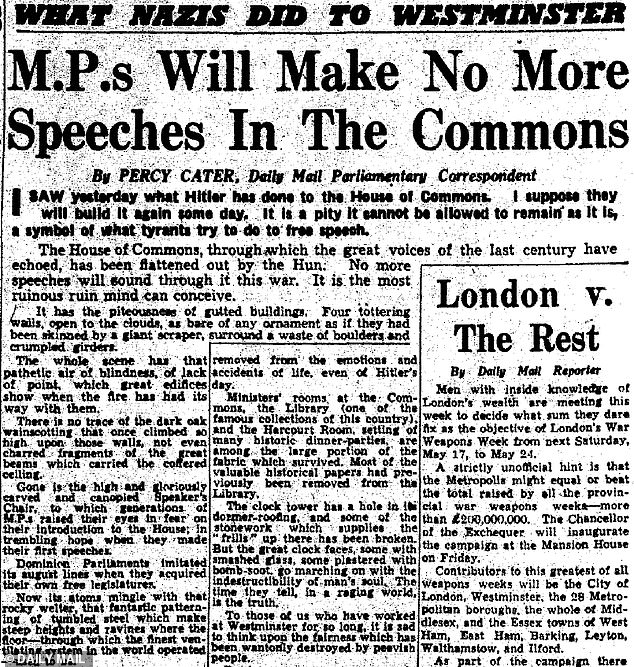 The Daily Mail’s news report about the bombing of the Commons chamber made reference to the chair. It read: ‘Gone is the high and gloriously carved and canopied Speaker’s Chair, to which generations of M.P.s raised their eyes in fear on their introduction to the House’ 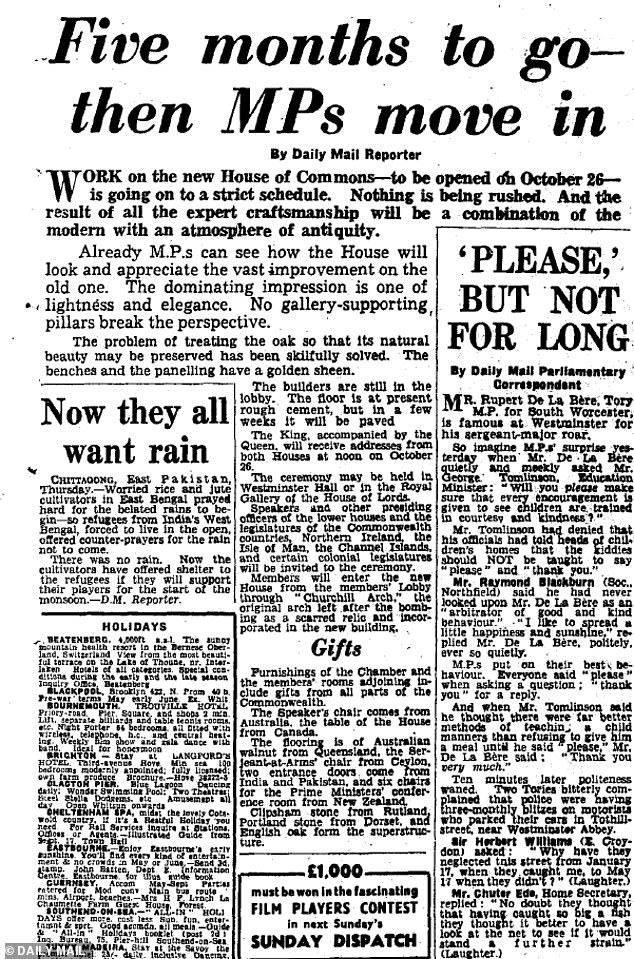 Another Daily Mail article, written in May 1950, told of how the re-built Commons chamber was nearing completion. It mentioned the new chair and how it was a gift from Australia, but made in the UK

‘It was just a job really, we were even told how long we had to spend on it,’ he said.

‘You could never hang about to look at your work, you always moved on so quickly and it worried me sometimes.

‘I was working straight after school in the evenings and had to cycle to Martyn’s everyday and we were still on rations.

‘I even remember collapsing one day from what we call hypothermia now’.

The experienced craftsman says he was involved in hundreds of projects during his time at Martyn’s and in subsequent freelance work.

These included items in Buckingham Palace, the glass ceiling of the Royal Palace in Baghdad and pots used in a James Bond film.

He also worked as a part-time driver.

Mr Lashford-Spinks, whose wife, Cynthia, died 18 months ago, also served in the army with the Royal Corps of Signals.

He now lives with his daughter, Lorraine, his granddaughter, Isha, and his dog.

He said: ‘I’ve crammed a lot into my old life but it’s been wonderful – I can say I’m bent like an old man now.

‘I really do hope nothing ever happens to that chair because my workshop is now my daughter’s bedroom and all my tools have gone.’