Manningham council in Melbourne's far east has bought the local RSL club to keep it free of poker machines and then launched a campaign to encourage 30 more municipalities to follow suit.

Templestowe RSL president Ron Twinning sidelined the Returned and Services League's Victorian branch and secretly lobbied Manningham Council to buy the club to avoid it being filled with poker machines or sold off to developers. 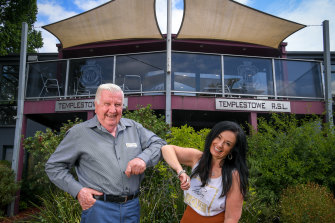 On Friday, the council bought the venue for $1.25 million, and on Tuesday night it voted to lease the club back to the local RSL for 20 years on condition that it prohibits the operation of poker machines.

Mr Twinning, who was formerly the club's treasurer for 10 years, came up with the idea after seeing the perilous state of the venue's finances. The 200-member Templestowe RSL is run by trustees, but in the event of financial failure, ownership would revert to the organisation's Victorian branch.

"If the state branch got a hold of the place, they might fill it all up and put pokies in it. I'm vehemently opposed to that," Mr Twinning said. "[They] have got a dismal record of just selling these places off to the highest bidder."

Manningham mayor Andrew Conlon said poker machines at seven venues in the municipality already ripped $58 million a year out of the community.

"Both parties were able to ensure that poker machines will never come to the booming Templestowe Village activity centre which is popular with diners right across the eastern suburbs," he said.

“[We] were well aware of RSL Victoria’s record over the past decade of promoting the pokies industry and even selling off failed venues to developers and distributing the proceeds of sales to prop up other RSL pokies venues, rather than better supporting traditional RSLs."

The council also voted unanimously for Cr Conlon to write to an estimated 30 Victorian councils which host RSL-branded poker machine venues, including problem gambling areas Whittlesea, Brimbank, Monash, Geelong and Dandenong, and tell them about the model.

Councillor Michelle Kleinert, who moved the motion, said the council would be a reliable and trustworthy landlord. The council will spend about $155,000 on upgrading the building.

"The beauty of this is it remains in the hands of our local community," she said.

Although he supported the motion, Cr Geoff Gough spoke against prohibiting poker machines in the club, arguing it was unnecessary.

The move was also strategic for the council as the site was the only privately owned piece of land at Templestowe Village.

Victorians lost $2.7 billion on poker machines in pubs and clubs in 2019, according to Victorian Commission for Gambling and Liquor Regulation.

Instead of hosting poker machines that contributed to social harm, Mr Twinning said RSLs should be for remembering those who had died fighting for their country and supporting returned soldiers, including decreasing suicide rates.

Three World War 1 veterans bought the land on Parker Street in 1920 and built a memorial hall with the help of the council, before part of the site was donated to the Templestowe RSL in 1954.

"It's gone full circle now and the building and the land has reverted back to the community," Mr Twinning said. "It's a fitting end."