Publicans 'overwhelming excitement' ahead of opening

Andy O’Brien, the venue manager at Melbourne’s oldest licensed hotel The Duke of Wellington, said the announcement that hospitality venues could reopen was "what we’ve all been waiting for and hoping for". 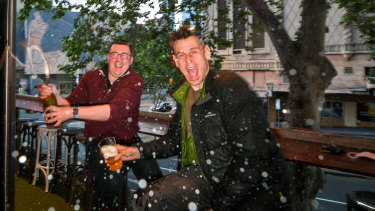 Under the changes, retail, restaurants, cafes and bars will open on Wednesday with a maximum of 20 people indoors and 10 people per space, and with a maximum of 50 people outdoors in total, with one person per two square metres. Beauty, personal services and tattooing will also reopen.

"There’s overwhelming excitement – our bookings hit 100 per cent capacity for this Saturday and Sunday within 30 minutes, the rest of the week is coming along steadily too," he said.

“Hospitality has really come together during this second lockdown. We’re really hopeful we can get to that next phase with more patrons, because hospitality really is the backbone of Melbourne at Christmas-time.”

Mr O’Brien said the pub would have dedicated guest check-in staff and contactless ordering as part of their COVID-safe plan.

“The pub has never been a safer environment considering all we learnt and implemented in June and July,” he said.

“We’ve been gearing up in the background, and we’re ready to rock and roll and get the people of Melbourne back into what they love – catching up with friends over a nice cold tap beer or wine.”

Fears of a second wave of COVID-19 in NSW and being forced back into lockdown are top of mind for three out of five voters in the state, with most also worried about a drawn-out recession.

An exclusive Ipsos poll for The Sydney Morning Herald and Nine News reveals 63 per cent of voters are concerned that NSW could follow Victoria and be hit with a high number of COVID-19 cases.

NSW had one new locally acquired case and three cases in hotel quarantine on Monday while Victoria recorded its first day in four months of no new cases, allowing it to ease restrictions. 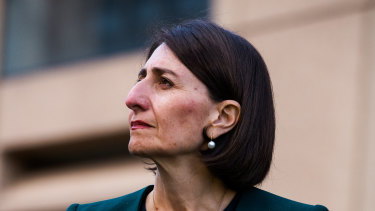 Gladys Berejiklian has an approval rating of 63 per cent after her handling of the pandemic.Credit:James Brickwood

NSW Health confirmed the locally acquired case in Sydney is a household contact of a positive test linked with the Oran Park cluster, which has been connected with 23 coronavirus cases.

Mental health is also highlighted, with 45 per cent believing their mental health has been affected "a great deal" or "fair amount" by the pandemic and the lockdown.

Younger people are more worried about their employment prospects than older groups.

Voters aged over 55 are significantly more concerned about catching the virus than others, and people born overseas are also more worried about getting COVID-19 (44 per cent) than those born in Australia (36 per cent).

Support for Premier Daniel Andrews remains solid, with just over half of Victorians backing his handling of the coronavirus pandemic despite months of tough lockdown restrictions and criticism over the failed hotel quarantine program.

In Jewel Topsfield and Sean Goodwin's report, an Ipsos poll commissioned by The Age and Nine News found 52 per cent of Victorians surveyed approved of the way Mr Andrews had performed his role, with 33 per cent disapproving.

The online poll conducted over three days last week before Mr Andrews' decision on Sunday to temporarily delay easing restrictions or Monday’s announcement that they would proceed this week. The poll's findings are devastating for the opposition.

Only 15 per cent approved of Opposition Leader Michael O'Brien's performance during the pandemic. His approval rating among even Coalition supporters surveyed was just 27 per cent.

In NSW, fears of a second wave of COVID-19 and being forced back into lockdown are top of mind for three out of five voters in the state, with most also worried about a drawn-out recession, Alexandra Smith reported.

The NSW poll for The Sydney Morning Herald and Nine News reveals 63 per cent of voters are concerned that NSW could follow Victoria and be hit with a high number of COVID-19 cases.

Premier Gladys Berejiklian's performance through the bushfires and the pandemic has given her a 63 per cent approval rating, with only 16 per cent of voters disapproving.

Melbourne’s gruelling 15 weeks of lockdown is ending, allowing the city’s shops, cafes, restaurants and pubs to reopen their doors from 11.59pm tonight and 5.5 million residents free again to leave their homes whenever they please.

Monday's announcement is intended to mark an end to the city's five month-battle with Australia's second wave of coronavirus infections which has cost nearly 800 lives, hundreds of thousands of jobs and tens of billions of dollars to the state's economy, with a long and uncertain recovery expected. 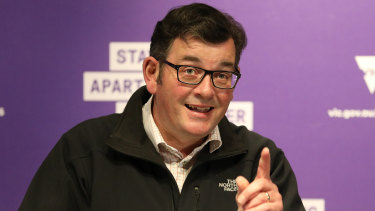 After enduring months of lockdown, Victorian Premier Daniel Andrews is craving something stronger than beer.Credit:Getty

Premier Daniel Andrews said on Monday that health authorities were confident the recent outbreak in Melbourne’s northern suburbs that threatened to derail the opening-up process was contained after more than 14,000 tests for the deadly virus returned no positive results.

An emotional Mr Andrews paid tribute to the "kindness and commitment and courage" shown by millions of Melburnians over the difficult recent months.

"We haven't had a zero case day for a long time, which is why it is emotional, because people have been through a lot," Mr Andrews said.

"None of this has been easy but Victorians have shown what they are made of, looking out for each other, protecting and caring for each other but also knowing that this virus does not discriminate."

Read the rest of the story here.

Good morning readers and welcome to Tuesday's coronavirus blog. It's Tammy Mills here, I'm usually the legal affairs reporter for The Age, but today I'll be running the blog.

I'm sure I'm not alone in saying it's a good morning to be in Melbourne after yesterday's excellent news. We had no new cases in Victoria and from 11.59 tonight, the city's gruelling 15 weeks of lockdown ends, with shops, cafes, restaurants and pubs reopening.

This photo, taken by Age photographer Eddie Jim last night, pretty much sums it up… 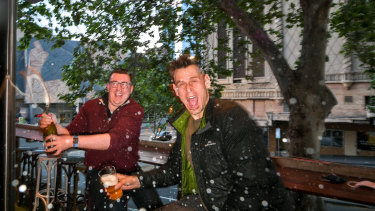 Thanks for tuning in with us and we'll keep you updated throughout the day.