Jeremy Corbyn applauded calls for the ‘dismantlement’ of Israel at a conference in 2011, newly revealed footage has revealed.

In a tirade about Israel, Mr Weiss accuses accuses ‘Zionists’ of having ‘occupied Palestine in 1948’.

He said: ‘(It would be) the end of the Zionist state that has kidnapped the name of Judaism, it is not a Jewish state.

‘We want a free Palestine which would under Palestinian rule, a peaceful dismantlement of the state so they can live together in harmony.’

As the speech ends, Mr Corbyn – then an obscure backbencher – can be seen applauding the remarks warmly. 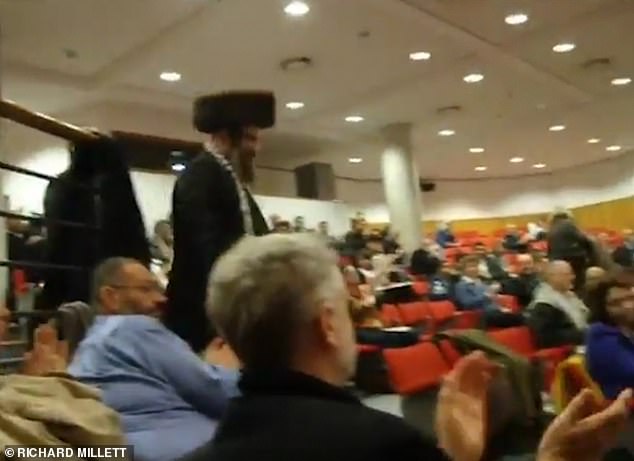 Jeremy Corbyn (centre) applauded calls for the ‘dismantlement’ of Israel at a conference in 2011, newly revealed footage has revealed 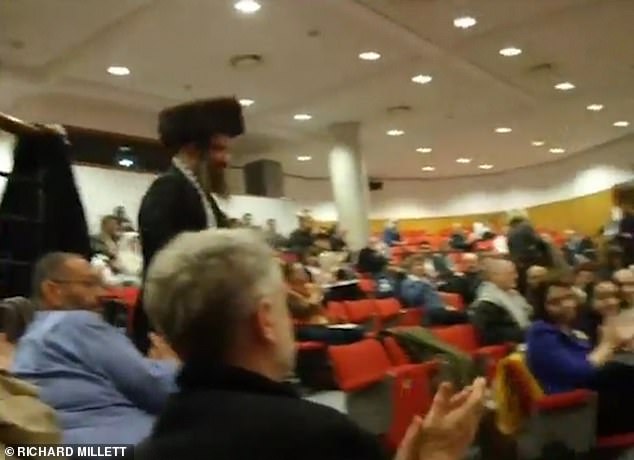 Tory MP Nigel Evans told MailOnline: ‘Leopards don’t change their spots even if they have been successful in changing their jobs.

‘The anti-Semitic overtones are well foundationed as evidenced by this appalling video.’

In his own speech to the conference, Mr Corbyn attacks British voters in Battersea and Milton Keynes for no re-electing pro-Palestinian MPs Martin Linton and Phyllis Starkey at the 2010 election.

He claims the ‘the electorate of Battersea made such a huge mistake’ before adding: ‘I condemn the people of Milton Keynes for the mistakes that they made in the May election.’

Mr Corbyn was slammed for his remarks by Labour MPs online.

Joan Ryan, the chairwoman of the Labour Friends of Israel, warned: ‘Always important to remember the electorate choose us not us them.’

Joan Ryan, the chairwoman of the Labour Friends of Israel, warning: ‘Always important to remember the electorate choose us not us them.’

‘If you turn the sound off, get a lip reader and watch it backwards, he clearly says ”I love the people of Milton Keynes”.’

A Labour spokesman said: ‘Jeremy Corbyn has a long and principled record of solidarity with the Palestinian people and he attended this public meeting to show his support for peace and justice in the Middle East.

‘He and the Labour Party support a two state solution to the conflict, with a secure Israel alongside a secure and viable Palestinian state.’

The anti-Semitism scandal has dogged Labour since Jeremy Corbyn was elected leader  in 2015.

Here is a timeline of the controversies:

Labour MP Naz Shah is suspended for anti-Semitic posts – including one in which she appeared to endorse calls for Israelis to be deported to the US.

She apologised and was given a formal warning.

Ken Livingstone goes on the radio to defend Ms Shah – but sparks fresh controversy by claiming that Hitler supported Zionism.

He is suspended by Labour but refuses to apologise and has repeated the claim many times.

A two-month inquiry by civil liberties campaigner Shami Chakrabarti finds that Labour is not overrun by anti-Semitism.

But the launch is overshadowed when Jewish Labour MP Ruth Smeeth flees it in tears after being accused by Corbyn supporter Marc Wadsworth of colluding with the press.

Critics accuse the report of being a whitewash and Ms Chakrabarti is widely criticised for accepting a peerage from Jeremy Corbyn shortly afterwards.

The Home Affairs Select Committee says Labour is guilty of incompetence over its handling of anti-Semitism and of creating a safe space for people with ‘vile attitudes towards Jewish people’.

It is revealed that Jeremy Corbyn defended an artist who painted an anti-Semitic mural and said the offensive art should be removed.

He apologises saying he did not properly look at the picture before he made the post.

Marc Wadsworth is expelled from Labour after being accused of anti-Semitism.

Meanwhile, Labour Jewish MPs tell of the anti-Semitic abuse they have suffered in a powerful parliamentary debate – and round on their leader for failing to tackle it.

In an angry diatribe at a meeting of Labour’s ruling executive committee, he said he was ‘amazed’ there was evidence party members hated Jews.

He claimed ‘some of these people in the Jewish community support Trump – they are Trump fanatics’ before shouting: ‘So I am not going to be lectured to by Trump fanatics making up duff information without any evidence at all.’

Jeremy Corbyn issues a video insisting he is committed to tackling the racism – but it is panned by Jewish leaders.

Corbynistas mount a social media campaign to get deputy Labour leader Tom Watson to quit after he criticises the party’s handling of anti-Semitism.

The Daily Mail exclusively publishes photos of Jeremy Corbyn holding a wreath at a ceremony where a terrorist linked to the Munich massacre was honoured.

The Labour leader insists he was there to honour others killed – but faces fresh calls to quit over the scandal.