A VIOLENT jogger elbowed a commuter in the face and broke his nose while he was running through the City of London, police said.

The runner struck the commuter, who was walking with two other pedestrians, outside the Royal Bank of Scotland at about 9pm on October 18. 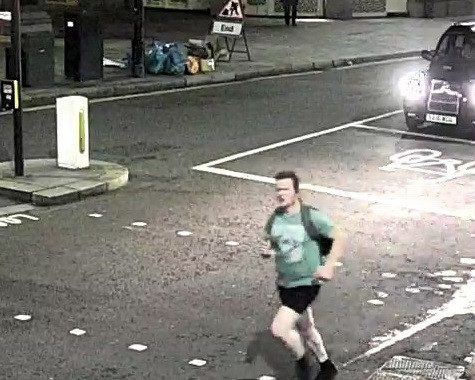 The male jogger ran through the middle of the group on Threadneedle Street in the heart of London’s financial district and swung out his elbow, breaking the man’s nose.

City of London police are keen to identify a man captured on CCTV in the area in connection with the “unnecessarily violent” assault.

The force is now appealing for help or information in identifying the jogger.

City of London Police Constable Claire Geldart said: “Today we have released an image of a man we would like to speak to in connection with this unnecessarily violent incident, which has left a blameless pedestrian with a serious and painful injury.

“If anyone is able to identify this man, we would ask that they contact police as soon as possible.”

Anyone with information should contact City of London Police by calling 101 and quoting reference 19*558006 or contact the independent charity Crimestoppers anonymously via the website or by calling 0800 555 111.

It's not the first time a jogger has been sought by police in connection with a violent crime.

A jogger dubbed the "Putney Pusher" was seen pushing a woman off a pavement on Putney Bridge directly into the path of an oncoming bus in May 2017.

The 33-year-old female victim survived thanks to the fast reaction of hero bus driver Olivier Salbris, who swerved the No 430 to miss the woman as she fell backwards into the road.

However, following a public appeal and officers trawling hours of CCTV, cops were unable to identify the jogger and called off their hunt.