Voting in the election to replace President Joseph Kabila, who is due to step down next month after 18 years in power, continued into the evening in some Kinshasa neighborhoods where polling had opened hours late due to an absence of voter rolls.

In other areas, election officials began counting ballots by torchlight, keeping count on classroom chalkboards. The first partial results are expected within the next two days.

While voting was mostly peaceful across Democratic Republic of Congo, there were incidents of violence.

At a polling station in South Kivu province in eastern Congo, a police officer shot dead a young man after a dispute over alleged voting fraud. The surrounding crowd then beat the officer to death, a witness and a local politician said.

An election official was also killed in the altercation, the electoral commission (CENI) said later.

Elections are a rare event in Congo, which has been plagued by authoritarian rule, assassinations, coups and civil wars since independence from Belgium in 1960.

If Kabila, in power since his father’s assassination in 2001, steps down after the vote it will be the country’s first democratic transition.

However, any disputed outcome could lead to a security breakdown, particularly along Congo’s borders with Rwanda, Uganda and Burundi, where dozens of armed militia are active.

Kabila voted early in the morning in Kinshasa at the same school as the candidate he is backing, former interior minister Emmanuel Ramazani Shadary, whom the latest opinion polls showed trailing two opposition candidates.

“It’s clear that the elections are free and fair, and will definitely be free and fair,” Kabila told reporters. He said his only concern was that the heavy rains might depress turnout.

But many Congolese were unable to cast ballots. At three opposition strongholds, in the east and west of the country, there was no voting at all after authorities canceled the poll, citing health risks from an Ebola outbreak and ethnic unrest.

The Catholic bishops conference (CENCO) said electronic voting machines, criticized by the opposition as vulnerable to fraud, had malfunctioned in at least 544 of 12,300 polling places it monitored around the country.

Congo is about 40 percent Catholic and Pope Francis offered prayers for the country in a weekly address at the Vatican. “I hope everyone works to maintain a peaceful climate that allows regular and peaceful elections,” he said.

Some voters complained they could not find their names on the rolls, and flooded streets in Kinshasa prevented others from reaching their polling stations.

“There is a big mess and we are asking ourselves if this is not an organized chaos to ensure that tomorrow the constitutional court cancels everything,” said Felix Tshisekedi, one of the main opposition candidates, suggesting Kabila could cling on to power in the event of an annulled election.

His campaign director, Vital Kamerhe, said that in the western city of Inongo, the head of a polling station was found voting several times for Shadary and three machines there were converting votes for Tshisekedi into votes for Shadary. 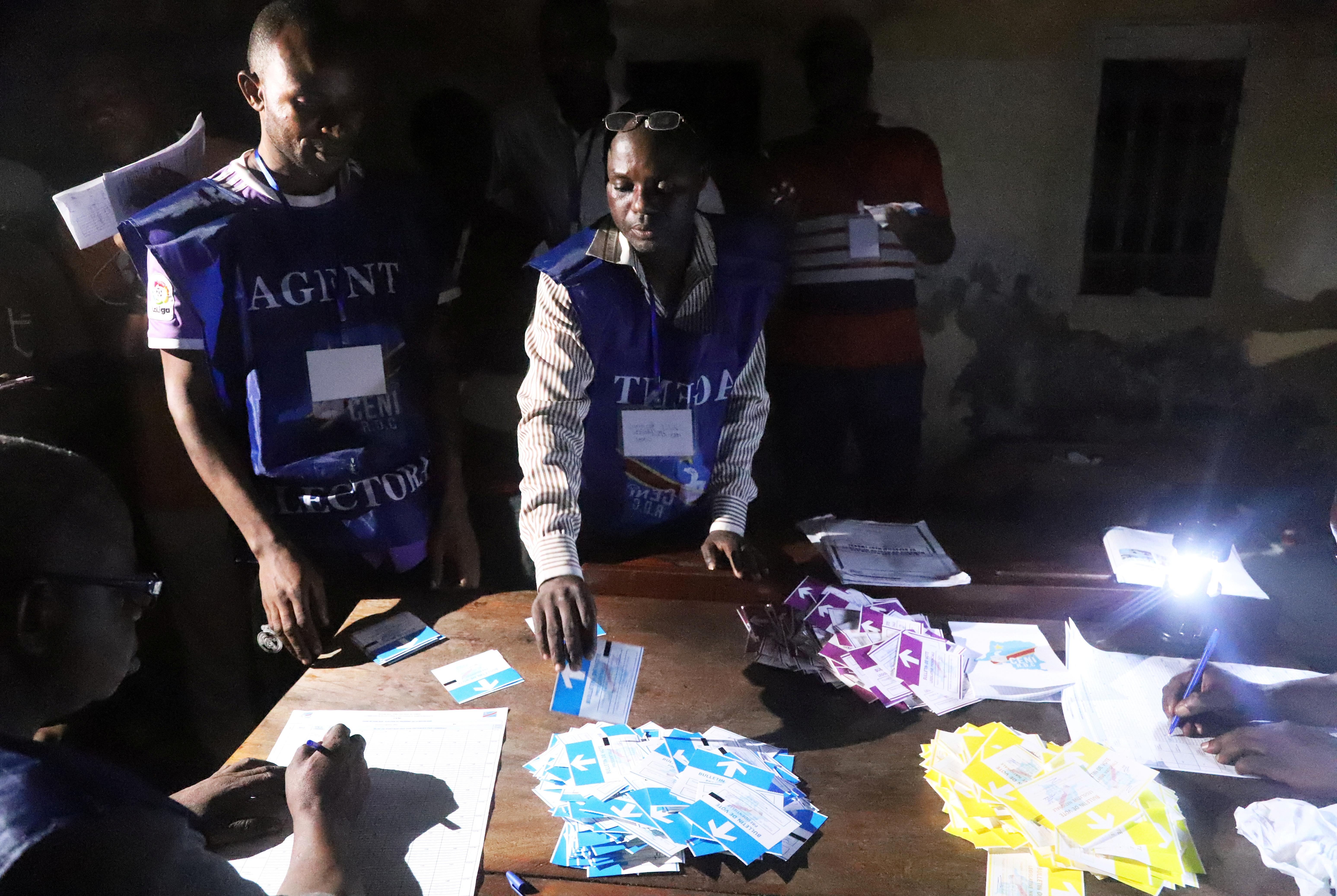 Martin Fayulu, the other main opposition candidate, complained at a news conference that electoral lists were posted late, names were misprinted and machines did not work.

“All these irregularities will for sure have a negative impact on the process led today by the CENI,” he said.

Reuters could not independently confirm allegations of fraud, and CENI president Corneille Nangaa said on state television the day had gone smoothly, aside from some minor difficulties.

Earlier, the CENI had said in a tweet that in Inongo and several other cities, “voting operations are under way and everything is going well”.

The chaos around the much-delayed vote has raised fears of a repeat of the violence that followed elections in 2006 and 2011.

Kabila’s agreement to stick to constitutional term limits should represent progress for the mineral-rich country. But he could continue to exercise influence from the sidelines and has not ruled out running again for president in 2023.

Violent protests erupted last week after authorities announced that voting had been canceled in the Ebola-hit eastern cities of Beni and Butembo, their surrounding areas and the western city of Yumbi, which account for more than 1.2 million out of 40 million Congolese voters.

Congo has seen strong economic growth from surging copper and cobalt output under his rule – but only meager improvements to the quality of life of ordinary people. 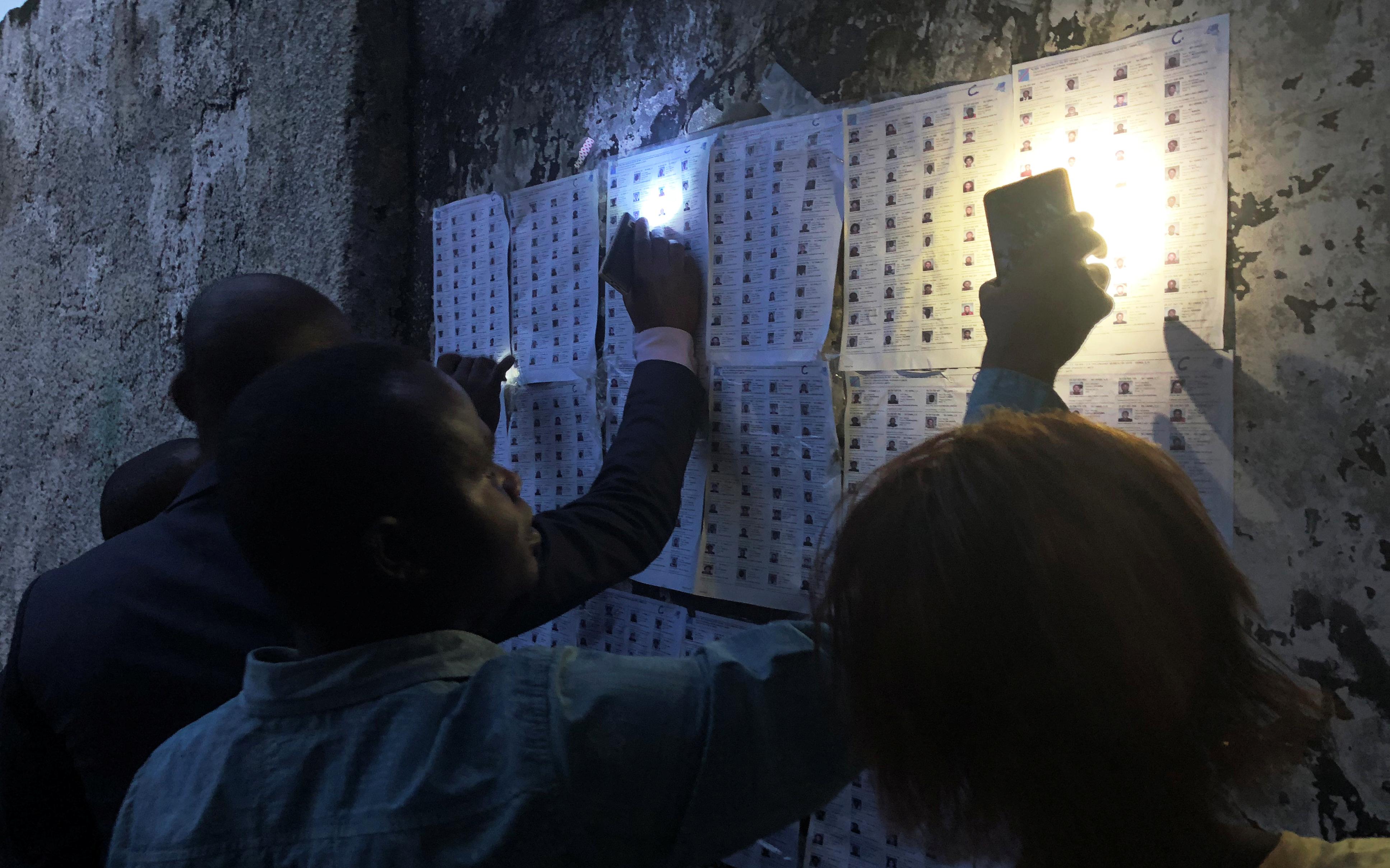 Tshisekedi trailed in the poll with 24 percent, while Shadary got 19 percent.

“I will vote for Martin Fayulu,” said Mama Wivine, 40 and unemployed, as she waited for the machine to arrive at her polling place in Kinshasa’s Camp Luka neighborhood. “We hope he can bring jobs and better conditions for us Congolese.”

“I think victory is on my side and that tonight I will be president,” Shadary said after casting his ballot.