Conservationists and wildlife carers have called on the Andrews government to undertake a more forensic assessment of the damage from last month’s wild storm in the Dandenongs, which left dozens of animals injured and displaced.

A month after the storm uprooted thousands of trees and left entire communities without power and heating for weeks, local volunteer groups are concerned the area’s fauna and flora has been forgotten. 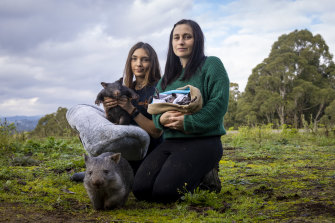 Selby wildlife volunteer Nicola Rae said she had seen a “huge” increase in the number of wildlife coming into the foster care network as a result of the storm; wombats whose burrows had flooded by rising creeks, possums displaced from fallen trees and kangaroos and wallabies wandering into traffic after their habitat was disturbed.

“Most are orphans, their parents have died, often hit by cars. All the animals were on the move after the storm and came out onto roads,” she said.

Sadly, Ms Rae said most of the animals that came in had to be euthanaised– particularly brush-tailed possums which had been attacked by dogs or cats while vulnerable on the ground.

“This was supposed to be the quiet time of year – you might have one or two animals coming through,” she said. “I’ve got about 20 at the moment.” 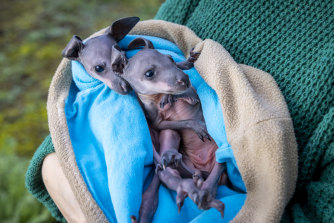 Orphaned twin swamp wallaby joeys rescued in the Dandenongs after their mother was hit by a car following the storm.Credit:Wayne Taylor

Nell Pedzik, a wildlife carer in Monbulk, has been busy with post-storm rescues. She said she was concerned about the area’s rare species found hurt or homeless.

“I had an eastern pygmy possum come into care after the storms and in 10 years of caring, I’ve never had one of those,” she said.

“[The possum] was found on the ground curled up next to her tree hollow that had fallen with her tree. She was scared and lost and vulnerable to predation and she should be hibernating this time of year as well.”

“I’ve got platypus down on my property as well and the dam that they’re in, flooded. We’re not actually sure whether their den has been flooded or whether they’re okay,” she said. “I haven’t seen them since the morning of the storm.”

Zoos Victoria confirmed it had treated a number of storm-affected wildlife at its Australian Wildlife Health Centre in Healesville.

Mount Dandenong local Donalea Patman, a founding director of national charity For the Love of Wildlife, has started a Go Fund Me fundraising page for local wildlife volunteers who had to deal with outages to their power, heating and water while rescuing animals. The money raised will be used to help build enclosures and pay vet bills, she said. She has already arranged a quad bike and a generator for affected shelters.

“As everybody’s aware, we’re in an extinction crisis,” Ms Patman said. “So there’s a lot of species up here that we know need all the help they can get.”

A government spokeswoman said it had deployed “rapid risk assessment teams” across the state after the storms and floods to assess the impacts on biodiversity and wildlife.

“These assessments showed that while wildlife has been displaced by the storms in the Dandenongs, no additional response from the department is required at this stage,” she said.

But president of the Southern Dandenongs Landcare group Rob Pergl said his group wanted comprehensive follow-up ecological assessments to determine specifics; such as how many trees with hollows should be kept for wildlife habitat.

His group is particularly concerned about the masses of fallen trees which have opened up parts of the forest to direct sunlight. This could dramatically change conditions for protected plants and animals and create favourable conditions for invasive weed species, which are already a problem, he said.

“These environments up here have been radically transformed in a very short period of time. We’ve lost in some parts the complete canopy and scrub layer structure,” he said. 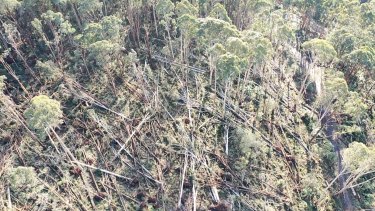 Damage at Mathias track in the Dandenong Ranges National Park after the June 9 storm.Credit:Rob Pergl

The group wrote to the Deputy Premier and local MP for Monbulk James Merlino two weeks ago asking for a meeting to discuss their concerns – particularly for vegetation listed under the state’s flora and fauna guarantee act.

“We’d like open communication and dialogue from land management agencies,” Mr Pergl said. “It requires a fair bit of thought into the approach as to how it’s going to be worked on.”