For every three international students in Australia, one job is created. Federal Education Minister Dan Tehan says so. And the loss of international student revenue could cut university researcher numbers by more than 10 per cent, according to education specialists at the University of Melbourne. 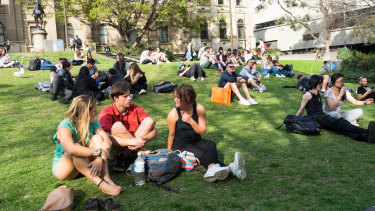 Students on the lawn (pre-lockdown) in front of Melbourne’s State Library.Credit:Alamy

Not doubt about it, international students are big business. In 2017 they were our third-largest export, earning the country $32.4 billion.

But I just miss them. I miss the weeknight throngs on Swanston Street, which has reverted to looking as utterly abandoned it did in my own student days in the late 1980s. If I see the students at all these days, it’s likely to be in a queue for food relief (one was reported to be a kilometre long), or zooming past on an electric bicycle with a Hungry Panda sack on their back, trying to earn the rent.

When the pandemic hit, international students were the first to disappear from the classes I was teaching at Melbourne. A couple didn’t even get here; others went home to their families, despite the risks. Some struggled with the isolation, and the challenges of screen-based learning were amplified for those whose first language wasn’t English. 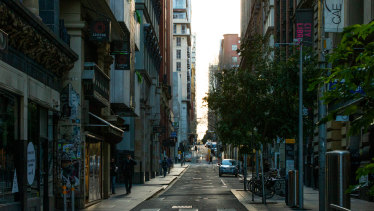 A lot of the students are still here, of course, perhaps 80 per cent of them. They were unable or afraid to go home, or worried they might not be allowed back. But next year’s cohort is in extreme doubt, despite the frantic efforts of universities and states. Even if they can come, there’s growing doubt they’ll want to.

And how could you blame them?

The national debate is all about how we can get the money flowing again. Some universities clear $23,000 per student above the cost of teaching them.

What we’re not hearing much about is the cultural loss or the moral issues.

Food banks and welfare funds set up by universities, councils, charities and states have been the extent of the help we’ve given. Back in April, Scott Morrison told the students: “If you are a visitor in this country, it is time … to make your way home.”

Quite an own goal, in marketing terms. At a forum on international education last week, the CEO of Western Australian’s Study Perth, Phil Payne, called the comments “damaging”. Catriona Jackson, chief executive of Universities Australia, said Morrison’s words were “unfortunate”.

The student cohort is broad – more than 100 countries’ worth – but it has a network. Students talk to each other, and they decide where to study based on more than university rankings. CISA’s national secretary, Varsha Devi Balakrishnan, said Morrison’s comments were “still something that comes up” among students.

In short, they feel rejected. And what about our own young people? Isn’t it good for them to study alongside their global peers?

Melbourne’s lord mayor, Sally Capp, points out that it’s not just universities that get student dollars: Committee for Melbourne figures show they contribute more than $5 billion a year to Victoria’s economy. But the 80,000 students in Melbourne, many of whom are now stranded, are also our guests, Capp said. “People say to me, ‘oh their families should be looking after them’. We are their family.”

Universities are desperate to get the students back. I hope they do, safely. And I hope that once they’re here, we see them for what they’re really worth: not as walking dollar signs, but as bright young minds here to contribute to the Australian project.

Jenny Sinclair is a Melbourne writer.