Footage has emerged showing Saudi Crown Prince Mohammed bin Salman being ignored by world leaders as they gathered for a photo at G20.

Video shows the royal fiddling with his clothes and standing awkwardly on his own at the back of the stage at the summit in Buenos Aires, Argentina, as others mingled.

At one point the 33-year-old, who has been accused of ordering the killing of Saudi journalist Jamal Khashoggi, looks around for someone to talk to.

The clip then shows him looking at the ground with other leaders apparently ignoring opportunities to speak to him during the traditional G20 ‘family portrait’ photograph. 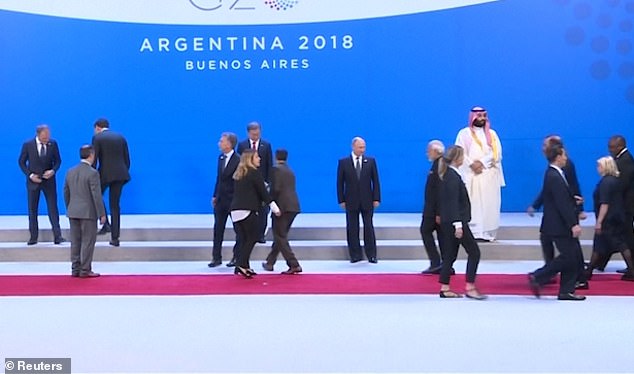 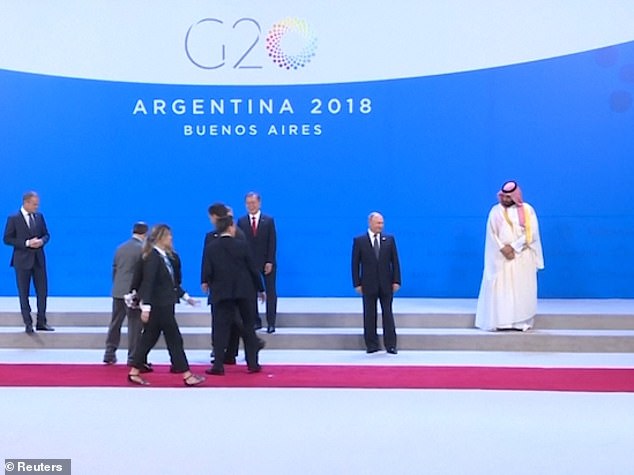 The clip shows the royal fiddling with his clothes and standing awkwardly on his own at the back of the stage at the summit in Buenos Aires, Argentina, as others mingled

It comes amid international condemnation over the murder of writer Khashoggi, who was lured to the kingdom’s consulate in Istanbul before being butchered by a Saudi hit squad. Saudi Arabia has said the prince had no prior knowledge of the murder.

Turkish President Tayyip Erdogan has said the killing was ordered by the highest level of Saudi leadership but probably not King Salman, putting the spotlight instead on the crown prince.

At the G20 over the weekend, Erdogan could be seen walking past the kingdom’s de facto ruler without acknowledging him.

The Saudi government media office, in a statement responding to an earlier Reuters story about Prince Mohammed being sidelined in the photo, said he was standing ‘in the same proximity to the centre of the group’ as in a similar photo at the G20 summit in China two years ago. 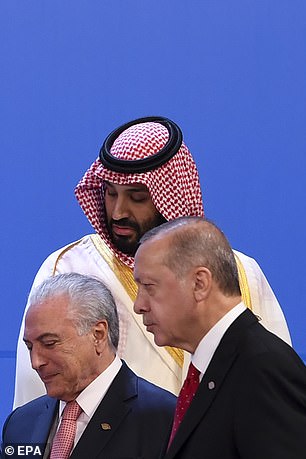 Earlier in the summit, Russian President Vladimir Putin was seen high-fiving the prince and heartily shaking his hand.

The contrasting moments captured the dilemma facing world leaders at the event: How to deal with the crown prince, who is dogged by controversy over Khashoggi but is also de facto leader of a rich, oil-producing kingdom that is a major global investor.

At least 12 leaders went on to have closed-door bilateral meetings with him during the two-day summit.

Three of them, Canadian Prime Minister Justin Trudeau, British Prime Minister Theresa May and French President Emmanuel Macron, said publicly they had pressed Prince Mohammed for a full investigation into the murder.

Trudeau said he had a frank conversation with the prince at a leaders’ dinner on Friday, telling him there was ‘a need for better answers on the killing of Khashoggi.’ May said she called for a full, credible and transparent investigation, while Macron insisted the crown prince allow international investigators to take part in any inquiry.

The crown prince also discussed investments and economic partnerships with Indian Prime Minister Narendra Modi and Chinese President Xi Jinping. Readouts of those meetings did not say whether Xi and Modi had confronted the prince over the Khashoggi case. 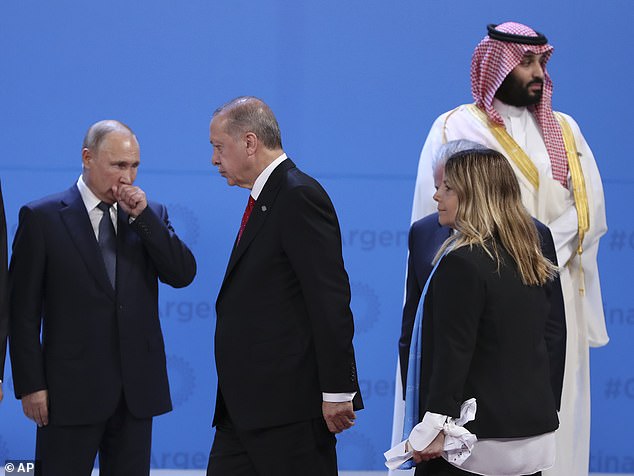 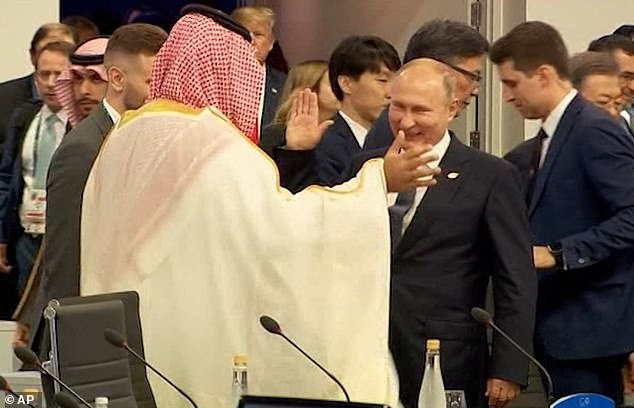 ‘China firmly supports Saudi Arabia in its drive for economic diversification and social reform, and will continue to stick together with Saudi Arabia on issues involving their core interests,’ Xi said, according to China’s official Xinhua news agency.

Modi and Prince Mohammed discussed scaling up investments in Indiaâs tech, farm and energy sectors, according to an Indian official and the Saudi news agency (SPA).

Before the start of the gathering, Argentinian President Mauricio Macri had said it was possible that the accusations against the crown prince could be discussed when the leaders convened.

In the end, they were not.

Days before the summit, Human Rights Watch called on Argentina to use a war crimes clause in its constitution to investigate any involvement by the crown prince in possible crimes against humanity in Yemen, where a Saudi-led military campaign is under way, and Khashoggi’s murder.

The federal prosecutor’s office assigned to review the case had not announced whether a formal investigation would be opened by the close of the summit on Saturday.