By Richard Lough and Elizabeth Pineau

PARIS (Reuters) – Rioters in Paris torched motorbikes and set barricades ablaze on the upmarket Boulevard Saint Germain on Saturday, as protests against high living costs and the perceived indifference of President Emmanuel Macron turned violent on the fringes.

The latest “yellow vest” marches began peacefully but degenerated in the afternoon as protesters threw missiles at riot police blocking bridges over the Seine.

Officers fired tear gas to prevent protesters crossing the river and reaching the National Assembly. One riverboat restaurant was set ablaze and a policeman was wounded when he was hit by a bicycle hurled from a street above the river bank.

Two months after they started blocking roads, occupying highway tollbooths and staging sometimes-violent street protests in Paris, the yellow vests wanted to inject new momentum into a movement that weakened over the holidays.

Macron’s government, shaken by the unrest, had this week hardened its stance, branding the protesters agitators seeking to overthrow the government.

Driving the unrest is anger, particularly among low-paid workers, over a squeeze on household incomes, and a belief that Macron is deaf to citizens’ needs as he enacts reforms seen as favoring the wealthy.

“They have no right to leave us in the shit like this,” said protester Francois Cordier. “We’re fed up with having to pay out the whole time, we’ve had enough of this slavery, we should be able to live on our salaries.”

Government spokesman Benjamin Griveaux escaped from his office through a back door after a small number of protesters broke into the compound and smashed up vehicles.

The turnout was higher than last week but a small fraction of the numbers seen in the first weeks of the protests. 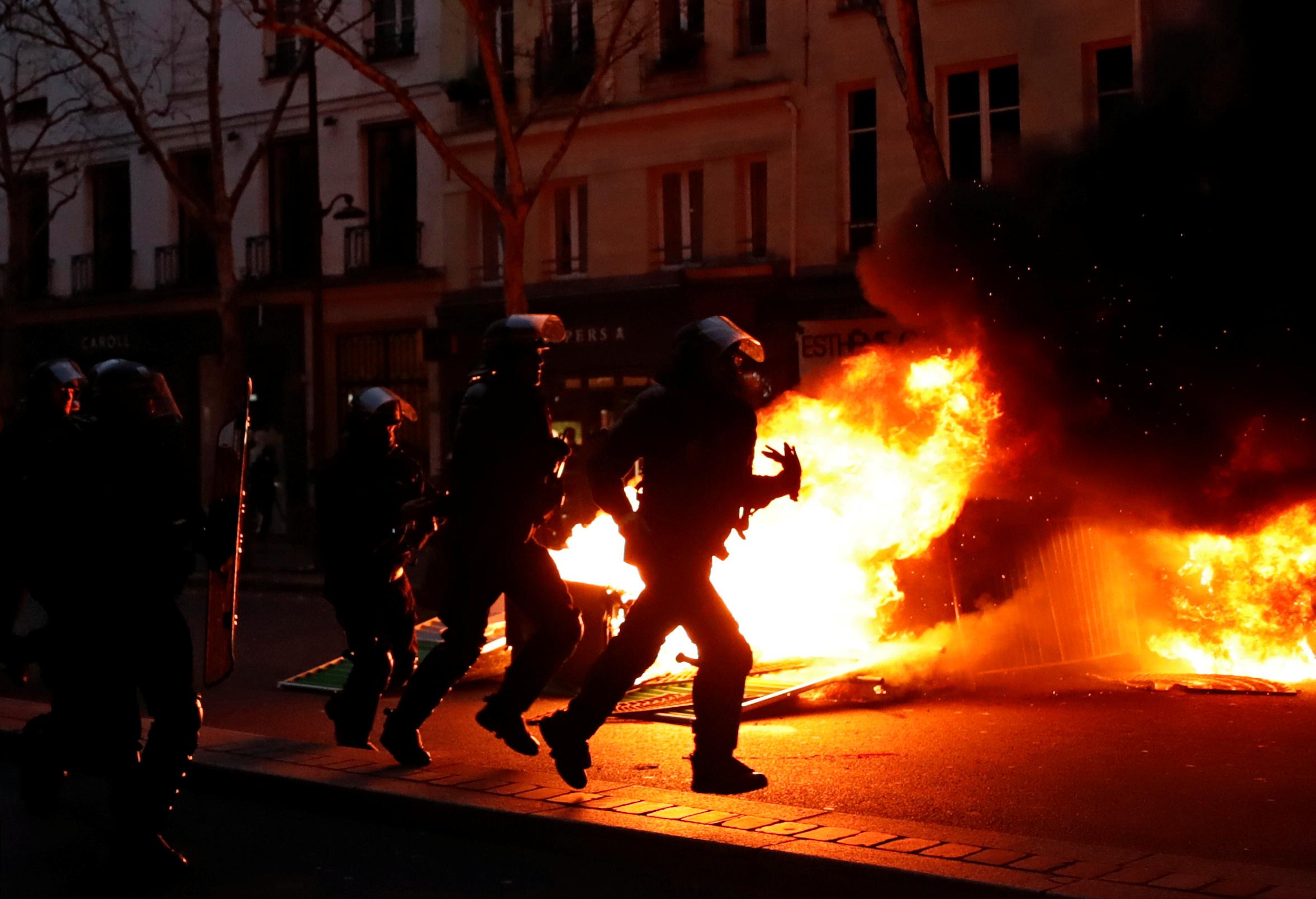 “POWER TO THE PEOPLE”

As darkness fell, officers dispersed scores of yellow vests gathered on Paris’s Avenue des Champs-Elysees. Television images showed hooded youths setting a car alight on a side street, but there was no repeat of the scenes in November when shops were looted, banks vandalized and the Arc de Triomphe was defaced.

Authorities have blamed the worst of the violence in recent weeks on anarchists, anti-capitalists and extreme groups on the fringes of the yellow vest movement.

The protests come 18 months into Macron’s tenure and his drive to reshape the economy, and have already forced him into concessions.

Last month, Macron promised tax cuts for pensioners, wage rises for the poorest workers and the scrapping of planned fuel tax increases, at a cost to the Treasury of 10 billion euros ($11 billion).

It was the first big U-turn for a president elected 18 months earlier on a platform to break with traditional French politics and liberalize the heavily regulated economy. 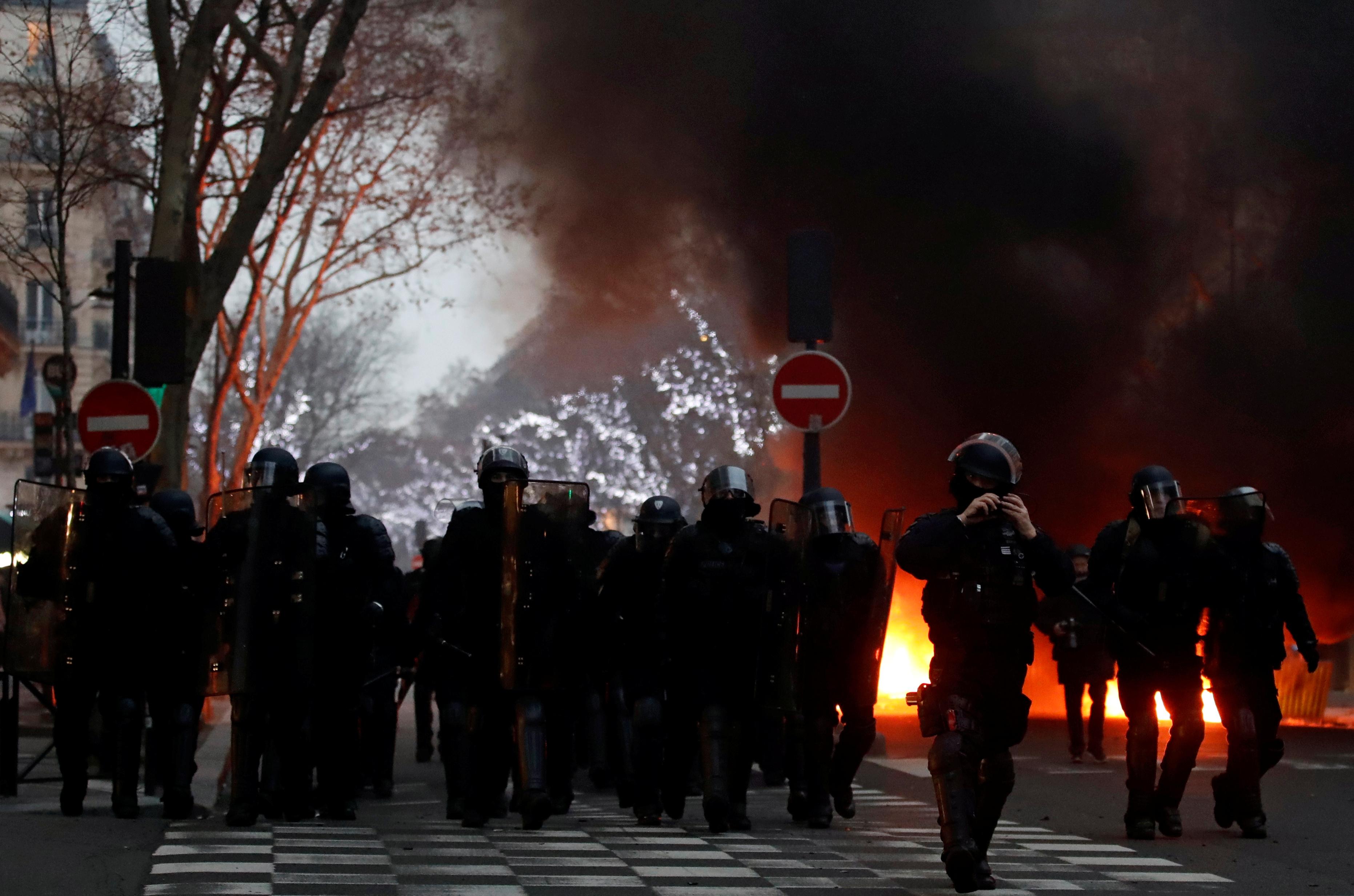 Faced with record low popularity ratings, Macron is expected soon to set out his plans for the coming months. These include a nationwide debate on ecological, fiscal and institutional questions, the results of which he says will feed into policy.