The City of Melbourne will increase rates by 1.75 per cent after incurring a deficit for the third year in the row, as it attempts to tackle slower than expected economic recovery from the coronavirus pandemic.

The council on Tuesday delivered a high-spending draft budget for 2022-23 of $837 million, recording a deficit of $11.3 million.

It will spend $33.6 million on graffiti removal, $26.5 million for parks and gardens and $17.5 million in the next year to secure new open space across the city with a primary focus on Southbank, the city’s most densely populated suburb. 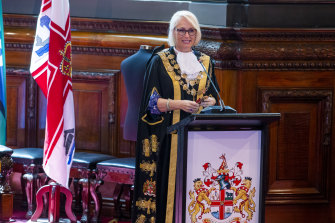 Lord Mayor Sally Capp at her swearing in ceremony. She delivered the council’s draft 2022/2023 budget on Tuesday. Credit:Wayne Taylor

In 2020, the council froze rates and last year it applied a 1.5 per cent discount to help ease pressure on ratepayers – but this year it will increase rates by 1.75 per cent.

The draft budget stated the deficit was mostly due to slower than expected economic recovery from COVID-19, the impacts of Omicron and the sixth lockdown in 2021-22.

The draft budget shows an increase of $46.6 million in revenue from fees and charges compared with last year, which the council said was mainly due to an expected increase in CBD activity and visitation as revenue recovered to post COVID levels.

The budget increases child care fees from $134 a day to $137.50, however the council said the majority of fees charged had not increased.

The City of Melbourne’s overall expenses will increase by $36.7 million, up 7.2 per cent, mainly a result of an increase in staff and employee costs. It will increase council staff numbers from 1,382 to 1,480.

“This is a landmark budget that restores city confidence and continues to invest in Melbourne’s momentum,” she said. “We’re investing to grow our economy beyond pre-pandemic levels and create more jobs, more events and more amenities for our residents, traders and visitors.”

Finance portfolio lead councillor Philip Le Liu said the draft budget put the council in a strong position to deliver a surplus in 2023-24.

“Years of disciplined financial management made it possible to increase investment to support our community as the pandemic steered our city off track over a difficult two years,” he said.