Cocky criminal linked to ‘Gun No. 6’ pistol used in nine shootings and three murders across the West Midlands describes being shot as ‘just another day at the office’

From now on, I want DCI Andy Hough to narrate all true crime documentaries.

The veteran West Midlands detective leaned into the camera on Gun No 6 (BBC2) as if he were presenting a blood-soaked Jackanory.

At first, as he fixed us with a storyteller’s gaze and revealed that every night he dreamed of murder, I assumed this was an actor, playing a copper.

He spoke fluently, precisely, never stumbling over words, with a hint of theatrical relish. 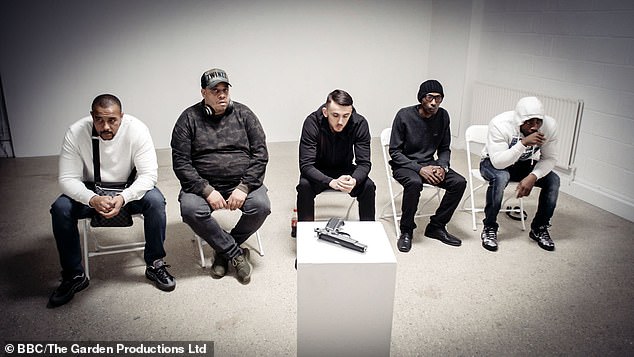 DCI Andy Hough leaned into the camera on Gun No 6 as if he were presenting a blood-soaked Jackanory (Pictured, former offenders Dean Laycock, Daryl Laycock, Sammy Geldard, Leroy Smith and David Sien)

As the Mail reported on Saturday, the Chief Inspector introduced a grim account, mapping the trail of misery and crime left by one handgun passed around the members of a Birmingham drugs gang.

Police still haven’t been able to seize the weapon. It is known simply by its casefile number — Gun No 6.

None of the extras in the reconstructions was an actor either. Instead, reformed gangsters and armed robbers played out the shootings, and talked about their own experiences in a former life of crime.

They certainly looked authentic, right down to the swagger in their walk and the callousness in their faces when the trigger was pulled.

But this one-off film came uncomfortably close to providing a platform where they could brag about their exploits.

Mancunian Daryl, who had survived three shootings and always refused to co-operate with police hunting his assailants, called his arrest for attempted murder ‘just another day at the office’. 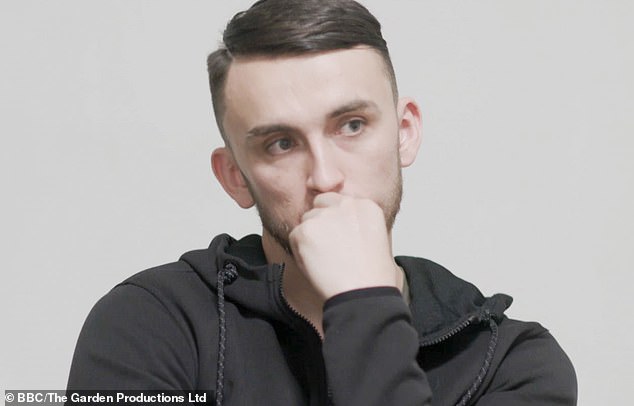 The Chief Inspector introduced a grim account, mapping the trail of misery and crime left by one handgun passed around the members of a Birmingham drugs gang

He cockily described being attacked while out with a girl on a first date. He suffered 20 bullet wounds after throwing himself over her.

She was hit in the chest and hand … and didn’t ask for a second date. Grinning, Daryl said that had surprised him because ‘I’m a good-looking lad’.

It’s a smart line. But I can’t help feeling that thousands of hard cases and petty crooks would be glad to commit murder if they thought the BBC might give them five minutes of uninterrupted boasting.

In a TV culture where people will risk injury and embrace humiliation for the sake of appearing on shows such as I’m A Celebrity … Get Me Out Of Here, it is dangerous to reward violent criminals with screen time.

In their eagerness to make Gun No 6 stand out from other documentaries, the producers don’t seem to have given a moment’s thought to this.

Slow start of the weekend: The Sinner (BBC4) with Jessica Biel was banal and dull for the first 15 minutes.

But if you stuck with it, the story took an explosive twist.

No spoilers … but imagine the Beach Boys starring in Hitchcock’s Psycho.

Dynasties (BBC1) was neck-deep in violence, too — quite literally, as the lionesses feeding on a buffalo carcass dripped in gore from their whiskers to their shoulders. This was nature red in tooth, claw, fur and giblets.

This episode should have carried a warning for anxious vegetarians: ‘Viewers might want to watch something less bloody, such as a Quentin Tarantino movie.’ 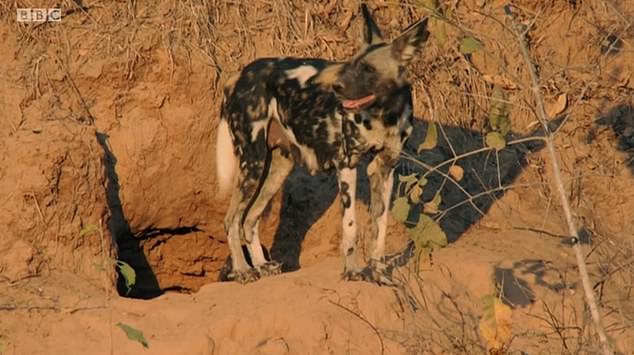 The stand-out image might be an aerial view of the dog pack running in late afternoon — their slender bodies all but invisible from the air, but their shadows galloping over the ground like dark ghosts.

Other moments were glorious too: zebras shimmering like an optical illusion in the 50c (122f) heat; pink lightning stabbing from thunder clouds over the Zambesi river; insects flickering around a lioness’s muzzle in the golden sunset like a cloud of fireflies; a heron that seemed for all the world to be surfing as it rode on the back of a submerged hippo.

It was all simply beautiful… until the next bout of visceral slaughter.