A senior Member of the European Parliament, German Reinhard Buetikofer, angrily hit back saying that using the holocaust as a “diplomatic football” was a reckless new low in China’s wolf-warrior diplomacy.

Britain, Canada and the European Union imposed sanctions against Chinese officials in March over what the United States says is genocide perpetrated against Uighur Muslims in Xinjiang. 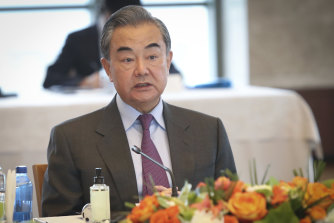 China’s Foreign Minister Wang Yi, pictured in March in Ankara, said the sanctions made Chinese people think of when they were bullied by European imperialists in the past. Credit:Turkish Foreign Ministry.

China immediately retaliated by imposing sanctions on several British MPs and members of the European Parliament who belong to the Inter-Parliamentary Alliance on China.

The counter-sanctions were received badly in Europe, which was on the cusp of ratifying an EU-China investment deal but hit the freeze button instead.

When challenged during a webinar for the German-based Munich Security Conference, Wang said the sanctions hurt China’s national dignity.

“How is that possible for comprehensive, strategic partners to put sanctions on each other? The Chinese side was shocked when the EU made a decision to impose sanctions on us,” he said, according to an official translator.

“When those EU sanctions were launched, the Chinese people were reminded of the days when we were bullied by European imperialists. We have our national dignity to uphold.”

It is estimated that 1 million Uighurs have been detained in so-called re-education camps in Xinjiang. Wang rejected academic research detailing the abuses, including forced labour and forced sterilisations of women.

Uighur women who have been detained in the camps have detailed systemic rape, abuse and torture. China has refused to allow independent investigators into the camps and denies any abuses are taking place.

“There is no forced labour in China,” Wang said. “There’s no such thing of concentration camps in Xinjiang.”

“And there’s no such thing as genocide – our European friends know what is genocide,” he said, referring to the Holocaust when Nazi Germany murdered six million Jews during the second world war.

Buetikofer, who leads the European Parliament’s China delegation, was one of the politicians sanctioned.

He described as reckless Wang’s attempts to use the Holocaust to dismiss claims of crimes against humanity in Xinjiang.

“Wang Yi basically tells us ‘shut up, you shouldn’t talk’.

“The Holocaust should not be used as a diplomatic football for rhetorical gains,” he told The Sydney Morning Herald and The Age.

“The fact of the matter is that it has been precisely because of our wretched history that we have built our democracies and European Union on the basis of adherence to human rights and the rule of law. For us it is an historic obligation.

“If this People’s Republic of China had nothing to hide, they would open up and allow a full independent investigation; no amount of aggressive wolf warrior diplomacy will obscure the fact that they still have not done so,” he said.