Beijing: Tang Haiyan runs his school with a clear mission in mind: He will train boys to be men.

There are many ways to be a man, of course, but the broad-shouldered Tang has a particular kind of man in mind. This man plays sports. This man conquers challenges.

"We will teach the children to play golf, go sailing and be equestrians," said Tang, 39, "but we will never cultivate sissies." 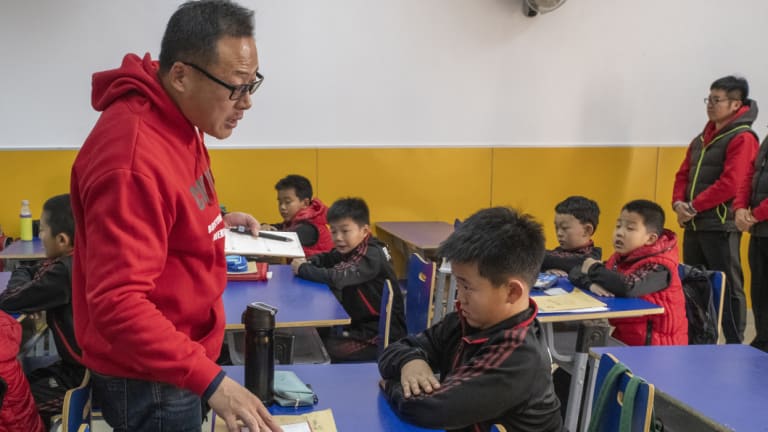 Tang Haiyan, founder of the Real Boys Club, lectures a student. “We will never cultivate sissies,” he says.Credit:New York Times

Tang founded the Real Boys Club, which stands at the forefront of a deep conversation in China about what it means to be a man. It is a debate that has been stirred by worries about military effectiveness, an embrace of traditional culture and roles, disappointing academic performance among boys and echoes of the defunct one-child policy.

To the club's thinking, the alternative for the boys, ages seven to 12, is life in a society where androgynous pop idols, overprotective mothers and mostly female teachers would turn them into effeminate crybabies.

On one recent Sunday afternoon, 17 boys from the Real Boys Club blocked, sprinted and tackled one another as they learned about American football. Wearing a red-hooded sweatshirt, Tang led the boys in a call-and-response chant. 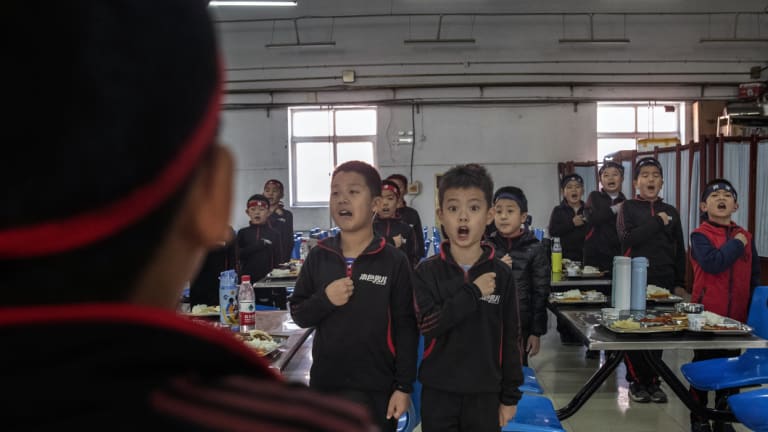 "I'm the best!" they shouted back.

Arguably, the club is intended to address a problem that China does not have. Chinese men still dominate the top echelons of politics and business. Institutional sexism is widespread. Wealth is concentrated in the hands of men. Women complain of sexual harassment within public transport, universities and companies.

"Erasing the gender characteristics of a man who is not afraid of death and hardship," said Peng Xiaohui, a sexology professor at Central China Normal University, is tantamount to "a country's suicide." 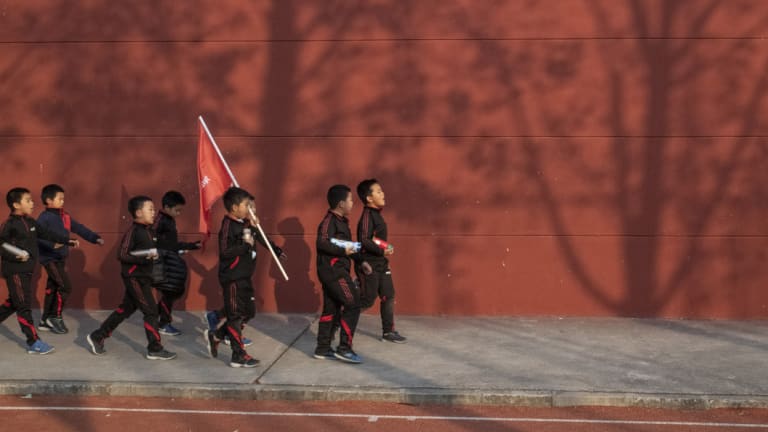 Backbone of the Chinese people: The Real Boys Club walk to their bus at the end of training.Credit:New York Times

Tang, a former football coach and teacher, said the idea for starting his club came from his discussions with parents who were worried about their sons falling behind in school. According to a 2014 survey of 20,000 Chinese primary school students and their parents in four provinces, almost two-thirds of the boys surveyed performed poorly academically, compared with less than one-third of girls. The study was conducted by the China Academy of Educational Sciences, a research institution affiliated with China's education ministry.

Tang was also inspired by a 2006 trip to Oakland, California, where he saw American parents teach their boys "to overcome challenges and dangers" through physical training. In China, by contrast, many parents try to protect their sons, a cultural bias that has been magnified by the one-child policy. The survey by the China Academy of Educational Sciences found that "whether it was in life or in school, parents had a tendency to spoil boys".

More than 2000 boys have enrolled in the Real Boys Club, according to Tang. 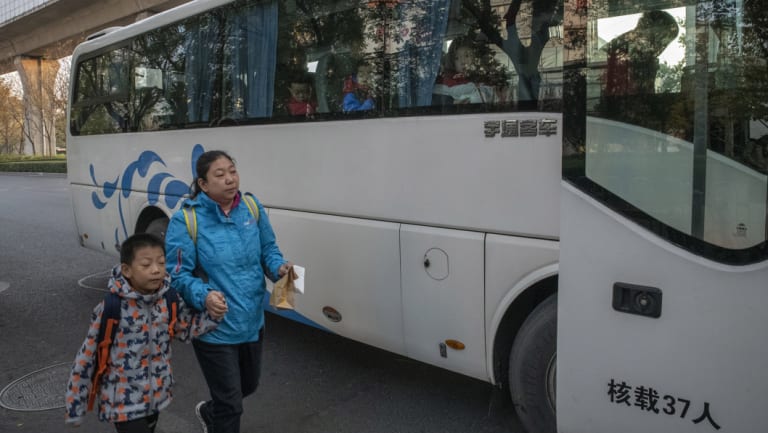 A mother brings her son to the Real Boys Club bus that will take enrolled boys to the sports school in Beijing.Credit:New York Times

One mother, Sun Yi, decided to enroll her eight-year-old son – her only child – because she believed it would teach him teamwork. She paid about $US2000 for a semester's worth of classes.

"He used to like to cry, but now I think he has a much sunnier disposition," she said. "I feel his tolerance ability has improved, and he now knows how to deal with failure and frustration."

In the Real Boys Club, the lessons of manhood are taught in slogans. Before the boys do their homework, they pledge to study hard for the "rise of China", starting with the words: "I am a real man! The main bearer of the family and social responsibility in the future! The backbone of the Chinese people!"

Tang said "real men" are gallant. ("I can never ask this of a girl," said Tang, who has a three-year-old daughter. "This is a trait that is unique to boys.") Other traits that boys should have, he said, include courage, etiquette, the ability to distinguish right from wrong and an understanding of "honour and disgrace". 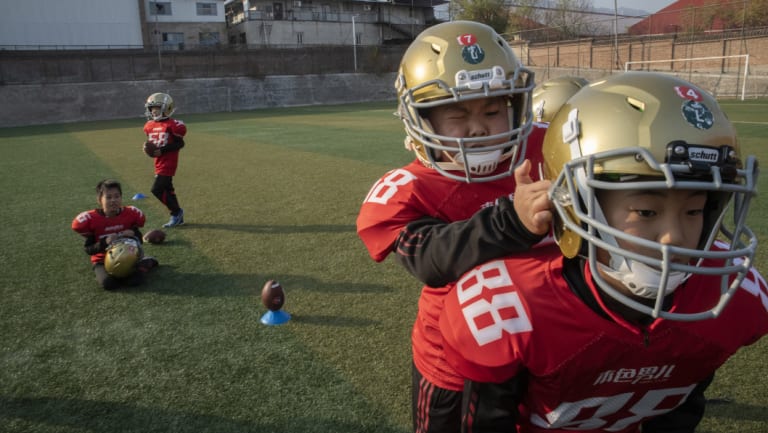 Students help each other put on gridiron helmets.Credit:New York Times

At the start of the program, several of the boys spoke only in a whisper or cried for half an hour, said Guo Suiyun, one of the teachers.

"When one of them cries, we will definitely not comfort him," said Guo, 30. "We will only encourage him to be strong."

Every Sunday, the boys hop on a bus at 7.40 am and ride to a sports school nestled in the hills of western Beijing, where they play soccer, games that involve teamwork and strength, and gridiron – a sport that is still new to many in China. One day in December, they will run shirtless.

"I never get to play soccer during the week," said Sun Shujie, 10. Earlier, Tang had asked him to share his story about giving up his smartphone during the week and how he restricted himself to only 20 minutes of use.

The boys do their homework in a school surrounded by framed posters of famous scientists and engineers. Only one woman is pictured: Polish physicist Marie Curie. 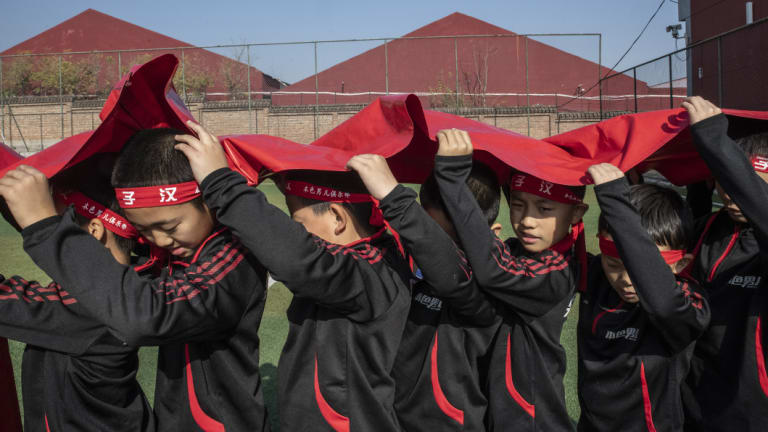 The boys take part in an exercise to teach them about collective effort.Credit:New York Times

Some in China blame boys' lacking behaviour on a lack of male role models. Fathers are rarely involved in their sons' upbringing, according to government research. Even pop culture figures have sparked complaints: A number of parents were outraged when China's state broadcaster, China Central Television, in September featured a boy band whose members wore makeup. The parents complained that these pop idols could cause their sons to "behave in a feminine way".

The Real Boys Club is meant to foster self-sufficiency, with the study period encouraging the boys to meet their goals without their parents hovering over them. Jin Hong, nine, said his parents would constantly breathe down his neck about schoolwork at home. "The thing I like most about the program is that I can study independently," he said.

But the program does not encourage the boys to run amok. Boys who commit infractions – pushing other boys, hurling vulgarities – get points deducted and can get demoted from the "phoenix" level to the "smelly egg" level. 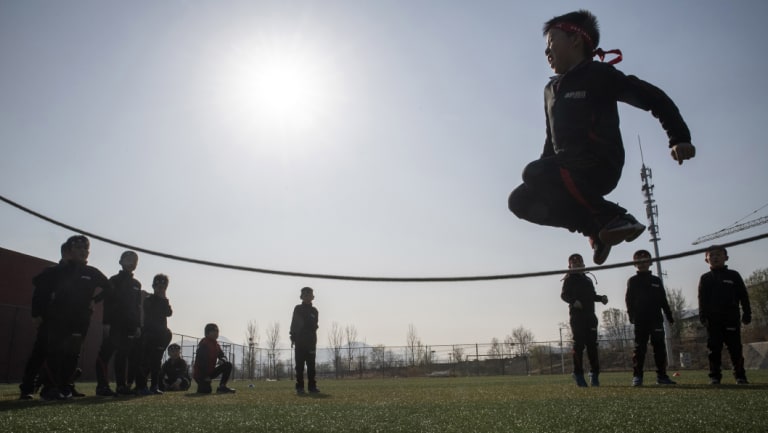 Tang said boys should have courage, etiquette, be able to tell right from wrong and understand “honour and disgrace”.Credit:New York Times

For Sun's son, Fang Dingyue, it got to be too much. After Tang singled him out for not keeping up while marching, Dingyue burst into tears.

Other men say they have doubts about the effectiveness of male-oriented schools. Wang Chenpeng, 23, a marketing employee for a storage company who loves wearing makeup, said his mother burned all his dolls because she thought it was too girly. He later came out as gay.

"On the surface, these children may try to keep in line with the requirements of their parents and these educational institutions, and then present a superficial image," he said. "But their essence will remain the same."