Washington: Chinese astronauts have blasted off and are on their way to become the first to set foot on Beijing’s rival to the International Space Station.

Three astronauts – or yuhangyuan – are aboard the Shenzhou-12 spaceship launched on the Long March-2F Y12 rocket from the Gobi desert. They are part of an ambitious mission to complete construction of the space station by 2022, forming the third of 11 expected trips.

China’s pursuit of an orbiting human outpost has been fuelled by a US ban on its astronauts visiting the International Space Station. Under US law, NASA cannot co-operate with China, meaning none of the 240 men and women of various nationalities who have been to the ISS was Chinese. 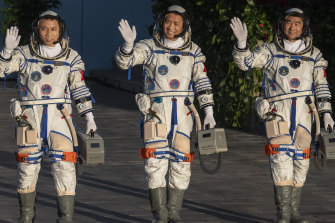 The ISS, which is a collaboration between the US, Russia, Canada, Europe and Japan, is due for retirement after 2024, although it could remain in use beyond 2028.

China’s new Tiangong space station, with a lifespan of up to 15 years, is expected to outlast it.

That means in the 2030s China may be the only operator of a space station.

Russia has increasingly been co-operating with China on space missions amid deteriorating political relations with the US. 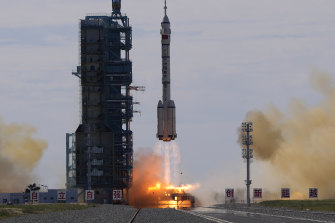 A Long March-2F Y12 rocket carrying a crew of Chinese astronauts in a Shenzhou-12 spaceship lifts off at the Jiuquan Satellite Launch Centre on June 17.Credit:AP

China and Russia are partnering on a mission, planned for 2024, to find ice on an asteroid. They are also working together on attempts to build a research base at the lunar south pole by the end of the decade.

Ji Qiming, assistant director of the China Manned Space Agency, said it was his country’s “unremitting dream” to become a powerful space nation.

But he said exploring the universe was the “shared cause of all mankind” and astronauts from other countries may be invited aboard the Tiangong, which translates as “Heavenly Palace”.

“We are willing to carry out international co-operation and exchanges with all countries and regions worldwide that are committed to the peaceful use of outer space.”

The three astronauts are Nie Haisheng, 56, Liu Boming, 54, and Tang Hongbo, 45. They will stay on board for three months, making it the longest manned Chinese space mission so far.

There they will have a choice of 120 different types of food, and “space treadmills” that counter the effects of weightlessness. Each astronaut will have his own living area and there will be a shared bathroom, dining area, and a communication centre for sending emails and making video calls.

Nie, a former air force pilot, is o his third trip. He is the oldest Chinese astronaut to go to space.

Speaking from behind glass, to keep the astronauts quarantined, he said: “The task is very arduous and there are many challenges. My colleagues and I will co-operate closely, operate carefully and overcome all difficulties.”

The space mission carries political weight for the Chinese Communist Party as it prepares to celebrate its centenary next month.