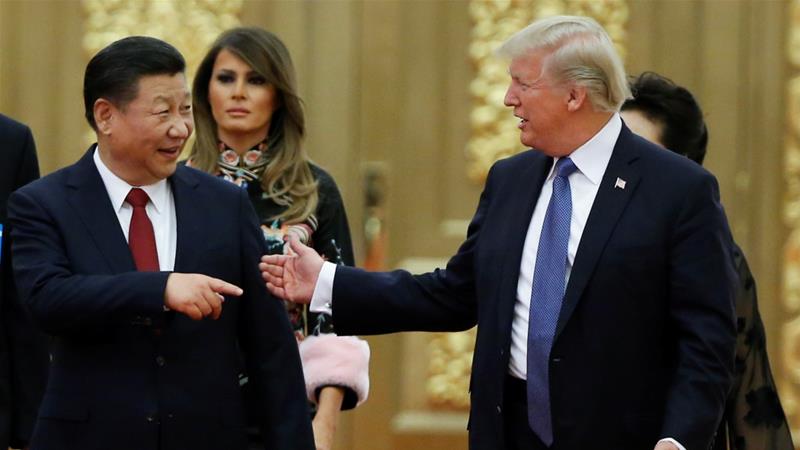 The Chinese government says it will push forward trade negotiations with the United States in the next 90 days, expressing “confidence” that an agreement can be reached even as concerns remain over whether the two sides can resolve their deep differences.

The announcement on Wednesday followed a period of relative quiet from Beijing after Chinese President Xi Jinping and his US counterpart, Donald Trump, reached a temporary truce in the trade war between the world’s two largest economies over the weekend.

The two leaders, who met on the sidelines of a Group of 20 summit in Argentina, also decided to hold off on new tariffs and give negotiators three months to strike an agreement.

In a brief statement, China’s commerce ministry described the two sides’ discussions as “successful”, adding it was “confident” of their agreement’s implementation.

“The economics and trade teams of both sides will actively push forward negotiations within 90 days in accordance with a clear timetable and road map,” it said, in the first public acknowledgement by the Chinese government of the 90-day timeline.

“China will start with the implementation of the specific matters in which consensus has been reached, the sooner the better,” it added, without providing more details.

This year, the Trump administration instigated a trade war on Beijing, imposing tariffs on a total of $250bn of Chinese imports. For its part, China has slapped tariffs on $110bn of US imports.

Last month, the Organisation for Economic Cooperation and Development (OECD), which advises many of the world’s richest economies, warned that the global economy had passed its peak and faced a slowdown driven partly by trade disputes.

The threat of further escalation in the US-China trade war has loomed large over financial markets and the global economy for much of 2018, and investors initially greeted the ceasefire with relief.

But the mood has quickly soured on scepticism that the two sides will be able to reach a substantive deal on a host of highly divisive issues within the tight negotiating window. Failure would raise the spectre of fresh US tariff moves and potential Chinese retaliation as early as March.

During the talks in Buenos Aires, Trump agreed to delay a scheduled escalation in US tariffs on many Chinese goods, from 10 percent to 25 percent, that had been set to take effect from January 1, 2019.

Instead, the two sides are to negotiate over US complaints about China’s trade practices, notably that it has used predatory tactics to try to achieve supremacy in technology. These practices, according to the administration and outside analysts, include stealing intellectual property and forcing companies to turn over technology to gain access to China’s market.

China has said comparatively little about the Trump-Xi agreement after senior Chinese officials briefed the media following the leaders’ meeting, and there have been some differences between the two sides’ accounts of what the deal entails.

The Reuters news agency reported quoting Chinese officials that they were “waiting for the leaders to return” before publicising details. Xi and most of his senior officials, including the commerce minister and the country’s two top diplomats, are in Portugal, and due to be back in China on Thursday.

For their part, Trump and White House officials have promoted the apparent US-China agreement in Buenos Aires as an historic breakthrough that would ease trade tensions and potentially reduce tariffs – even though Beijing has not confirmed that it made most of the concessions that the Trump administration has claimed.

According to the White House, China has agreed to buy a “very substantial” amount of agricultural, energy, industrial and other products from the US to reduce a yawning trade gap, as well as to negotiate over Washington’s assertions that Beijing steals American technology.

But by Tuesday morning, Trump was renewing his tariff threats in a series of tweets.

“President Xi and I want this deal to happen, and it probably will,” Trump wrote on Twitter. “But if not remember, I am a Tariff Man. When people or countries come in to raid the great wealth of our Nation, I want them to pay for the privilege of doing so.”

Trump added that a 90-day timetable for negotiators to reach a deeper agreement had begun and that his aides would see “whether or not a REAL deal with China is actually possible”.

He revisited the issue later on Tuesday, within minutes of the commerce ministry’s statement, writing on Twitter: “We are either going to have a REAL DEAL with China, or no deal at all – at which point we will be charging major Tariffs against Chinese product being shipped into the United States. Ultimately, I believe, we will be making a deal – either now or into the future. China does not want Tariffs!”

Trump’s words had the effect of making the already vague and uncertain weekend agreement seem even less likely to produce a long-lasting trade accord.

“We expect the relationship between the world’s two largest economies to remain contentious,” Moody’s Investors Service said in a report. “Narrow agreements and modest concessions in their ongoing trade dispute will not bridge the wide gulf in their respective economic, political and strategic interests.”

Among the conflicting assertions that White House officials made was over whether China had actually agreed to drop its 40 percent tariffs on US autos.

In addition, Treasury Secretary Steven Mnuchin said on Tuesday on the Fox Business Network that China agreed to buy $1.2 trillion of US products. But Mnuchin added, “If that’s real” – thereby raising some doubt – it would close the US trade deficit with China, and added: “We have to have a negotiated agreement and have this on paper.”

Many economists have expressed scepticism that much could be achieved to bridge the vast disagreements between the two countries in just 90 days.

“The actual amount of concrete progress made at this meeting appears to have been quite limited,” Alec Phillips and other economists at Goldman Sachs wrote in a research note.

Analysts also note that the two countries remain far apart on the sharpest areas of disagreement, which include Beijing’s subsidies for strategic Chinese industries, in addition to forced technology transfers and intellectual property theft.