He’s one of Hollywood’s best-known bad-guys – so you might expect new prequel film ‘Minions: The Rise of Gru’ to explain exactly how he became such a villain.

And you’d be right, unless you’re viewing the movie in China where it appears the country’s notorious censors have tried to turn the supervillain into a good guy.

In a series of subtitled post-credit scenes added to the film when it released in China last week, are told Gru ‘eventually became one of the good guys’ who was ‘dedicated to raising his family’.

That is in stark contrast to Western cinema-goers, who are shown how Gru learned to trick the police and overcome his rivals to become the world’s premiere evil-doer. 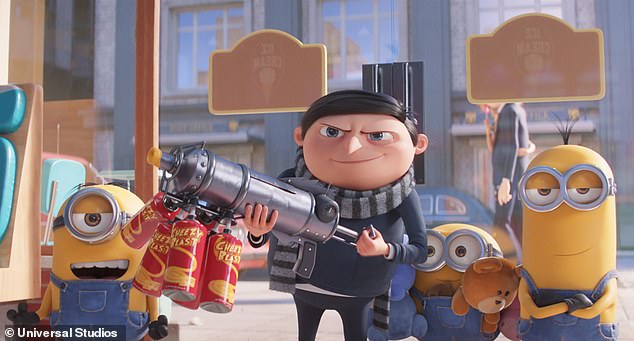 Minions: The Rise of Gru opened in China on Friday, but the film appears to have fallen foul of the country’s censors who changed the ending

Gru does eventually become a better person, but that transition happens in the original Despicable Me film – which is set after the events of ‘Rise of Gru’.

In the Chinese version, the police are not so easily tricked and capture Knuckles who is locked up for 20 years for his crimes.

While in jail, he becomes a reformed man and discovers his ‘love of acting’ – setting up a theatrical troupe for the other inmates.

Minions: Rise of Gru appears to have been tailor-made to appeal to audiences in China, as Hollywood movie-makers chase lucrative revenues that the country’s huge audiences can rake in.

The plot involves a race to capture the ‘zodiac stone’, which has powers linked to the Chinese zodiac, and the film’s climactic action sequence takes place in San Francisco’s Chinatown.

The movie debuted at third place at the Chinese box-office, raking in just over $3million in one day and making it the biggest Hollywood animated film opening in China since the pandemic started, according to Deadline.

It is not the first time a popular foreign film has been altered for cinemas in China, where the entertainment industry faces some of the world’s strictest censorship rules and is tasked with promoting ‘healthy’ values.

David Fincher’s 1999 cult classic ‘Fight Club’ – about a group of nihilistic anarchists aiming to topple civilisation – has also been targeted.

When the cult hit was uploaded to streaming platform Tencent Video in January, viewers watched police foil the protagonist’s plot to achieve a global reset by blowing up the headquarters of the world’s largest banks.

In the original movie, the final scene shows the bank buildings collapsing as explosives hidden in their basements detonate.

And the highly anticipated return of US sitcom ‘Friends’ to Chinese streaming platforms in February prompted fury among fans after viewers noticed a LGBTQ plotline was cut. 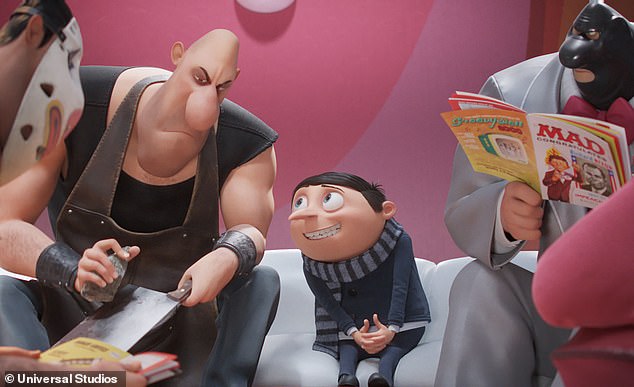 Chinese viewers are also told that police catch Gru’s mentor – Wild Knuckles – and lock him up for 20 years, while he evades capture by faking his death in the original

It is unclear if the ‘Minions’ ending was altered due to censors’ demands or if producers considered it a more palatable conclusion for the Chinese market.

Universal did not immediately respond to AFP’s request for comment.

Social media reaction to the Chinese ‘Minions’ ending was mixed, with one person on the Twitter-like Weibo social media platform saying they had gone to the cinema specifically to see the new ending but was disappointed that it was ‘just subtitles’.

Other fans were upset by the discontinuity between young Gru’s virtuous transformation in the new film, a prequel, and his continued villainous behaviour in the other films, set in the present day.

‘We can only say that the Gru of the main films lives in another parallel Minion universe,’ one Weibo user complained.