Many letters have been sent to this publication following the announcement of the death of Donald Harrison, the Tuesday crossword compiler for The Sydney Morning Herald and The Age. Harrison began supplying crosswords to the SMH in 1995. At that time, the paper had called for submissions from compilers, and his was one of the three to be accepted.

His clues reflected an enormous breadth of knowledge, accumulated over a long life. Harrison played football, tennis and cricket in his youth. He had trained as an architect and travelled widely. He had compiled hundreds of puzzle books, even writing medical crosswords for a pathologists’ magazine. Harrison loved the arts and had a fine singing voice. 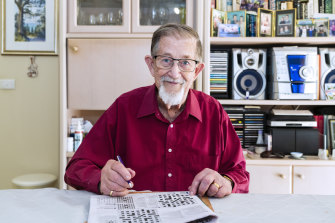 Donald Harrison at his home near Bateman’s Bay.Credit:Lee Grant

During one of the lean times in his career, he had answered an advertisement for tall men required for theatrical work and ended up in the cast of Aida at the Sydney Opera House. He was an extra in five operas, appeared in television commercials and worked on the film Caddie. There were offers for continuing roles in television, but he chose to concentrate on his architectural business.

Harrison was born and educated in Grafton in the Northern Rivers region of NSW. Like his brother Malcolm and sister Rosalie, he was taught to strive and to value learning. Father, Wesley Harrison, was a senior surveyor with the Department of Main Roads and mother, Marjorie née Macklin, liked crosswords. Donald could always recall that first cryptic clue he solved, aged 11, while, looking over his mother’s shoulder – New one; new gas (4)*

Harrison moved to Sydney in 1949 to study civil engineering, then two years later, transferred to architecture. He married Olive Gates in 1955. He also gained an SMH crosswords sparring partner in his father-in-law. Children Neale and Christine were born.

After graduating, Harrison was delighted to find work with an architecture firm in his beloved Grafton. The family increased with the births of Gregory and Wendy.

In 1972, he was asked to join a development company in Sydney and became a director. Interest rate hikes and a credit squeeze under the then Whitlam government had a disastrous effect on the building industry. The stress led to a heart attack and the breakdown of his marriage.

He married Hungarian-born Maria Gergaly in 1981. Maria’s gift of a small electronic thesaurus to an ill and bed-ridden Harrison in 1993 was the catalyst for a new career as a cruciverbalist. Grids were hand-drawn with ruler and pencil and samples were sent to magazines and newspapers.

The couple retired in 1996 and moved to the holiday house they had built near Bateman’s Bay. Harrison bought his first computer and software. Since then, he has written many hundreds of puzzle books. Cancer was to recur several times, so Harrison would supply a year of puzzles in advance in case of illness.

The fires of 2019 were to test Harrison’s resilience. They were ordered to evacuate. Harrison packed the car, calmed his wife Maria who had early dementia, and drove 260 kilometres to his son’s home. Three days later he returned, to continue disrupted cancer treatment.

Harrison was a long-time supporter of the Wayside Chapel. His favourite way to raise funds for charity was with a trivia night, and for that he had created a gargantuan database of questions.

He loved to interact with his readers. It could be subtle, such as choosing “Evans Head” for the letter E, to delight a posse of puzzlers based in that North Coast town, to something much larger. Several years ago, a reader sent in a request for the Quick crosswords to be made a little easier. His elderly wife had dementia and doing the crosswords gave her comfort and calm. Harrison not only compiled, for free, 3000 crosswords, but he also drove to the far north of NSW to deliver them to her. He did it in memory of his late sister who’d had dementia. In recent years, he created more than 10,000 of these easy quicks and emailed them to readers who wanted them as an antidote to stress.

Harrison had a healthy ego and cheekily put a big H in his grids. As a tribute to his recent 90th birthday, the grids of fellow compilers have sported the H. Crosswords brought joy to Harrison and he said it was the greatest job of his life.

He is survived by his wife, his first wife, four children, 10 grandchildren and 11 great-grandchildren.