The company of high-profile surgeon Munjed Al Muderis continued to use a faulty medical part that the company knew caused amputees to fall and injure themselves.

Leaked documents obtained by The Age and The Sydney Morning Herald show the company declined to launch a formal recall of the faulty part even after its clinical researcher recommended immediate action be taken. 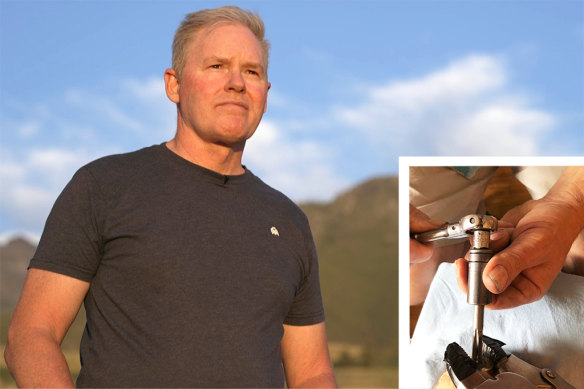 US patient Chris Bruha’s prosthetic leg snapped while he was walking. His friend fixed it in an hours-long process. Credit:Nine News

The part, called a Type B dual cone, was a crucial component of the implant designed by Al Muderis, who is a former NSW Australian of the Year, and used in his signature “osseointegration” procedure, in which a titanium rod is inserted into the residual bone of an amputee, then protrudes through the skin to connect to a prosthetic limb. The dual cone is the connecting piece.

A 22-page draft research report from Al Muderis’ company, Osseointegration Group of Australia, found in April 2018 that the part, which was designed by the company, carried an “unacceptable” risk of breaking, with “high probability of occurrence and high consequence of hazard”.

The report by researcher William Lu found that breakages could occur when amputees were walking, sitting or doing light exercise.

According to the report, the “widespread” and “spontaneous” breakages of the part occurred at a higher rate than competing models and were not confined to any particular batch or size. Changing parts after they break can be a “lengthy and extremely undesirable process”, involving several hours of drilling, the report said.

Lu recommended the part be immediately discontinued to “avoid any further consequences”.

The company initially planned to launch a formal recall and began collecting images and information to send to the manufacturer, Permedica. In an email to staff, managing director Nick Birbas told staff the formal recall would be launched because the company did not want to be seen “to cut any corners on cost”.

However, three months after Lu’s report, Birbas told staff in another email the “jury was out” on what caused the breakages. The company would only recommend replacement if a patient was heavy or lived an active lifestyle. Others would keep the part.

Another internal email says it was easier to remove the dual cones before they break.

The Therapeutic Goods Administration (TGA), which regulates medical devices, was alerted in 2018 to the higher-than-average number of breakages and approved the company’s approach. A spokesperson said this week the part remained “suitable for use” but required the company to send additional information to patients.

Lawyers for Al Muderis told The Age and The Sydney Morning Herald in a statement that all complaints had been investigated by the regulators and dismissed. The lawyers said dual cones need to be regularly replaced and that patients are responsible for maintaining their parts.

“Some amputees, after they receive osseointegration surgery, resume a very active lifestyle. Some patients break their dual cone due to excessive activity. Some patients resume riding, hiking, jogging, swimming and there have been patients who have even taken up skydiving,” the statement said. “Professor Al Muderis cannot limit what patients do, even though he advises them to not take up high-impact activities.”

However, the selective replacement approach was privately criticised within the company’s own team of doctors, including by US surgeon Solon Rosenblatt, who accused the company of prioritising profits over patients in private correspondence to colleague Fred Hernandez. 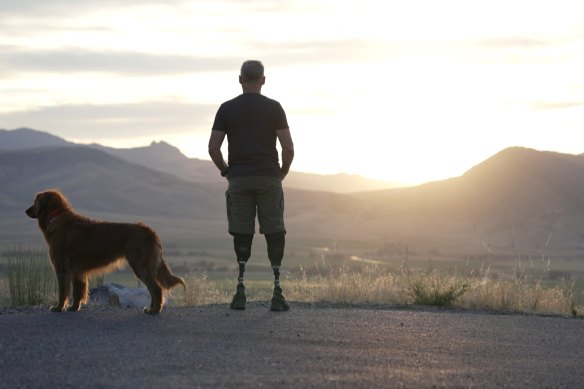 Chris Bruha was given the faulty part in July 2017.Credit:60 Minutes

“[Their] ONE AND ONLY loyalty is to MONEY,” Rosenblatt said in one text message.

In an email dated October 2018, he wrote: “For a time, ALL patients who had received a Type B implant were sent a new reinforced dual cone manufactured by Bres Medical with instructions on how to replace the old one … But that was becoming too expensive, so [the company] decided to only replace those dual cones as they broke!”

When asked about whether there were adverse findings against the part, Al Muderis told The Age, The Sydney Morning Herald and 60 Minutes: “Not to my knowledge.” He said he had insisted that the company replace the faulty cones and there had been “no failures since”.

US patient Chris Bruha was given the faulty part in July 2017. Six months after his surgery, the company sent him a replacement part. The following year, that broke too.

“It just snapped and I went down,” Bruha said. “I’m a retired firefighter so getting banged up is not a big deal. But it’s just disturbing when you go to take a step and nothing is there.”

Bruha paid $US150,000 for his osseointegration surgery but said he received limited support when the dual cone broke. His friend, who had no medical experience, replaced the parts in a painstaking process that took more than five hours. Later, Bruha received an invoice.

“They sent me a bill for the dual cones, both of them, which I just left and ignored,” he said.

Rosenblatt filed an official complaint with the medical regulator, the Australian Health Practitioner Regulation Agency (AHPRA), in December 2018. The complaint said Al Muderis had “placed the public at risk of harm” by practising in a way that “constitutes a significant departure from accepted medical standards”.

Rosenblatt claimed the implant had not gone through sufficient testing before being used in more than 100 patients from Australia, the UK and US.

“Several of the implants have broken. Dr Al Muderis’ own research consultant suggested that the portion of the implant that could be changed should be changed as soon as possible,” Rosenblatt wrote to the regulator. “Fortunately, none of the patients who have experienced a broken implant have been severely injured.”

A spokeswoman for the TGA said after receiving the 2018 complaint, the regulator launched an investigation and later issued a safety alert, which “reminded patients about the two-year service life of the prosthetic and the need to inspect all components regularly”.

Osseointegration Group of Australia told the TGA it stopped using the faulty part in February 2019 – 10 months after Lu’s report called for immediate action.

Rosenblatt confirmed to The Age, the Herald and 60 Minutes the defective dual cone was used in patients until a replacement was designed.

“We told patients we’re working on a new design; we don’t have one yet. We don’t have anything better, but obviously, you want to continue walking,” he said. “I [didn’t] have any choice but to put back in another Type B dual cone.”

Al Muderis said he was not responsible for the breakages. “I’m a clinician. I’m a surgeon. We need to separate here between the engineering side and the manufacturing side … I own the patent. I designed the parts, but I wasn’t the engineer.”

Patients who received the faulty part were given a replacement part manufactured by Bresmedical, which Birbas said was made with “added strength for patients that are at risk of compromising their dual cone”. Some patients raised concerns about replacement parts.

In an open letter to patients, Birbas criticised those who questioned the process.

“Ultimately, a surgeon would use their clinical judgement to determine which implant is best for a patient,” he said in a memo to patients.

“Typically, a patient does not have the clinical knowledge nor experience to question a health practitioner on what medical device is suitable for them.”

Al Muderis has achieved fame as an Iraqi refugee turned high-profile surgeon. He became NSW Australian of the Year in 2020 and GQ Man of the Year for his contribution to medicine and refugee advocacy.