NEW YORK — A few minutes after midnight on Monday, Aaron Judge stepped to the plate at Yankee Stadium. He could have done it himself, been the hero at least one more time with a home run for the history books. He could have tied the game with two outs in the bottom of the ninth to keep the season alive a little longer.

But if it’s going to end, it might as well be poetic. And so Judge himself slapped a softly hit grounder back to the pitcher for the final out. He trotted straight from the first baseline into the dugout, strode through the somber procession of players packing up, and walked right down the tunnel into the clubhouse.

Despite a small speed bump in the Bronx, the Houston Astros were rolling right into their fourth World Series appearance in six years with a 6-5 victory. The Yankees were eliminated. And just like that, Judge ceased to be one of them.

Rain had extended his tenure as a New York Yankee by about an hour and half. Flashes of life from a dormant offense offered hope for more. But ultimately, it will take some as-yet untold amount of money — one thing we do know, it’ll be more than $213.5 million — to keep Judge in pinstripes. When he addressed the media an hour later, it was not as the almost-captain of the most storied franchise in the sport, but as the most tantalizing storyline of the upcoming offseason.

There are a lot of different ways to describe the Astros’ almost unmitigated dominance over the Yankees this season — and I’m sure masochistic fans can marinate in all of them in the wake of this elimination, if they want — but here’s one: Coming into Sunday, across 10 regular-season and postseason games, the Astros led in 463 plate appearances, the Yankees in just seven. That works out to be an 8-2 record in favor of the Astros, with the two Yankees’ victories coming on walk-offs.

The Astros have been, in a word, unstoppable this [pick your preferred time frame: postseason, season, past six years]. Their modus operandi has evolved over half a decade, with the 2022 iteration based on a simple formula of Don’t Let The Other Team Score. In the regular season, Astros pitchers had the highest combined WAR of any staff, and the lowest ERA in the American League. In October, when covering innings with trustworthy arms becomes a stressful patchwork puzzle of potentially calamitous decisions, the Astros have seemingly too much reliable starting pitching. (It’s hard to win an 18-inning game, for instance, against a team that can pull a starter capable of throwing five scoreless innings without breaking a sweat from the bullpen.) 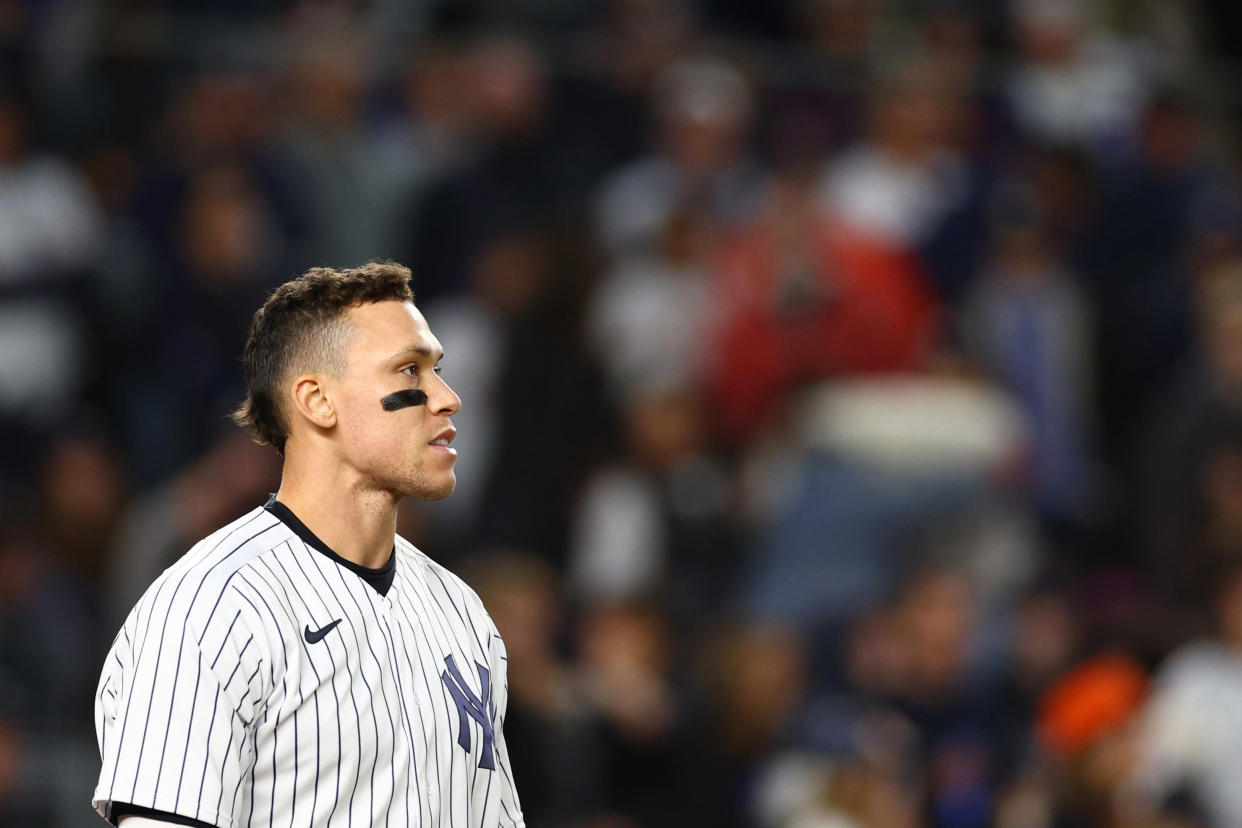 And so it’s little surprise that the Yankees’ top-heavy lineup, carried in the regular season by Judge, now gone cold, was held to just four runs across the first three games. Entering the win-or-go-home Game 4, they were batting a combined .161 in the playoffs, the lowest of any team in postseason history with at least 200 plate appearances. And that includes the breakout performance of Bronxville Bomber Harrison Bader.

To their credit, in the final game, they finally looked different. With their season on the line, the Yankees jumped out to an early and rare lead on three singles and a hit by pitch. That one held for 15 at bats before eventual ALCS MVP Jeremy Peña launched a 408-foot three-run home run to tie it. One pitching change and four batters later, Houston would again have a lead.

New York started Nestor Cortes Jr., whose All-Star season and sub-2.50 ERA had taken him from quirkily effective to unlikely ace. He last pitched in the decisive Game 5 of the division series against the Cleveland Guardians, giving up just one run to extend their season once. Tasked with doing so again, he looked shaky. With his command and velocity suffering by the third inning, manager Aaron Boone and the athletic trainer made a mound visit. Cortes stayed in the game just long enough to give up that three-run shot and later the team announced he’d been removed with a groin injury.

Bader’s fifth home run of the postseason — tying his regular-season total — gave the Yankees their second lead of the night, setting up an opportunity to blow it in dramatically inept fashion. An error on what could have been an inning-ending double play in the seventh led to RBI singles from Yordan Alvarez and Alex Bregman to put the Astros up by one. Finally, a lead that would hold. The scoring was done. Judge would finish the night 0 for 4 with a strikeout.

Fairly or not, the bifurcated identity of the 2022 Yankees was always going to be retroactively collapsed into something simple by their postseason performance. A ring, or at least a pennant at the hands of the Astros, meant they’d be remembered for their 61-23 start, a 117-win pace, and Judge’s historic 62-home run season. An early exit and they’d be the team that went 38-40 from then on, and choked in the postseason to squander Judge’s final season under team control. New York teams don’t get the luxury of celebrating second place.

“I mean, this is as bad as it gets,” Boone said after a lengthy postgame team meeting.

Like unhappy families, losing clubhouses are all different. They can feel like a funeral or the end of a really good party, full of good-natured goodbyes or stunned silence. The Yankees opted to keep whatever they were feeling mostly under wraps. Half an hour after the loss, Jose Trevino, a catcher traded to New York just before he went on to have a surprise All-Star season, sat stone-faced in full uniform staring into the middle distance. If he was reckoning with having emotional highs and lows so close together, separated by a sudden crash, he didn’t say as much.

“What you can do in an offseason that gets back to this point and takes you over the hump,” he said. “That's what I was thinking about.”

And Judge refused to cop to any reflection or prognostication predicated on his impending free agency.

“I’ve got plenty of time to figure that out,” he said to one such question. “Still got the taste of the game in my mouth,” he said to another. 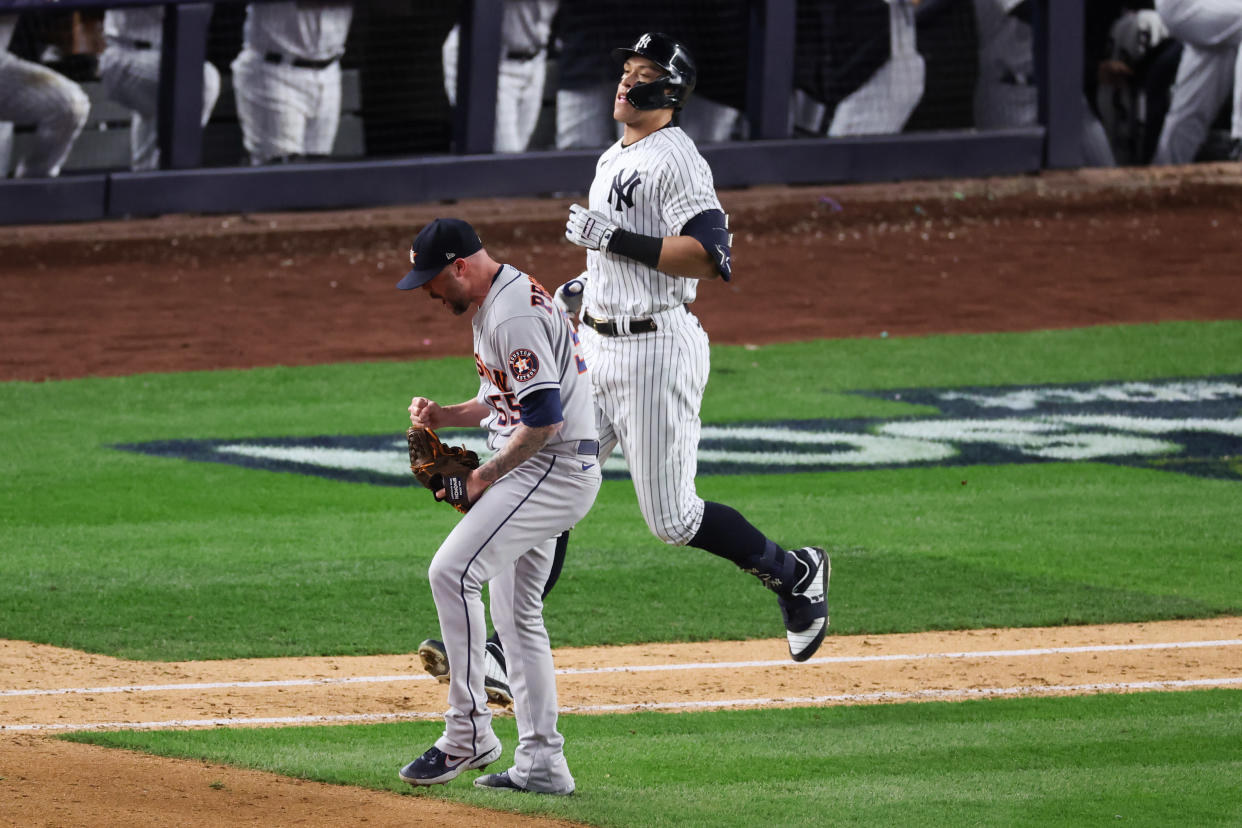 If you were looking for clues that he wants to come back, they were there — in the blue-and-white (but also black?) tie-dyed fleece he wore to address the media. In the pronoun choice when he tried to put a positive spin on the situation, saying, “When we finally get there and secure this thing, I think it'll make it a lot sweeter going through tough times like this.” And in the reverence with which he spoke of being a Yankee.

“I always check myself pregame, when I say a little prayer, and I kind of look around the stadium and pinch myself,” he said. “So it was a special time and I just kicked myself for not bringing home that championship for ‘em.”

Wait a minute, was that last bit a sign he’s not coming back?

There will be plenty of time to consider and try to calculate the kind of production a 31-year-old Judge will provide to his 2023 team. Time to speculate about his priorities and whether anyone has ever bet on themselves so successfully. But as it stands, Aaron Judge will be named the American League’s Most Valuable Player for his feats as a Yankee while he’s a free agent. No one knows yet where he’ll be when he receives the hardware.