Mohammed Hamdan suffers leg injury after a bomb planted in his car detonates in southern Lebanese city of Sidon. 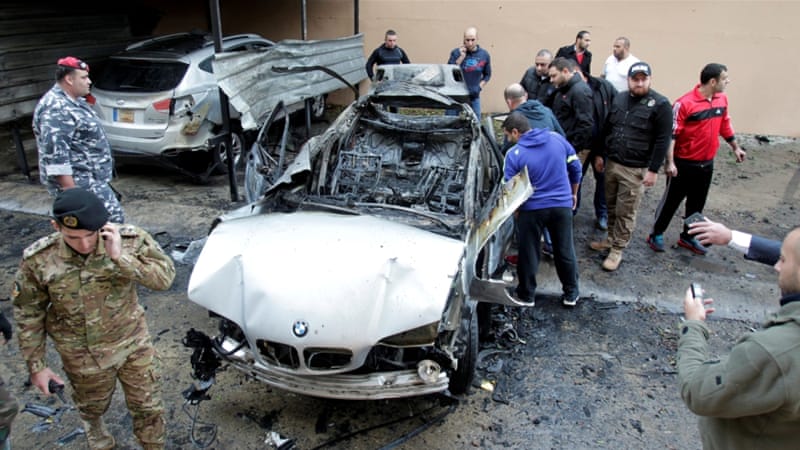 A car bomb explosion in the southern Lebanese city of Sidon has slightly wounded a member of Hamas, according to the Palestinian group, which blamed Israel for the assassination attempt.

Mohammed Hamdan suffered a leg injury on Sunday after a bomb planted in his car detonated, Hamas’ media group said in a statement.

Hamdan was taken to a local hospital for treatment, according to local media reports and a photograph released by Hamas.

Lebanese news outlets said the blast took place as the Palestinian was getting into his booby-trapped BMW in the area of al-Boustan al-Kabir in Sidon, some 40km south of the Lebanese capital, Beirut.

The bomb used about 500 grams of explosives and was placed under the driver’s seat, according to the Lebanese National News Agency.

The explosion destroyed the vehicle and caused damage to a nearby building, sending black smoke rising above the city.

Firefighters rushed to the scene to put out the flames, while security forces cordoned off the area.

Hamas’ statement described Hamdan as one of its “cadres” in Sidon.

The group has previously accused Israel of being involved in the assassination of a number of its members inside and outside Palestine.

In November 2017, it blamed the Israeli national intelligence agency Mossad for the killing of Mohammed al-Zawari, a Tunisian commander of Hamas’ armed wing, the Qassam Brigades, after conducting an 11-month-long investigation.