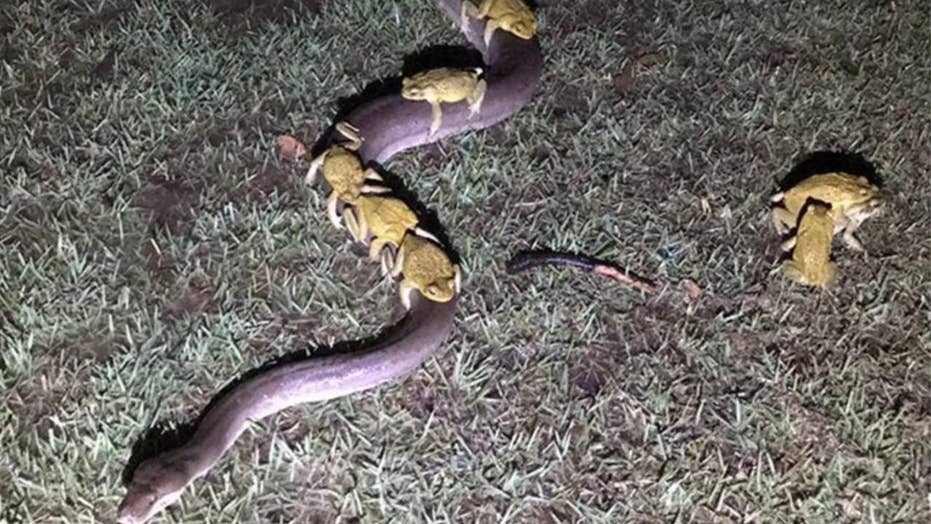 He's just not that into you.

Paul and Anne Mock were at their home in Kununurra, a town in Western Australia, when they spotted the toads on what they thought was a “python express” on Sunday. The couple told Guardian Australia the town had just experienced heavy rainfall that filled their dam and “the lake was so full it had filled the cane toad burrows around the bank and they were all sitting on top of the grass – thousands of them."

Paul Mock said he spotted Monty, the large python that lived on the residence, slithering toward him in an attempt to flee the water.

“He was in the middle of the lawn, making for higher ground,” Paul Mock said. “He was literally moving across the grass at full speed with the frogs hanging on.”

Paul Mock’s brother, Andrew, then snapped a photo of the 10 toads on the python and posted it on social media, prompting amusement followed by shock.

“68mm just fell in the last hour at Kununurra. Flushed all the cane toads out of my brothers dam. Some of them took the easy way out – hitching a ride on the back of a 3.5m python,” Andrew tweeted in a post that garnered more than 9,000 likes and hundreds of replies.

“A metaphor for the relationship between public transportation and the tech industry,” one person responded.

However, Jodi Rowley, a senior lecturer in biological sciences at the University of New South Wales and amphibian expert, gave a more thorough explanation Monday of what exactly was occurring — and it was not "PG."

Rowley also posted a picture of a past incident when another indiscriminate cane toad was “trying to mate with a rotting mango” in North Queensland.

Cane toads are pests in Australia — to humans, pythons and mangos, evidently — and known to damage ecosystems. Millions of the venomous amphibians have been invading communities, leading the government to ask residents to collect and dispose of them, according to the National Geographic.