Can Meghan Markle save Posh’s troubled empire? How the Duchess could help turn around the fortunes Victoria Beckham’s fashion chain after adopting her clothes, friends and lifestyle

The power of royal patronage can be enough to make — or even save — a brand.

So there was something deeply loyal, and very timely, about the outfit chosen on Christmas Day by the Duchess of Sussex.

Of course, the main message of the day was that there is no rift between Meghan and the Duchess of Cambridge — and both women seemed to work hard to make that clear. 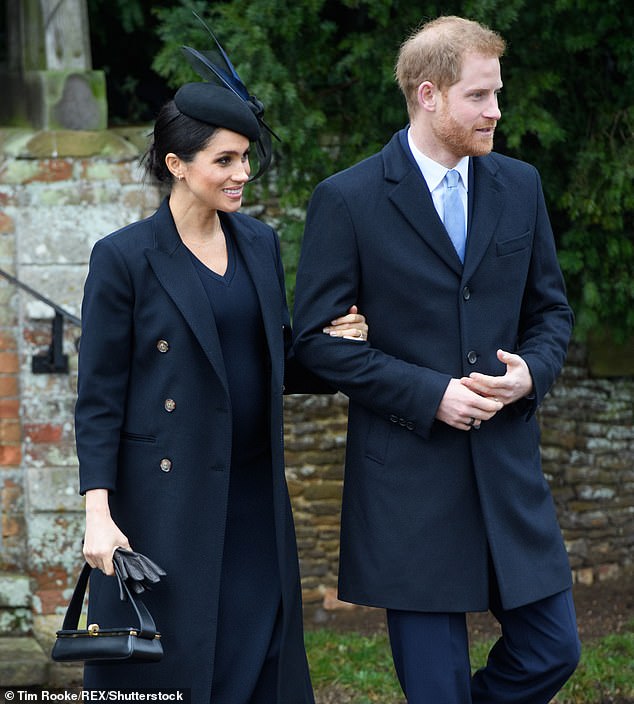 But another signal of support was being very loudly sent to her friend and country neighbour, Victoria.

And, with the news last week that Posh’s fashion empire is again in the red — posting losses of more than £10 million at Companies House — plus the report that husband David is no longer prepared to pump money into his wife’s venture, the Duchess’s decision to show her backing surely speaks volumes about their friendship.

Indeed, Meghan could even help Posh turn her fortunes around. And, as we see here, their links go deeper than you might think . . .

STYLE SISTERS WITH A BLOSSOMING FRIENDSHIP

Victoria has been a kindly and constant influence, growing ever closer to Meghan, 37. By the time that Meghan and Prince Harry became engaged, she and Victoria were said to have ‘grown close’ and would ‘regularly text’.

Undoubtedly, a shared love of fashion connects the two women. Meghan admired Victoria’s clothes long before she even met Harry. In 2013, the then-actress gave the Victoria Beckham label a boost when she wore one of her dresses to a gala event at the New York Film Festival. 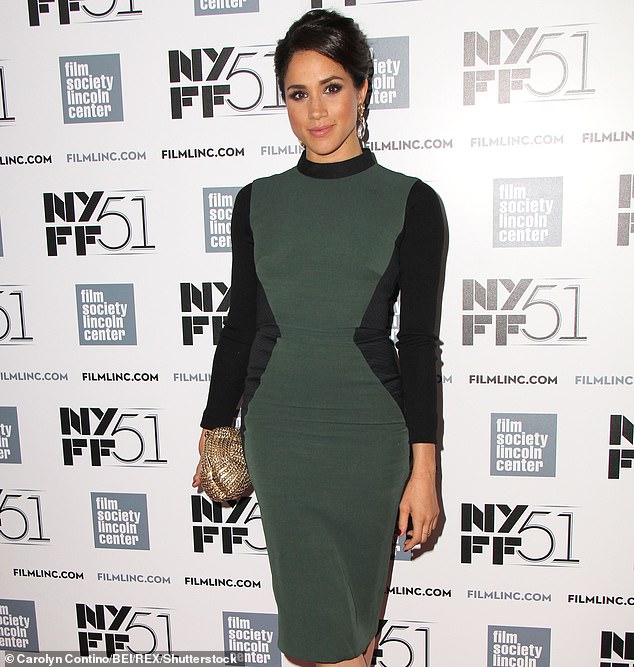 Meghan, in 2013, wearing a Victoria Beckham dress to a gala event at the New York Film Festival

Victoria has previously said that she never gives freebies, because she cannot afford it, so we must assume that Meghan paid for the dress — and for all her subsequent purchases.

Meghan also gave the designer her seal of approval by selecting a cashmere knit for one of her engagement portraits with Harry.

It was their men who got them together

David Beckham and fun-loving Prince Harry have spent a lot of time together both doing charitable work and socialising — and Victoria and Meghan are said to have been introduced to each other by David at members’ club Soho Farmhouse fairly early on in the royal courtship.

David was involved in the Queen’s Young Leaders Award in 2016, which Prince Harry attended.

He was also part of the team bidding to host the World Cup in 2018 or 2022 and travelled to Johannesburg with Prince Harry in 2010 to meet with Fifa officials.

Though the bid was not a success, it cemented their friendship. There have been at least two big nights out in London together — one at the end of 2011 and one at the start of 2012, both at the Arts Club in Chelsea. By all accounts, both were heavy drinking sessions that lasted until around 3am.

David’s new passion for shooting — fostered by director Guy Ritchie — gives him even more in common with Harry.

Victoria has her own connections to Prince Harry, first meeting him more than 20 years ago in November 1997 when they both visited South Africa.

They held hands — though it was said that schoolboy Harry’s favourite ‘Spice’ was Emma Bunton.

In 2015, three of the Beckham children, Romeo, Cruz and Harper, were introduced to Prince Harry on the sidelines of a Unicef charity football match.

By this time, David and Victoria had already attended the wedding of Prince William and Kate Middleton, in 2011, when Victoria was pregnant with Harper.

David said the following year: ‘We had to pinch ourselves when we got the invite. I’ve become friends with Prince William and Harry as well. We were brought up to love the Royal Family and, when Princess Di was around, the love for her was incredible.

‘And then you watch the lives of William and Harry and it’s kind of like the Truman Show, seeing them grow into young men.

‘It makes you proud to be English, watching them grow into the people they are today.’

Early last year, it was being reported that their friendship had grown and that Meghan was in the habit of consulting Victoria about style. Vanity Fair reported: ‘They get along well and have been in touch recently. Meghan really likes Victoria’s style and was keen to pick her brains about pulling together a working wardrobe.’

Victoria’s designs are a ‘natural fit’ for Meghan then, and — unlike her very expensive love of Dior and Givenchy — at least when she chooses to wear Victoria Beckham, she is buying British.

Victoria and Meghan also have friends in common, most notably fashion icon Olivia Palermo. Olivia, based in New York, has been close to Meghan for years — and Meghan calls Olivia her ‘style crush’.

Meanwhile, Palermo also loves Victoria Beckham and has been championing her designs for years — wearing her clothes in a magazine shoot in 2011 and hailing her ‘the queen of sleek’ in 2015.

The former Spice Girl is one of a handful of trusted celebrity friends who saw Meghan when she retreated from the limelight over the summer.

Soon after their May wedding, the former actress put down roots with Harry in a rented house on the Great Tew Estate in Oxfordshire — and saw Posh regularly at the Soho Farmhouse members’ club that neighbours both homes.

Victoria and her family are seen at the private club almost daily during the school holidays. Their converted barn is just across some fields. Indeed, the Beckhams are such a fixture that staff there even take their spaniel Olive for walks.

Sources indicate that Meghan and Harry also made regular visits, arriving in an anonymous car. I’m told Meghan took exercise classes at the spa and that she and Harry also popped in some evenings for private dinners in the ‘Shack’ —- a small building in a courtyard which was turned into a private VVIP dining area for the royal couple and their guests.

Meghan, at the time, was in the early stages of pregnancy and it seems to have suited her to mostly drop out of the limelight.

Was Posh one of the very few — apart from Meghan’s mother Doria Ragland and best friend Jessica Mulroney — who visited to advise her on her wardrobe for the Australia tour and to be let into the secret of her pregnancy?

Sources at Soho Farmhouse believe this is ‘highly likely’.

CAN SHE HELP LIFT POSH’S FORTUNES?

With the publication of her accounts last week — Victoria Beckham Limited (VBL) filed its 2017 accounts a couple of weeks late this year, meaning they only became available for viewing online at Companies House on Christmas Day — it would seem Mrs Beckham needs all the high-profile friends she can get.

For the figures show not only soaring losses, but operating costs rising on a rather breathtaking scale, too. While losses stand at £10.3 million, the good news is turnover was up to £41.7 million from £35.7 million the previous year. But the cost of sales — what the company spent in pursuit of that £41.7 million turnover — stands at £25.8 million.

That is a rise on the £19.5 million the previous year, which was described to me by one fashion expert as ‘out of control’.

One particularly expensive part of the empire is her enormous flagship store in Dover Street, in the heart of London’s Mayfair.

‘The scale of it is excessive. There is very little product in there and I have never seen a customer inside when I have been past it.’

Banks adds that Posh’s costs are ‘eye-watering’. He says: ‘It’s clear the strategy is to keep on throwing money at the Victoria Beckham brand. Their costs seem to be out of control.’ 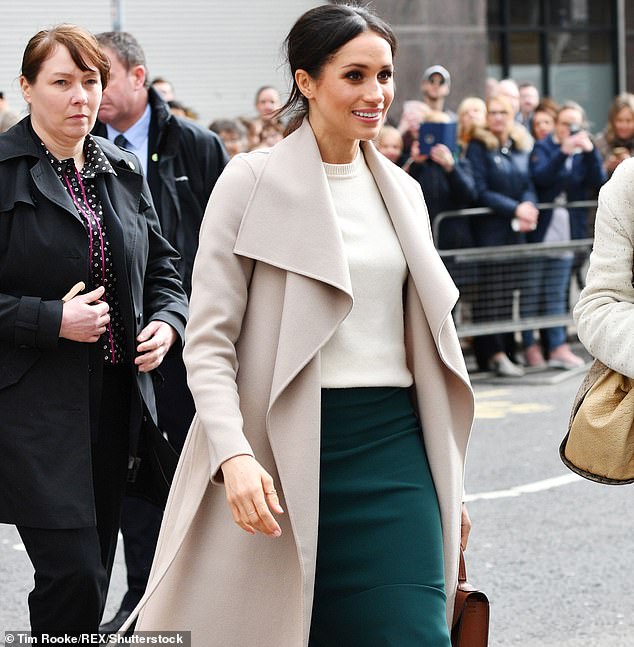 Meghan (pictured in March wearing a Victoria Beckham sweater) and Posh have been good friends for years, and the duchess may have told her about her pregnancy long before it was announced

In a statement, VBL said that it had been ‘investing for future growth and building its senior leadership team’.

The statement added that shareholders were committed to helping the brand break even in the medium term by cutting costs and driving growth.

Paolo Riva, who was announced as CEO in June, said: ‘We will continue to invest in growth markets such as the U.S. and Asia while also ensuring we have the right strategy to ensure profitability over the medium term.’

Victoria and Meghan also bonded over hair and beauty tips, with 44-year-old Posh recommending the services of London-based facialist Sarah Chapman to Meghan in the week before the royal engagement was announced.

Meghan Markle was just 13 when her mother took her for her first facial and she has long been a fan of various pampering treatments.

Victoria is a kindred spirit. She suffered from such bad spots in her youth that the girls at school called her ‘Sticky Vicky’. Today, she is famous for keeping herself in tip-top condition.

Aside from loving Sarah Chapman, who charges £600 for a 90-minute treatment, Victoria also swears by LA’s leading dermatologist, Dr Harold Lancer, who she sees when the family are in California. His clients also include reality star Kim Kardashian.

Meghan favours a different LA practitioner. She used to go to facialist Kate Somerville, who is a big fan of the rejuvenating effects of microcurrent therapies, which strengthen and lift tired muscles.

Unfortunately for Victoria Beckham, despite a wave of redundancies earlier in the year, her administrative expenses have actually gone up and stand at just over £25 million, compared with £23.8 million the previous year.

Last year, NEO Investment Partners pumped in £30 million. It now has a 30 per cent stake in the firm and is said to be implementing ‘root and branch’ reforms via a new chairman who is based in Paris, Ralph Toledano, as well as CEO Riva.

HOW HUBBY DAVID PULLED THE PLUG

Until now, Victoria has been supported by the other parts of Brand Beckham that are making money. The 2017 accounts show money flowing into Victoria Beckham Limited, with £6.8 million from Beckham Brand Holdings, given ‘in return for shares’ in the clothing company.

Alex DeGroote, an independent media analyst, said: ‘The question is whether there is a sustainable route to profit for the Victoria Beckham business.

‘How does this business turn a profit? There aren’t many businesses out there that can lose £10 million every year. 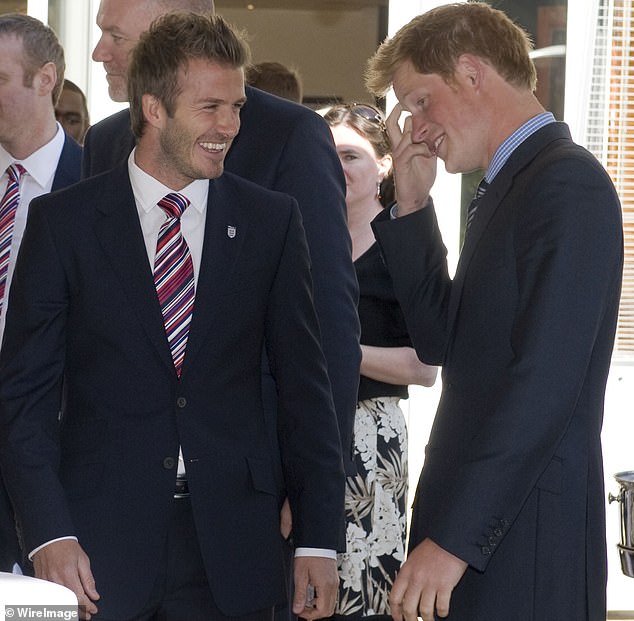 ‘You can see from the accounts that the other parts of the Beckham empire are helping to support Victoria’s business.’ However, reports last weekend said that it would be the last time this happened.

It is understood that David Beckham now wants his wife to take full responsibility for running her company — and she has found investors who have injected £30 million into the label.

A source said: ‘David is super proud of what Victoria has achieved, but he will no longer be putting money in. She has investors now.’

A bold plan is in place to expand and diversify out of high fashion and into profit.

Victoria has ‘sold her brand’ with a licensed collaboration for Reebok. She has also deigned to get involved in a second season of make-up in collaboration with Estee Lauder.

And she has announced that she is going to try her luck at beating the beauty vloggers at their own game with a YouTube channel.

Perhaps she could take tips from Meghan, who, before she became the Duchess of Sussex, enjoyed nothing more than posting endless selfies sharing lifestyle and beauty tips on her now-defunct blog, The Tig . . .