London: Britain is one step closer to banning the boiling alive of crabs and lobsters after the government agreed that they can feel pain and joy.

Campaigners hailed the decision as “groundbreaking” and predicted it would have ramifications across the globe as they fight for an end to boiling crustaceans alive. 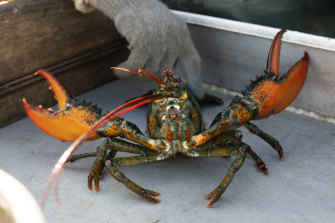 A lobster rears its claws after being caught off Spruce Head, Maine, US. A major study says decapods have feelings.Credit:AP

On Friday, London time, the British government accepted research provided by the London School of Economics (LSE) which said there was strong scientific evidence of sentience in decapod crustaceans and cephalopod molluscs and recommended they be protected in legislation.

The government said it would enshrine the recognition that they are sentient in a new, controversial animal welfare bill it is proposing.

The Animal Welfare (Sentience) Bill, currently in the House of Lords, will establish an Animal Sentience Committee that will issue scorecards on how well government decisions have taken account of the welfare of sentient animals.

Ministers will be required to account to the Parliament for the verdicts.

Animal Welfare Minister Zac Goldsmith said the UK would have “some of the strongest protections in the world for pets, livestock and wild animals”.

“The science is now clear that crustaceans and molluscs can feel pain and therefore it is only right they are covered by this vital piece of legislation,” he said.

While the decision to recognise crabs, octopuses and lobsters as sentient, will not affect the fishing or restaurant industry, campaigners were thrilled.

“This is groundbreaking, no other government has commissioned anything like this to look at the sentience of these animals,” she told The Sydney Morning Herald and The Age.

Asked if the decision went far enough as it does not ban the boiling alive of crustaceans, she said it would encourage change.

“The public being aware that these animals are sentient allows consumers to start making decisions,” she said.

“Things like boiling animals alive that were in the past considered acceptable, this report will really help people to know that that’s not the case.”

Animal Welfare Minister Lord Zac Goldsmith said “the science is now clear that crustaceans and molluscs can feel pain and therefore it is only right they are covered by this vital piece of legislation”.

Booker said the fact a major government had accepted the facts would only help other countries follow.

“The sentience of these animals doesn’t have borders, so the fact that these animals have been recognised as being sentient by this very, large research study in the UK means that other governments hopefully will stand up and take notice, look at the report and come to the same conclusions.”

Some major retailers in the UK are already stunning crustaceans before killing them as a result of campaigns to recognise the feelings of the sea animals.