Save us from the £100 tank of fuel! As forecourt prices hit record high and Treasury lands millions in extra VAT, campaigners call on Rishi Sunak to slash tax at the pumps

Ministers are facing mounting pressure to cut fuel taxes further after the cost of filling a family car with diesel passed £100 for the first time.

The price hit a record average of 182.59p a litre on Sunday, industry figures revealed yesterday. Filling a typical 55-litre tank now costs £100.42 – up from £72 this time last year.

Experts and campaigners accused retailers of ‘mercilessly fleecing’ diesel drivers, with analysis suggesting margins on the fuel have been hiked by nearly 50 per cent.

It means that despite the wholesale price of diesel being cheaper than petrol, the former is more expensive at the pumps.

Petrol prices have also hit an all-time high of 172.73p, meaning the cost of filling up a typical family car with unleaded has soared past £95.

Despite Chancellor Rishi Sunak cutting fuel duty by 5p a litre in March, the Treasury is raking in more tax from drivers than this time last year due to a surge in VAT receipts. 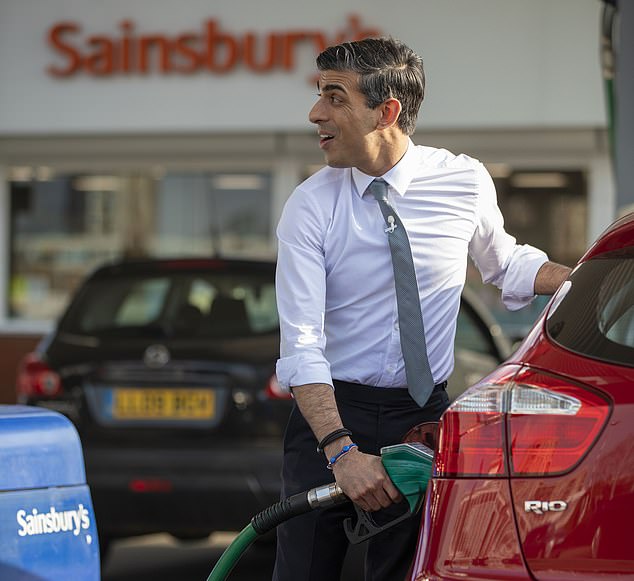 Pictured: Chancellor Rishi Sunak is pictured at the pumps in March after delivering his Spring Statement. Despite Mr Sunak cutting fuel duty by 5p a litre, the Treasury is raking in more tax from drivers than this time last year due to a surge in VAT receipts

Fuel duty is charged per litre, so the amount the Government receives does not increase as prices soar.

But VAT is charged at 20 per cent on the total cost of a litre of fuel, meaning the Treasury takes more when pump prices rise. Multiplied across the billions of litres of fuel sold annually, this represents a huge windfall for the Treasury.

Motoring groups last night pointed out that diesel is the workhorse fuel for van drivers and haulage companies. Their rocketing bills are likely to be passed on to consumers, further pushing up the price of goods in shops.

RAC analysis shows that retailer margins on diesel have surged to 11p a litre in recent weeks, compared to the long-term average of 8p. 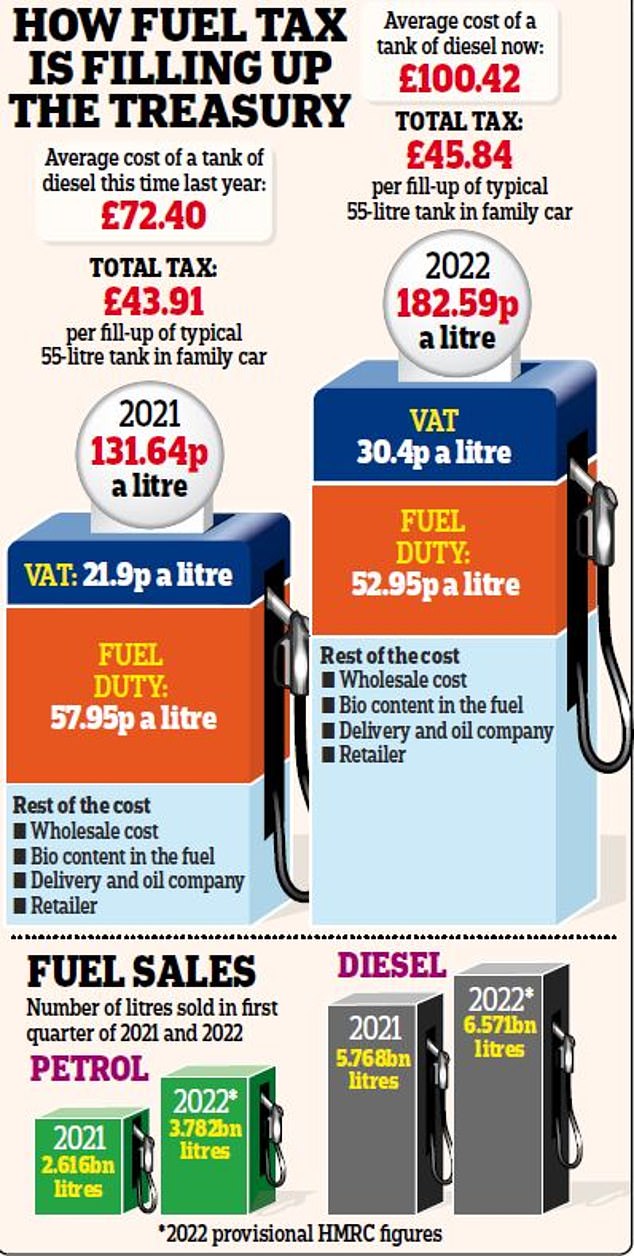 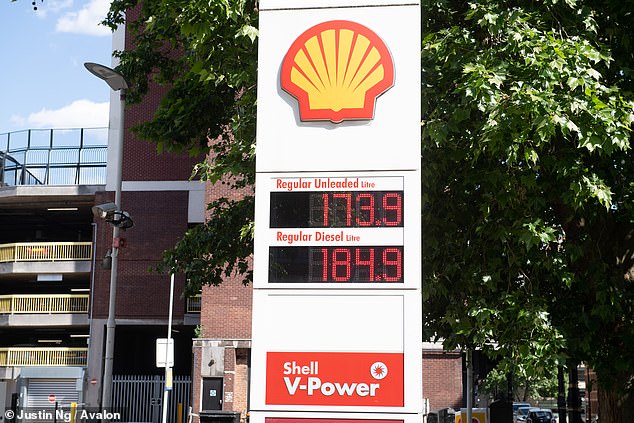 Petrol prices have also hit an all-time high of 176.47p, meaning the cost of filling up a typical family car with unleaded has soared past £95

Why have fuel prices increased so much?

The main reason is the war in Ukraine and the impact of sanctions on Russia, which is the world’s third-largest oil supplier. Uncertainty created by the sanctions has pushed up wholesale oil prices, which are being passed on at the pumps.

Another key reason is soaring demand as economies across the world reopen following the pandemic. Some retailers have also hiked their margins, particularly on diesel, and not passed savings on from temporary drops in the wholesale price.

Less competition among supermarkets, traditionally the cheapest forecourts, has also been blamed.

Why is the Government taking more in tax when it has cut fuel duty?

Because VAT is charged at 20 per cent on the total cost of a litre of fuel. The higher the cost at the pumps, the more the Treasury takes in VAT. Despite the Government cutting fuel duty by 5p a litre in March, VAT on a litre of diesel has gone up by 8.5p compared to the same time last year. For petrol it has gone up 7p, wiping out the savings made from the cut in fuel duty.

When will the prices start falling?

Not any time soon. At the start of May, a benchmark barrel of Brent crude oil was trading at $107. But that jumped to above $119 on Friday. If this trend continues, pump prices will continue to rise.

Spokesman Simon Williams said: ‘It seems very unfair that the Chancellor should be benefiting by around 30p a litre in VAT from sky-high pump prices when hard-pressed motorists are struggling to make ends meet.

‘As VAT is a “tax on a tax” – applied on top of 53p-a-litre duty – it means drivers are paying 83p to the Treasury on every litre of petrol, so more than £45 of the cost of filling a family car is currently tax. We badly need the Government to take more action to ease the burden on drivers.’

The AA’s fuel expert, Luke Bosdet, said: ‘Manipulating margins on fuel sales because one type of fuel has become less lucrative than another is unacceptable. That is particularly true with diesel, the fuel that powers business and haulage.’

Howard Cox, founder of the FairFuelUK campaign, said: ‘Despite the Spring Statement’s welcome cut in fuel duty, little of that fiscal benefit has been seen when paying at forecourt cash registers. So it seems UK drivers continue to be the highest taxed in the world.

‘A shedload of VAT is filling the Chancellor’s coffers which he should be looking to cut.’

It follows reports at the weekend that Boris Johnson wants to name and shame petrol stations which refuse to cut prices, amid fears Mr Sunak’s fuel duty cut has not been passed on in full by retailers.

Mr Johnson has asked the Department for Transport to draw up proposals to expose the offending firms. It could involve the creation of a regulator.

It comes after BP’s profits more than doubled in the first three months of this year – to £4.9 billion from £2.1 billion during the same period last year. Shell’s profits soared to £7.3 billion over the same period, from £2.5 billion last year.

The figures led to the Government announcing a ‘windfall tax’ on oil and gas profits last week. 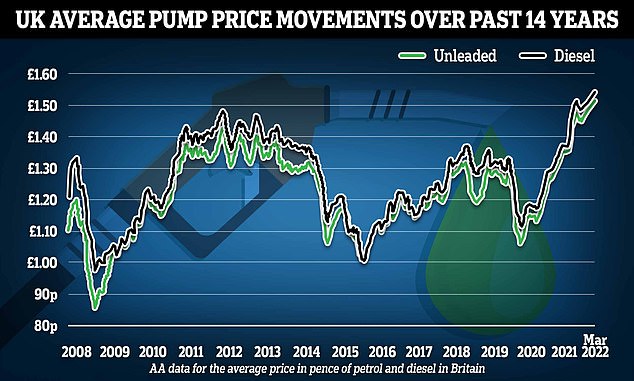 Pictured: A graph showing the UK’s average fuel price movements over the past 14 years

Tory MP Robert Halfon said: ‘Struggling families need a pump watch regulator now. If we can have an energy price cap, at least have a fair price at the pumps.’

Fellow Conservative Craig Mackinlay added: ‘Sadly, the Government’s efforts to work with the fuel industry so that pump prices are competitive, and market driven, ensuring consumers benefit from lower prices, are not working.

‘This is bad for the economy, bad for inflation, bad for business and bad for jobs. That’s why we need to introduce an independent pump pricing watchdog now.’

A Government spokesman said: ‘We know the British people are feeling the impact of rising costs, and to help drivers we have cut fuel duty by 5p a litre for the next year.

‘The Business Secretary has written to fuel retailers to reiterate that this should be reflected in the price people pay at the pumps.’

Ministers plan for energy shortages but play down power cut fears… So will we be able to keep the lights on this winter?

By Daniel Martin Policy Editor for the Daily Mail

Ministers are in talks about reopening a giant gas storage facility in case European supplies from Russia are cut off.

The discussions with energy firm Centrica form part of contingency plans being explored ahead of winter and amid the war in Ukraine.

Yesterday Downing Street said the Government does not ‘expect’ power cuts, despite reports that as many as 6million households could be hit this winter. 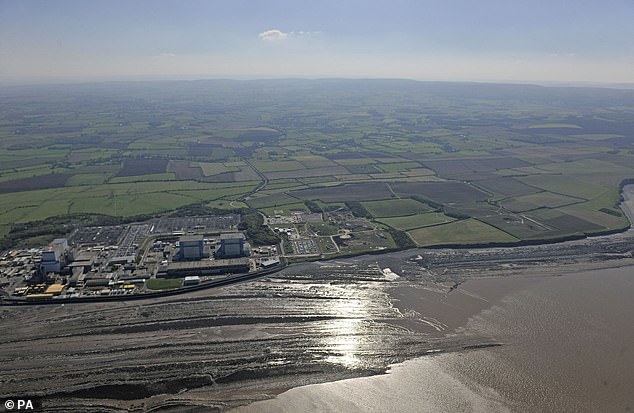 Budget pasta prices soar by up to 50%

Low income households which rely on budget foods are seeing big increases on essentials, with pasta prices rising by 50 per cent.

A study of 30 budget ranges across supermarkets found staple foods have risen by over 10 per cent in the past year.

Figures from the Office for National Statistics (ONS) show the cheapest bread and minced beef have increased in price by around 16 per cent, while rice is 15 per cent more expensive. A study by Which? found one six are having fewer cooked meals due to increased energy costs.

One in 12 have prioritised meals for family members including children, while three per cent say they have turned to a food bank. The ONS figures confirm reports from campaigners, such as author Jack Monroe, whose own research found the prices of budget ranges rising sharply.

Another contingency plan involves extending the life of a nuclear power station.

Business Secretary Kwasi Kwarteng is looking at keeping the Hinkley Point B plant in Somerset open longer than planned – but only if it complies with ‘safety certification’, a minister has revealed.

A No 10 spokesman played down fears of power cuts and rationing, saying: ‘I think you would expect government to look at a range of scenarios to ensure plans are robust, no matter how unlikely they are to pass.

‘Neither the Government or National Grid expect power cuts this winter. We are in a fortunate position – we are not dependent on Russian energy imports and have one of the most reliable and diverse energy systems.’ Centrica’s facility in Yorkshire was mothballed in 2017 when the Government refused to subsidise it.

But the Government said it may now be prepared to contribute to re-establishing a strategic gas reserve.

The talks are part of plans for a ‘reasonable worst case scenario’ in which Russia shuts off all gas supplies to Europe, resulting in Norwegian supplies being redirected from the UK to Europe.

Culture minister Chris Philp was asked yesterday about reports that ministers have been warned of potential power cuts to as many as 6million households this winter. The reports said the Government has drawn up plans for rationed electricity if supply issues deteriorate. 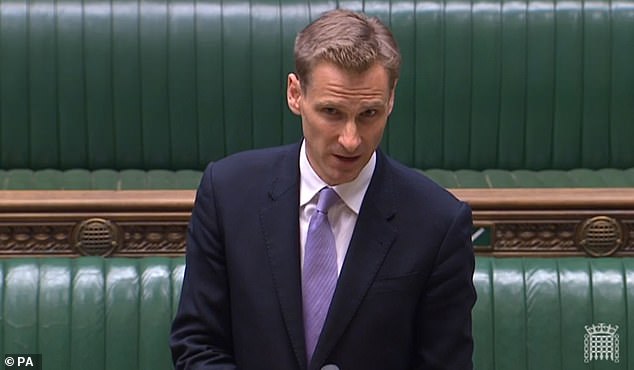 Last month, Mr Kwarteng wrote to the owners of the three remaining coal-fired power stations to ask them to stay open longer than planned. They were due to be closed to help reach climate change targets.

When asked about the risks of keeping the nuclear plant at Hinkley Point B open, Mr Philp stressed ‘safety is paramount’.

No extension to the life of any power station would take place ‘unless the safety certification had been done in a very thorough way’.

Hinkley Point B started generating electricity in 1976. In November 2020 it was announced that it was to move into decommissioning within the next two years.

A Government spokesman said: ‘It remains our firm commitment to end the use of coal power by October 2024.’