Former Royal butler, 67, who was told to use Bonjela for eight months and had wisdom tooth out when his mouth cancer was misdiagnosed as an ULCER wins six-figure payout from NHS 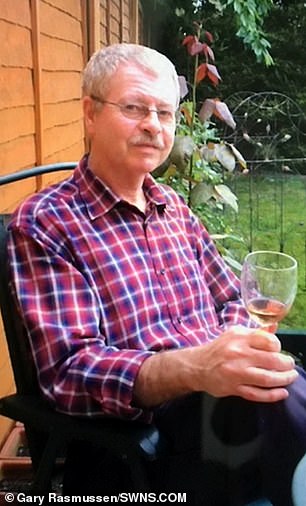 A former royal butler whose mouth cancer was diagnosed as an ulcer has won a six-figure payout from the NHS.

Gary Rasmussen, 67, was forced to quit his job after a series of mistakes by doctors, which saw him receive £100,000 in compensation.

He was told to ‘carry on using Bonjela’ eight months before surgeons gave him a 38 per cent chance of surviving chemotherapy and reconstructive surgery on his jaw.

The 14-hour operation and six weeks of treatment left him unable to swallow, with an almost complete loss of hearing and taste and scars across his face and body.

The food and wine-loving butler, who served the royals in Buckingham Palace, can also no longer drink alcohol and can only eat pureed food.

He said: ‘It’s affected my life completely. They shirked their responsibilities; they should have done better and I’ve not got any faith in practitioner dentists.

‘I came quite close to death. If I hadn’t referred myself for sure it would have killed me.’

Mr Rasmussen said he was awarded a ‘paltry’ sum that just over £100,000. He said: ‘It’s making up for what I owed to people and family; it’s a paltry sum.

‘Bearing in mind what I was doing as a job that was completely curtailed.’

Mr Rasmussen, who lives with his long-term partner Katherine Faux in Dartford, Kent, said his ordeal started when he first went to a local dentist practice in April 2013.

He said: ‘I told the dentist that I had a problem and that dentist said, “oh it will go, carry on taking Bonjela”. Being a dentists’ advice I trusted it and off I went. 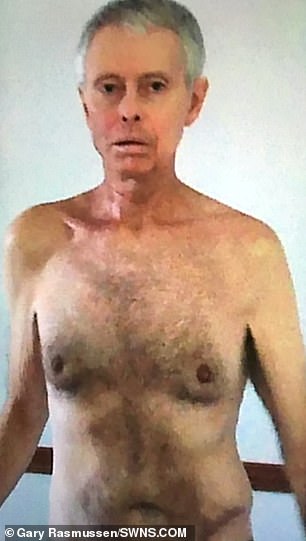 Mr Rasmussen is pictured after an 14-hour operation that left him unable to swallow, with an almost complete loss of hearing

‘Then it didn’t go away and I went to see a GP and the GP told me that she couldn’t look in my mouth because she was not a dentist.

‘I saw another dentist in that practice who said, “it’s your wisdom teeth, they need to come out”.’

His upper right wisdom tooth was removed but he was told there was ‘nothing untoward’ about his misdiagnosed malignant tumour.

His lesion was still growing and he got his lower wisdom tooth removed in August that year.

Mr Rasmussen said: ‘He took it out and pushed on the ulcer and made me scream and didn’t make any comment about that.’

In November, he saw a dentist again and insisted on being referred for a biopsy which confirmed he had mouth cancer.

He said: ‘At that particular point in time I was worried because, what else could it be? I had just had a feeling that it would be sinister.

‘I was very concerned at that point, not terrified, but certainly frightened, almost panicked then.

‘When I was referred to Kings College Hospital I was asked all sorts of questions, I was told that I would have to have probably four hours of surgery at Guy’s Hospital which ended up to be 14.

‘The effect of that has been devastating. It had started to swell underneath my jawline on the right hand side.

‘The chemotherapy, which I had for six weeks, that has a very punishing effect on the body. 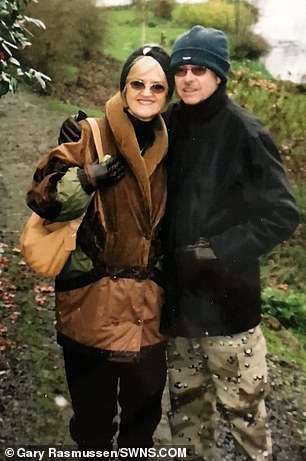 ‘The operation was reconstruction of the jawline – bone taken from the left wrist to reconstruct from the top of the ear to underneath the Adam’s Apple.

‘They call it a head and neck dissection.

‘There’s also a scar from the wrist to the inside elbow. Tissue was taken from the abdomen to cover the scars.

‘I had 88 lymph nodes which were taken out, two of which were diseased and one was extracapsular.

‘The surgeons said if you don’t get chemo-radio therapy you will lessen your chances of survival.

‘I didn’t want to go ahead with that because I’ve heard about the negative effects but was persuaded eventually by the medical people and my partner.’

Mr Rasmussen underwent some seven months of rehabilitation and operations to enlarge his throat after the operation.

He said: ‘My throat is probably about a quarter the size of a normal gullet. It means I have to virtually puree even a simple meal like a bowl of porridge – it will take me 45 minutes to eat.

‘I loved my food and wine and that’s all gone.’