‘Peaceful transfer of power is hallmark of our democracy’: George W. Bush in thinly veiled dig at Trump as he confirms attendance at Biden inauguration

Republican former US president George W. Bush will attend the inauguration of Democrats Joe Biden and Kamala Harris in Washington on January 20, his chief of staff said Tuesday.

‘President and Mrs. Bush look forward to returning to the Capitol for the swearing in of President Biden and Vice President Harris,’ Freddy Ford tweeted.

‘Witnessing the peaceful transfer of power is a hallmark of our democracy that never gets old,’ he added, in a seeming jab at President Donald Trump who refuses to concede defeat and has not confirmed if he will attend Biden’s inauguration.

It will be the eighth swearing-in ceremony the Bushs have attended, Ford said. He attended all three of his father’s inaugurations, first as vice president to Ronald Reagan, then as president, then attended his own, both of Barack Obama’s and Donald Trump’s.

After attending Trump’s he was reported to have told Hillary Clinton: ‘That was some weird s***.’

The statement from Bush, the only living former Republican president, came during a week of high political tensions in the United States, with Trump desperately scheming to reverse his election loss. 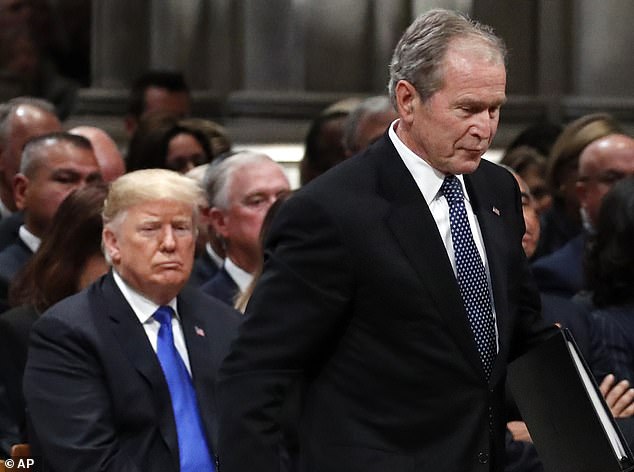 Frosty: George W. Bush will be at Joe Biden’s inauguration. He congratulated the president-elect as soon as the race was called and his spokesman issued a rebuke to Trump saying ‘watching the peaceful transition of power which is a hallmark of our democracy never gets old’

Message from Bush: The 43rd president’s spokesman issued a rebuke to Trump as he said the former first couple would attend Joe Biden’s inauguration

Vice President Mike Pence is to preside over a joint session of Congress to certify the Electoral College vote that confirmed Biden as the winner of the White House.

Trump was planning to address a rally called in protest at the certification, and he urged Pence to ‘reject fraudulently chosen electors’ – a move the vice president has no legal authority to make.

Bush called Biden on November 8, the day after US media called the election for the Democrat, to offer his ‘warm congratulations.’

At the time he said Biden was ‘a good man, who has won his opportunity to lead and unify our country.’

‘The American people can have confidence that this election was fundamentally fair, its integrity will be upheld, and its outcome is clear,’ he added in a statement then.

It marks the first time the couple, 96 and 93, will have missed the ceremonies since Carter was sworn in as the 39th president in 1977.

A spokeswoman at The Carter Center in Atlanta said the Carters have sent Biden and Vice President-elect Kamala Harris their ‘best wishes’ and ‘look forward to a successful administration.’

Biden was a young Delaware senator and Carter ally during the Georgian’s term in the White House. 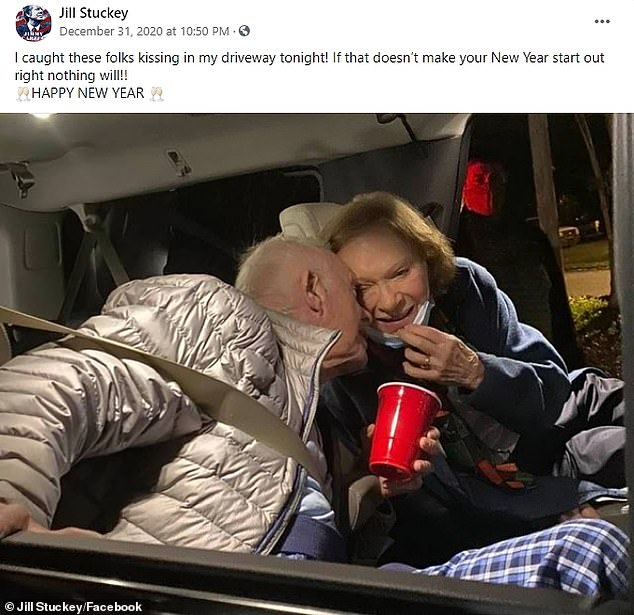 Last seen: The Carters were photographed visiting a friend in Georgia on December 31. The couple say they will not be at the Biden inauguration 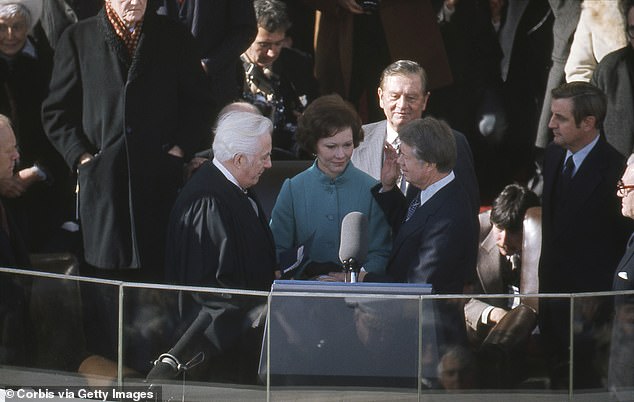 His own moment of history: Jimmy Carter was sworn in by then chief justice Warren Burger on January 20 1977 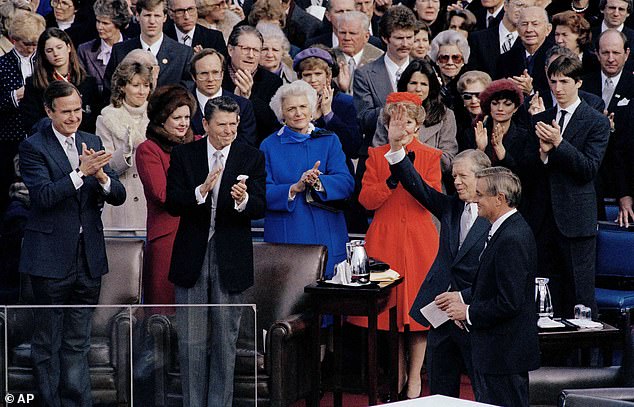 Successor: Jimmy Carter was there as Ronald Reagan was sworn in on January 20, 1981, with vice president Walter Mondale at his side 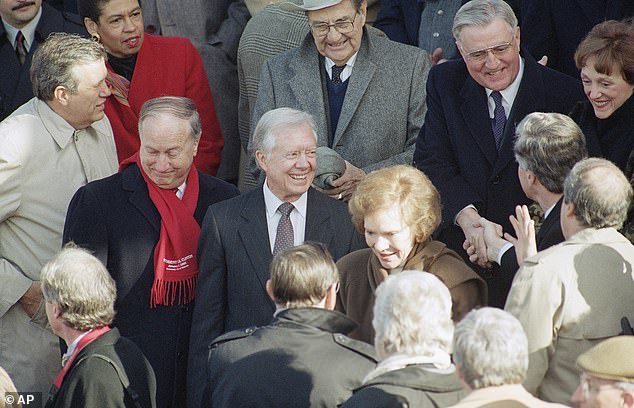 Hail to the chief: The Carters are welcomed along with Walter Mondale (top right) at Bill Clinton’s first inauguration in 1993 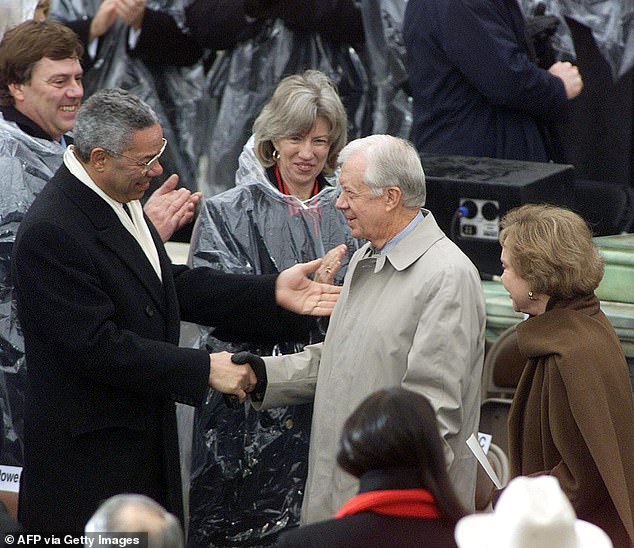 Veteran: Colin Powell, then secretary of state designate, shakes hands with Jimmy Carter at the first inauguration of George W. Bush on January 20, 2001 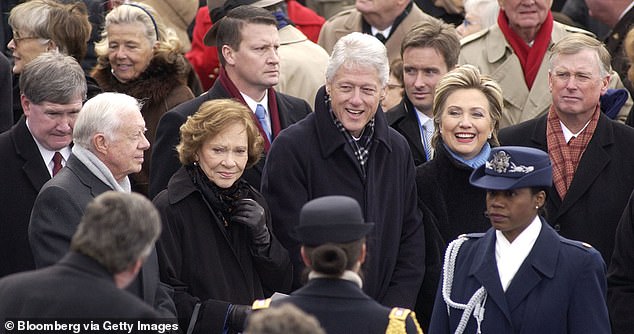 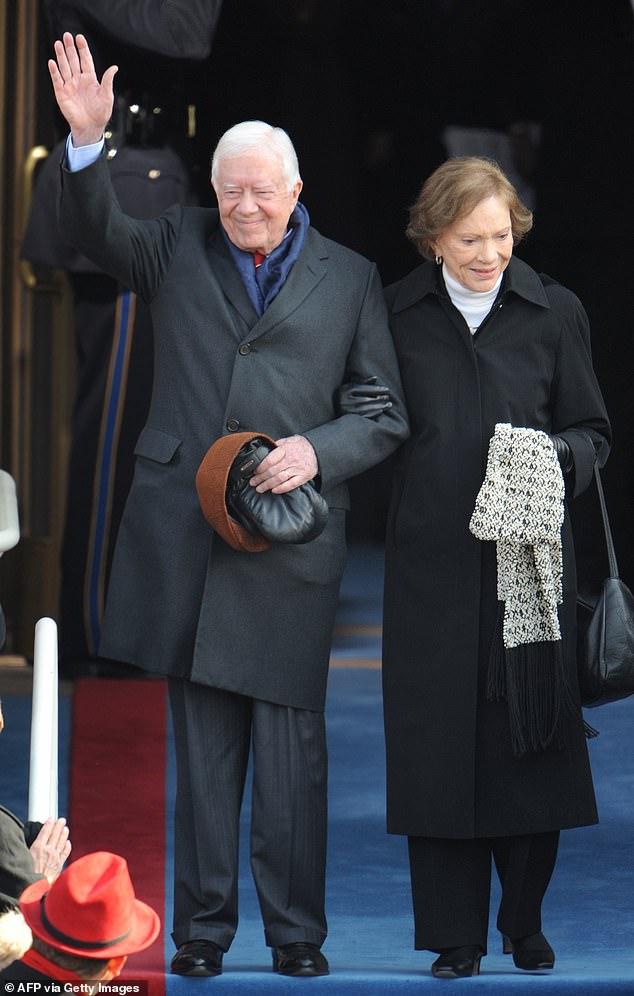 Guests of honor: Jimmy and Rosalynn Carter were welcomed at Barack Obama’s first inauguration on January 20, 2009 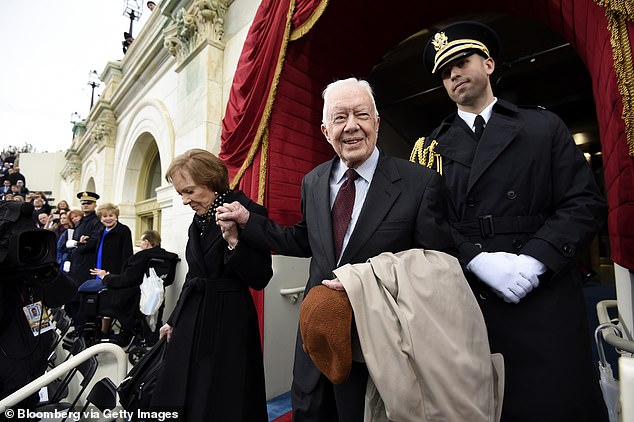 The Carters have spent the coronavirus pandemic mostly at their home in Plains, Georgia, where both were raised and where they returned after leaving the White House in 1981.

Carter, a Democrat, became the longest-lived American president in March 2019, surpassing former President George H.W. Bush, who died the previous November. Carter survived a melanoma diagnosis that spread to his brain in 2015.

He has since had several falls and hip replacement surgery.

He no longer teaches Sunday School at Maranatha Baptist Church in Plains, as he had for decades, but still participates in church activities via video amid the COVID-19 pandemic.

Carter was the first former president to confirm his plans to attend President Donald Trump’s inauguration in 2017.

The elder Bush was the lone former president at the time who did not attend Trump’s inauguration.

The Carters did travel to Washington for the elder Bush’s funeral.