BRITS were seen queuing around street corners today as they took to the polls for the most important election in a generation.

Voter turnout could play a decisive role in the outcome with rain, wind and chilly temperatures forecast for much of the country throughout the day. 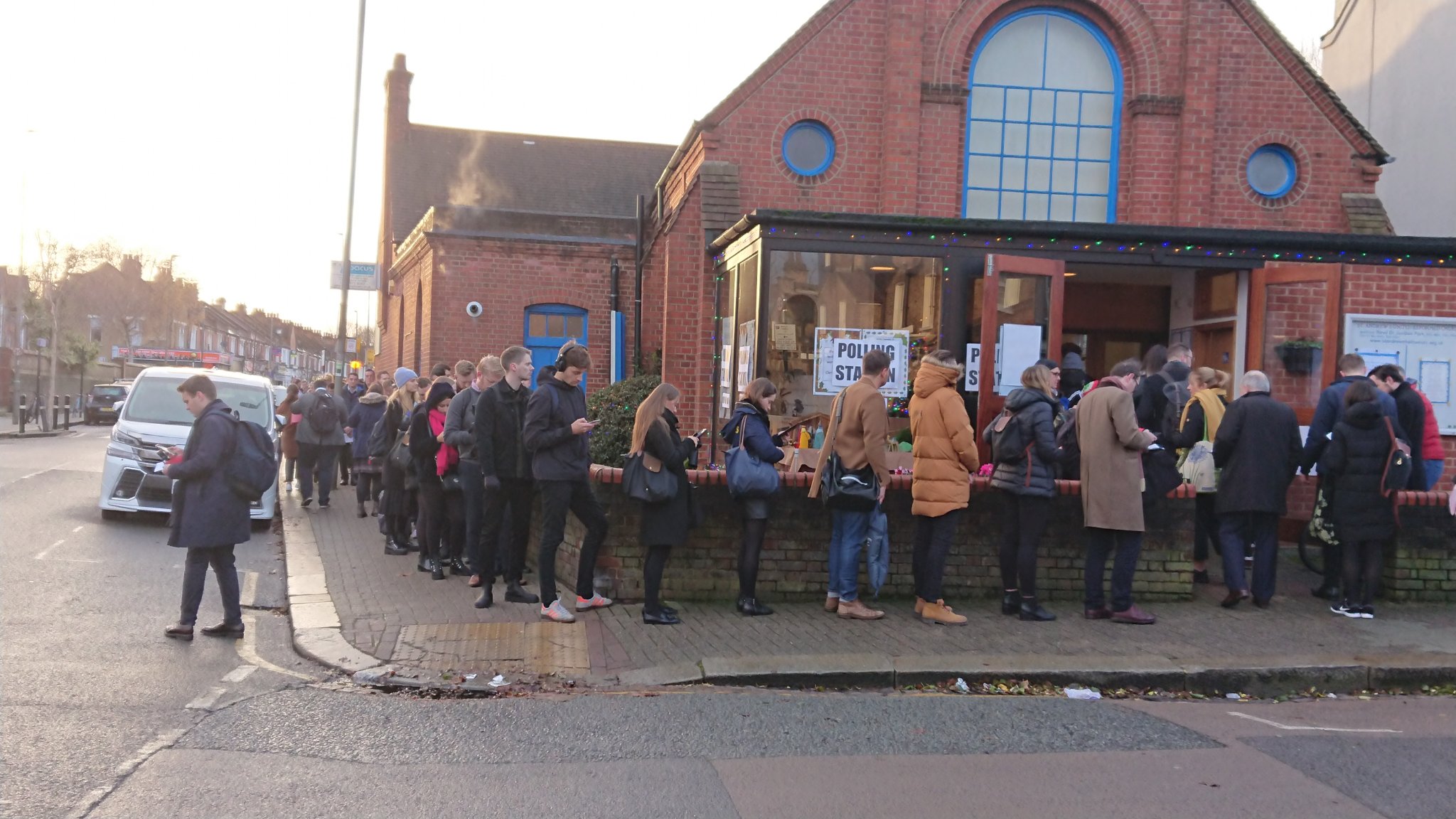 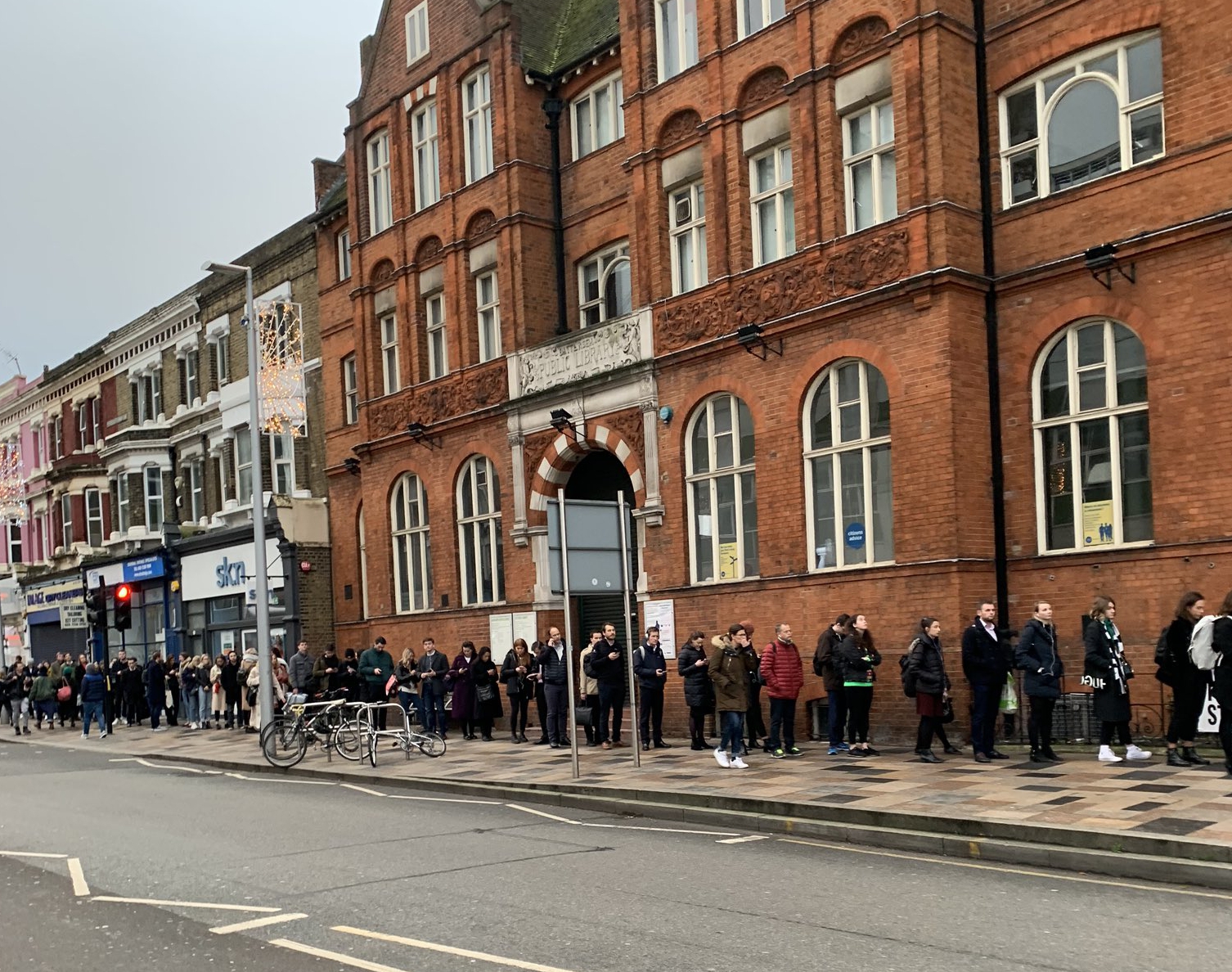 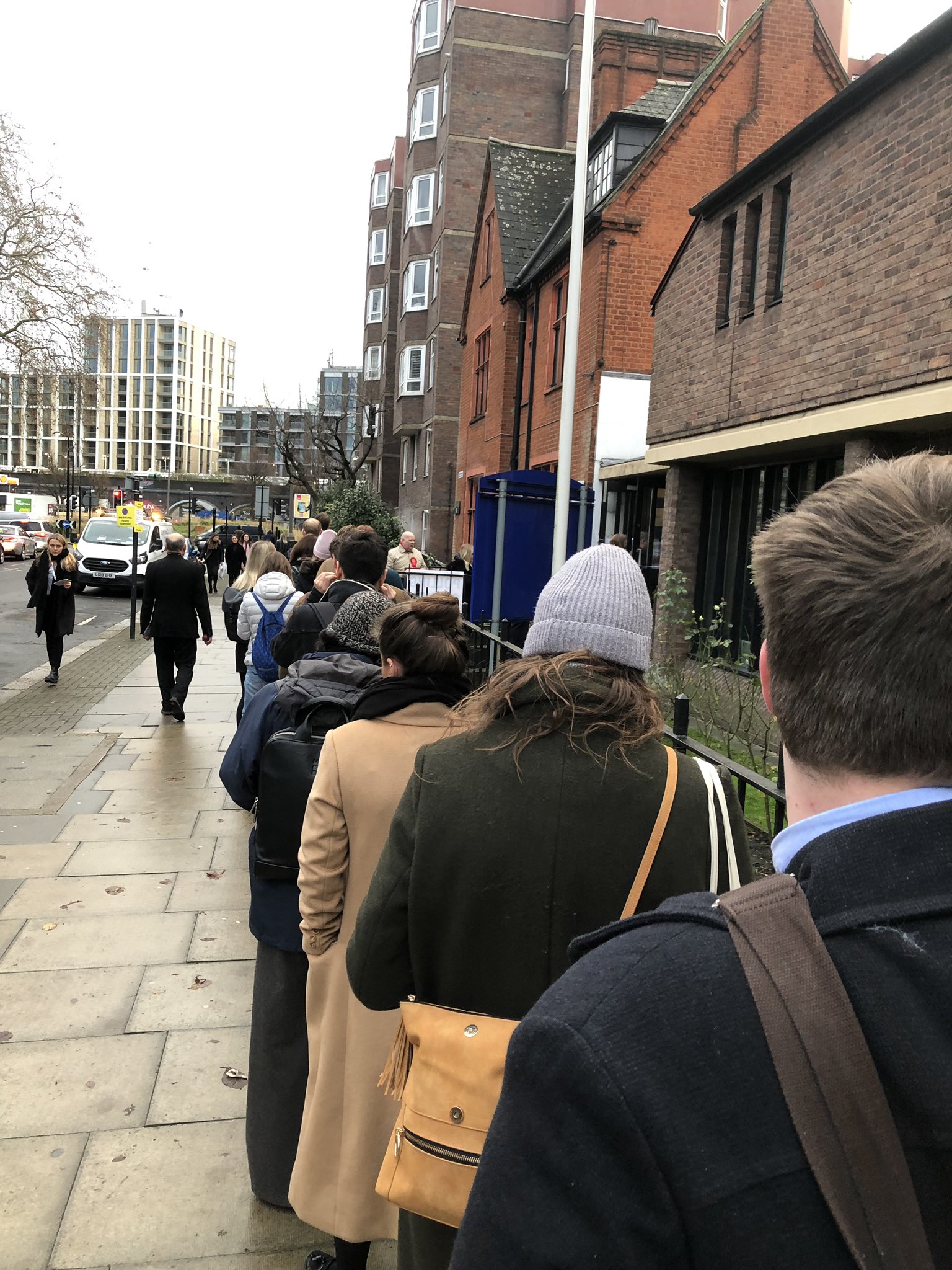 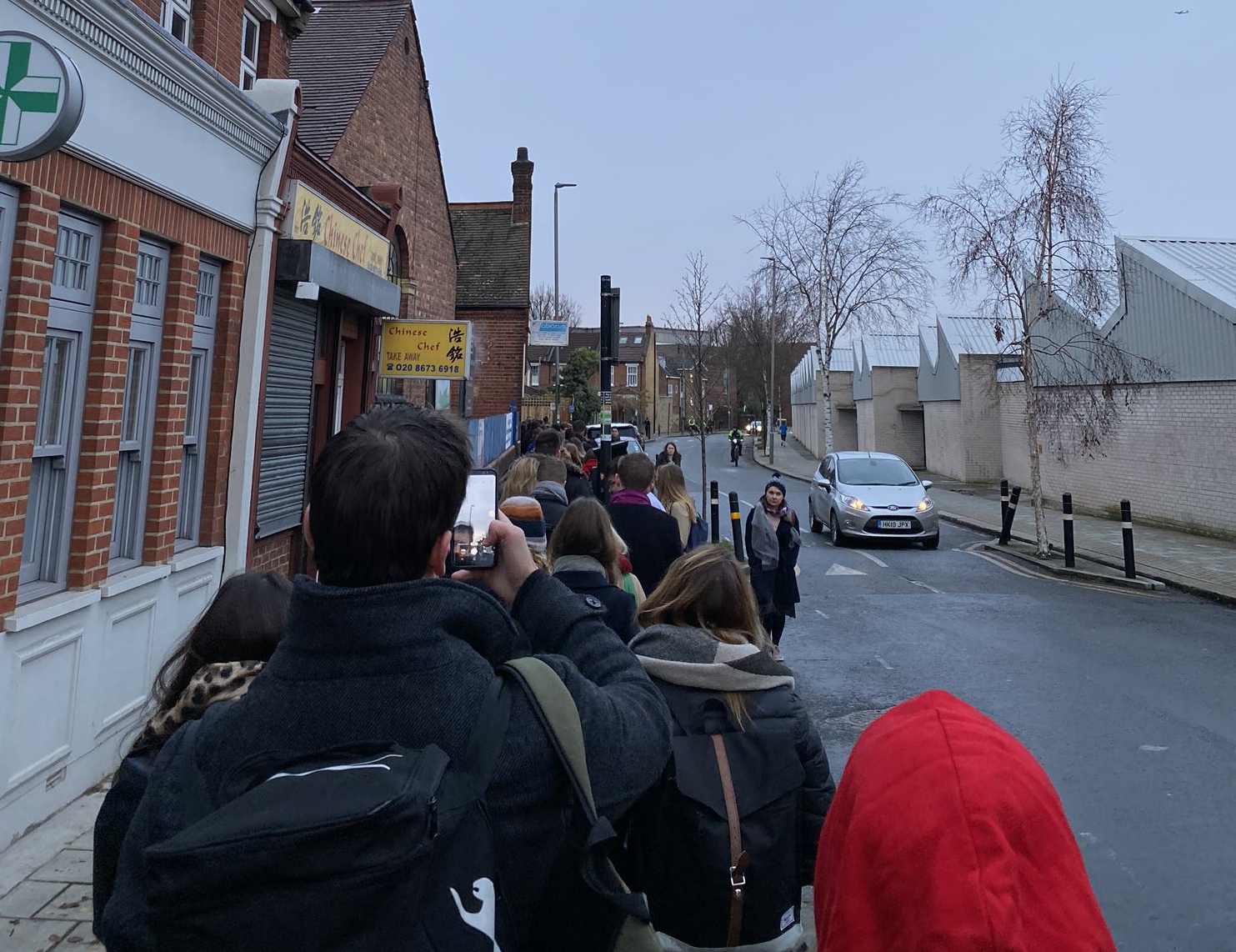 While Andrew Cleary posted a picture of hundreds of voters queuing up in Balham.

The third General Election in less than five years has been largely dominated by the 2016 vote to leave the European Union – with Labour pledging to give voters another say in a second referendum, while the Tories have vowed to take the UK out of the EU next month.

In a final plea to voters on the eve of polling day, Mr Johnson warned that the election remained on a "knife edge", but said it represented a chance to "end the gridlock".

"Today is our chance to unite as a country and put the uncertainty to bed so people can get on with their lives," he told supporters in east London.

"Just imagine how wonderful it will be to settle down to a turkey dinner this Christmas with Brexit decided – and how awful it would be if Corbyn and Sturgeon were in Downing Street advancing their plans for two more referendums.

"Let's stop the chaos and stop the referendums. We can secure a majority Conservative government if we win just nine more seats."

A poll by The Daily Telegraph and Savanta ComRes, published last night, placed the Tories five points ahead of Mr Corbyn's party – indicating the potential for a Conservative majority or a hung parliament.

But a separate poll by Kantar put the Tories on 44%, Labour on 32% and the Liberal Democrats on 13%.

Prime Minister Boris Johnson, who gambled his premiership by triggering the vote, has sought to focus on his pledge to "get Brexit done" throughout the campaign.

Labour leader Jeremy Corbyn, his rival in the race to Number 10, has instead tried to highlight his party's credentials on the health service and other domestic issues.

Mr Johnson arrived at Central Methodist Hall in Westminster at around 8.15am to cast his vote, bringing dog Dilyn along with him. Mr Corbyn is expected to vote in Islington later today. 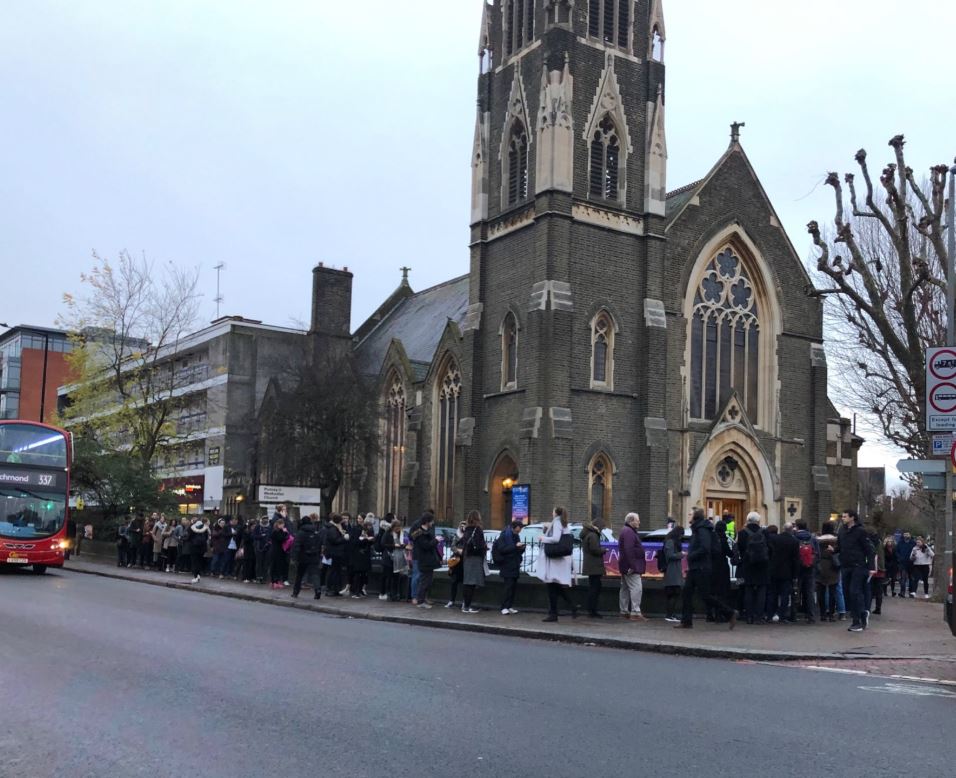 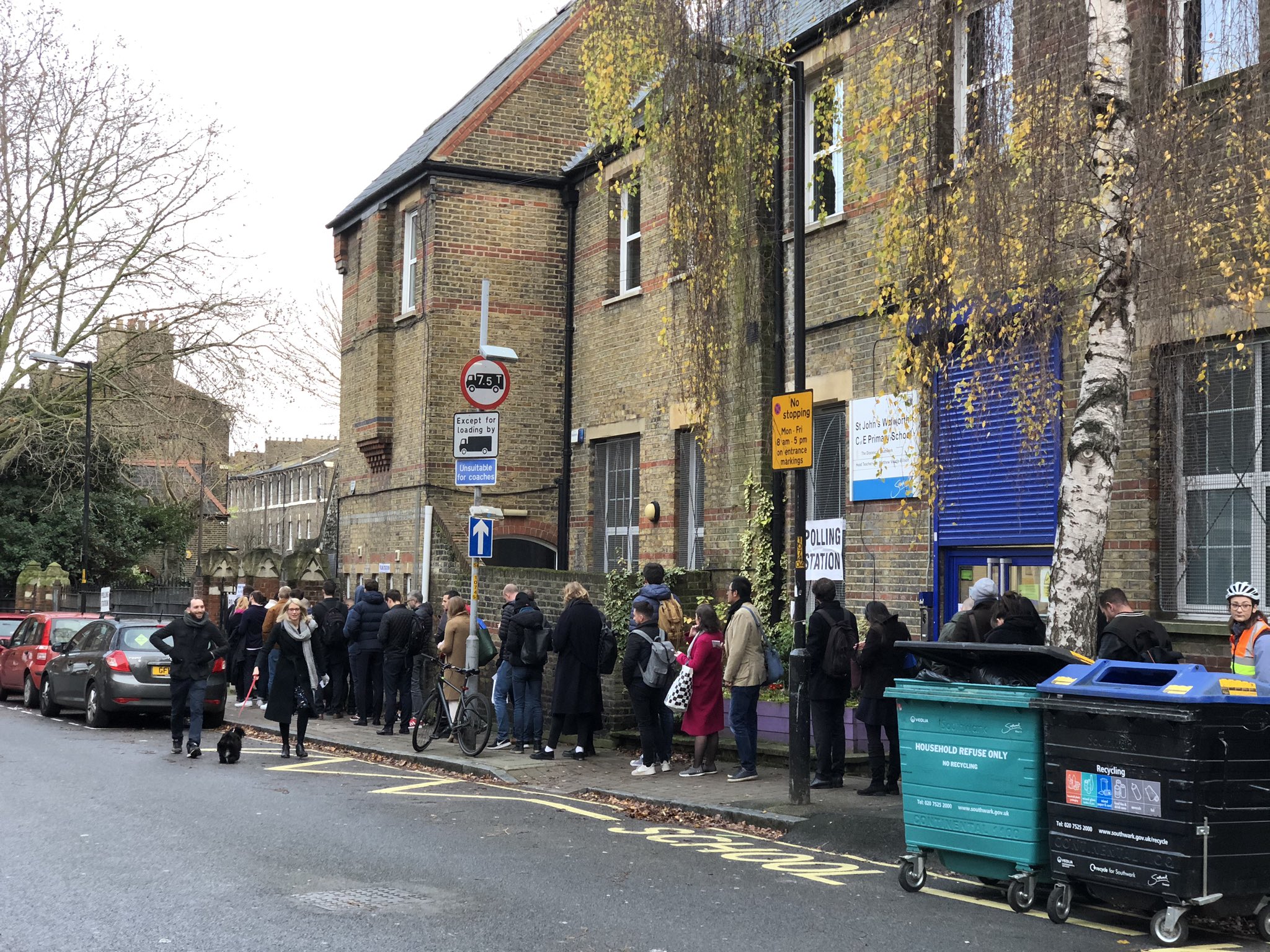 The polls have narrowed in the final week of what has largely been a tame campaign – with few gaffes and many stage-managed visits.

On Monday Mr Johnson came under fire for his alleged lack of empathy when he pocketed a journalist's phone when asked to view a photograph of a four-year-old boy who was forced to sleep on a hospital floor.

The following day, however, Labour's campaign was rocked when a member of the shadow cabinet was revealed to have poured scorn on Mr Corbyn's election chances in a leaked recording.

A terror attack on London Bridge – which echoed a similar incident in the middle of the 2017 election – briefly disrupted the campaign, but quickly turned political as the Tories and Labour exchanged blows over how to deal with such threats.

"We're literally at a fork in the road," he told the party faithful at a rally in north east London.

"So when the election comes tomorrow it is a very clear choice. You go down the road of Boris Johnson, a sweetheart deal with Donald Trump, we break off any serious relationship with Europe.

"Or you go down the Labour way, which is the adult, responsible way, of negotiating a settlement which we will all live by, and I will make sure is carried out in a future relationship with Europe.

"But we also go down the road of investing in our country, investing to end austerity and redistributing wealth and power in our society in a way that's never been seen before."

"We know from past elections that, very often, voters who vote tactically come to that conclusion in the final hours before they cast their vote," she said.

Brexit Party leader Nigel Farage, speaking in Doncaster, said he was hoping for "very, very heavy rain" in the town on Thursday, in the belief that it would depress the votes of the other parties.

"I know that people who are going to vote for us will turn out, because they absolutely believe in our message, they believe in their hearts as well as in their heads," he said.