The British teenager arrested on suspicion of making a false bomb threat on a packed easyJet plane has been hauled to court after two nights in a Spanish police cell.

Were you on board?

The 18-year-old was taken to the court in the Menorcan capital Mahon by two armed police officers this morning so he could be handed over to a judge for questioning.

The boy’s mum, said to have flown to the sunshine island after hearing about her son’s arrest on Sunday, was reportedly waiting for him at the entrance to the courtroom and was able to greet him before he was led into the building.

The unnamed teenager is thought to have been wearing the same blue shorts and green T-shirt he was arrested in when flight EZY8303 landed in Menorca after being given a Spanish military jet escort.

Reports after he was held said he could face a bill running into the thousands to cover the scrambling of the Spanish Airforce F18 fighter jet and the police operation involving the mobilisation of specialist officers and sniffer dogs to check out the aircraft. 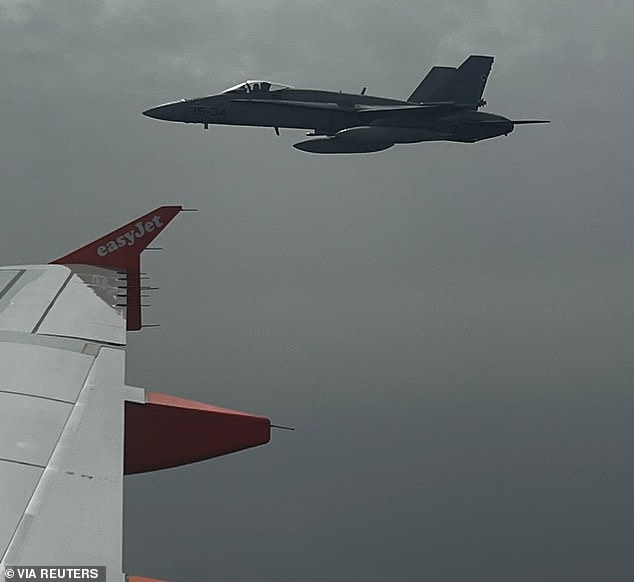 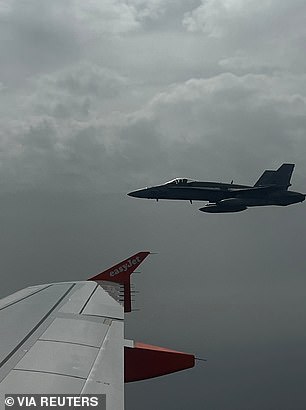 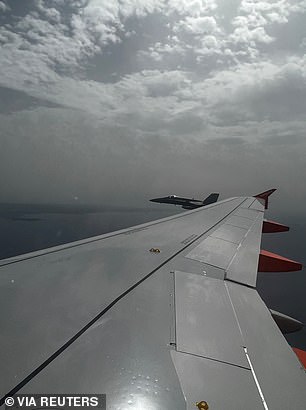 The tourist, who is believed to have been part of a group of friends who boarded the Gatwick flight, now faces a potential fine worth thousands

The youngster was part of a group of friends who had travelled to the Mediterranean holiday island for a celebration.

The alarm was sounded as the easyJet plane was near to landing just before 5pm on Sunday. Video footage showed it being escorted by the Spanish fighter jet before it reached its destination.

The Spanish Civil Guard has not yet commented on the claim.

A spokesman for the Civil Guard confirmed on Monday, before it handed the teenager over to a judge after he was forced to swap his holiday accommodation for two nights in a police cell: ‘The Civil Guard has arrested an 18-year-old British national as the alleged author of a public order offence in Mahon in Menorca.

‘On Sunday the control tower at Menorca Airport was alerted to a bomb threat on a plane heading from London to the island capital Mahon which was still in the air and nearing the airport. 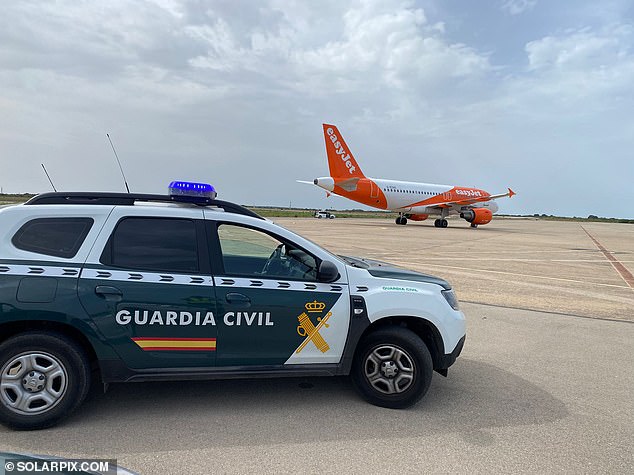 The teenager was arrested upon landing in the Mediterranean holiday island 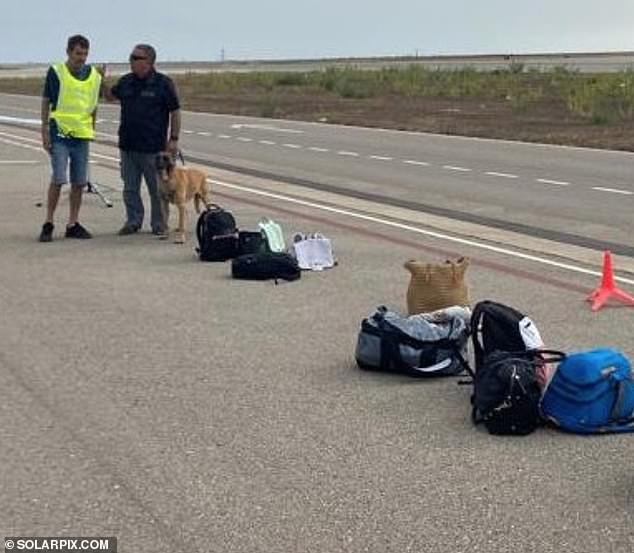 ‘The threat was said to have been sent on a social media platform.

‘Once the plane landed it was taken to an area away from the main terminal and other aircraft.

‘The Civil Guard organised a special operation which consisted of mobilising bomb disposal experts as well as sniffer dogs and other officers who created a safe perimeter around the plane.

‘The passengers were disembarked and established protocol followed until police were able to confirm it was a false bomb threat and the person responsible was identified on social media along with five other companions as witnesses.

‘They were taken to a police station so officers could clarify the situation.’

Police sources confirmed ahead of the teenager’s court appearance he was likely to have to pick up the tab for the police operation if he were convicted of any crime. Passengers were reportedly kept on the tarmac for four hours while the plane was checked out.

The easyJet plane is understood to have touched down around half an hour late at 4.45pm local time on Sunday. The incident reportedly led to a Ryanair plane leaving two and half hours late to London.

Today’s court hearing was taking place behind closed doors as is normal in Spain where only trials are held in public.

The judge is expected to decide in the coming hours whether to release the detainee on bail pending an anticipated ongoing criminal probe. Local authorities have not commented on whether he could face a speedy trial.