Britain’s ‘millionaire playgrounds’ by the sea: Sandbanks in Dorset is crowned most expensive coastal town where properties average £1M… and more than HALF of top 20 locations are in second home hotspots in West Country

Some of Britain’s most popular seaside staycation sites risk turning into ‘millionaires’ playgrounds’, with a new survey showing that South West England dominates the Top 10 most expensive coastal towns as house prices continue to run wild.

Sandbanks in Dorset, whose golden sandy beaches and proximity to Poole Harbour have earned it a reputation as a ‘playground’ for wealthy Britons, has once again been named the UK’s most pricey seaside town, with average prices edging close to £1million.

Properties in the picturesque peninsula resort near Bournemouth now sell on average for an eyewatering £929,187, according to Halifax’s annual seaside towns review, which tracks house price movements in nearly 200 locations across Britain.

New figures from the Office for National Statistics (ONS) shows that average house prices across the whole of the UK increased by more than 10% to £277,000 in the year to February 2022, and that the South West and East of England the regions with the highest annual house price growth, with average prices increasing by 12.5% in the same period.

And research by estate agent comparison site GetAgent has found that seaside towns are outperforming the rest of the market and have seen the largest annual price increase of 13.2% – meaning they are performing better than market towns and historic towns.

Seaside homes are more popular than ever, with figures showing demand for coastal properties more than doubling since pre-Covid. The outbreak of the virus and the WFH revolution caused many Londoners to leave the capital and seek clearer air. And while many of them returned to London, others have since sought out seaside or rural homes. 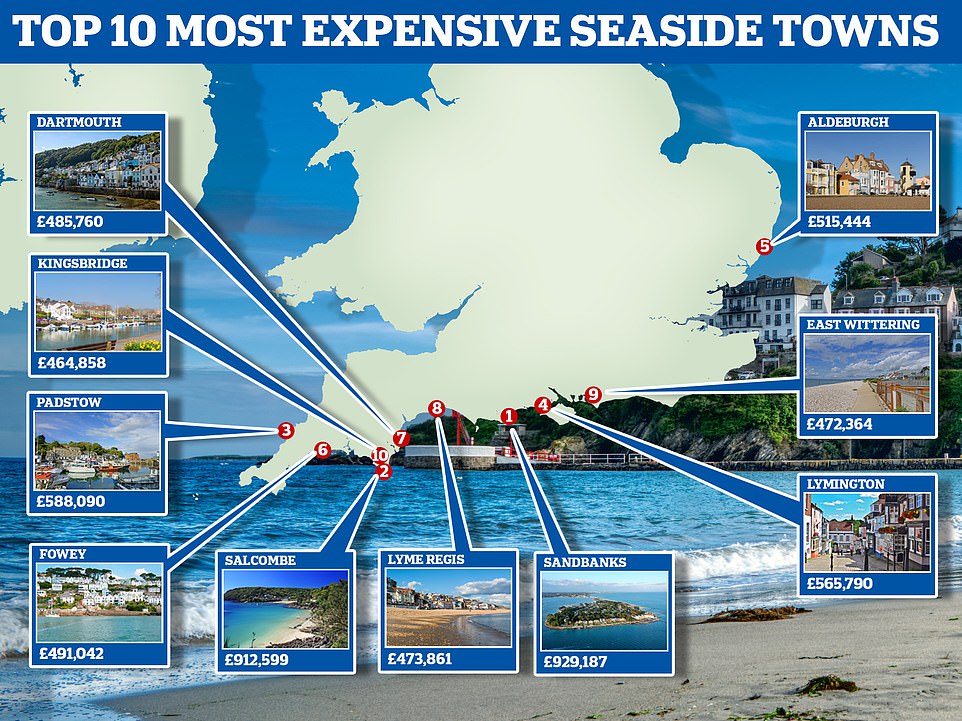 Sandbanks in Dorset has once again been named the UK’s most pricey seaside town, with average prices in the beach resort edging close to £1million. Other expensive coastal hotspots include Padstow in Cornwall (£588,090), Lymington near the New Forest (£565,790) and Aldeburgh in Suffolk (£515,444) 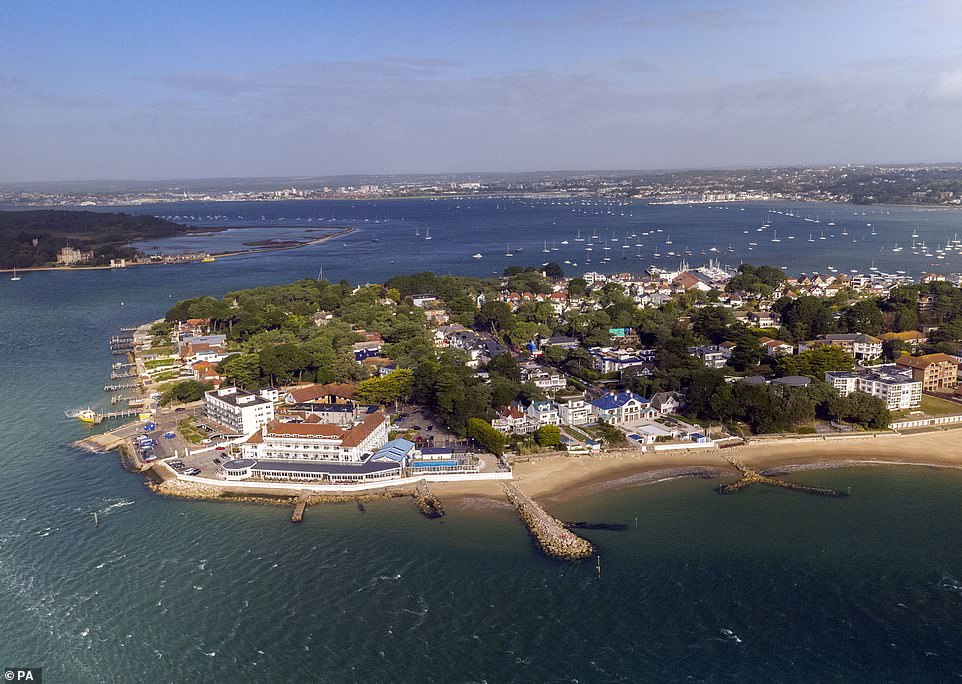 File photo dated October 4, 2019 of an aerial view of Sandbanks, Poole, in Dorset 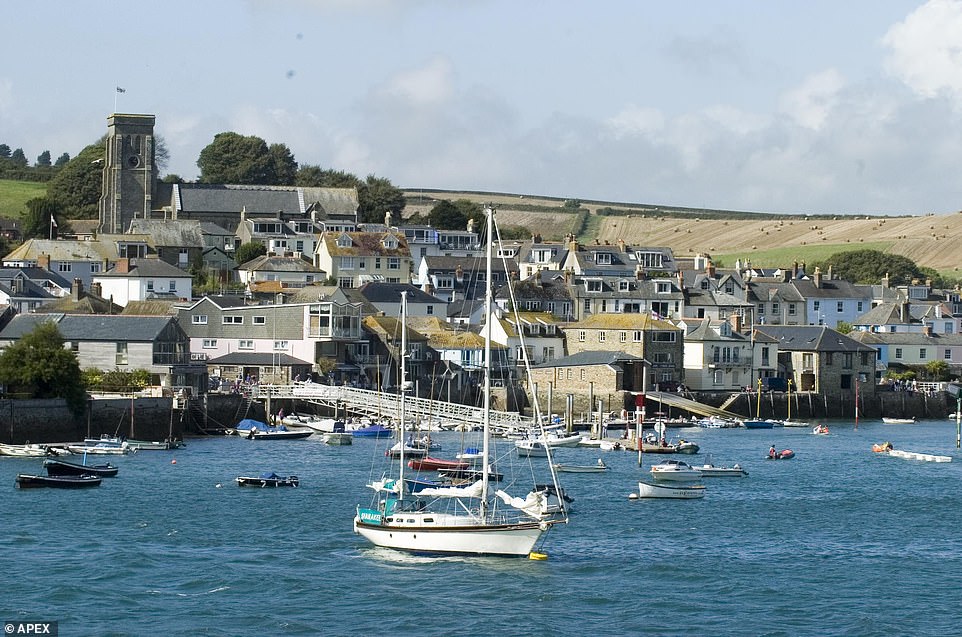 Pictured is Salcombe in Devon, which is one of the most expensive seaside towns in the UK, according to Halifax 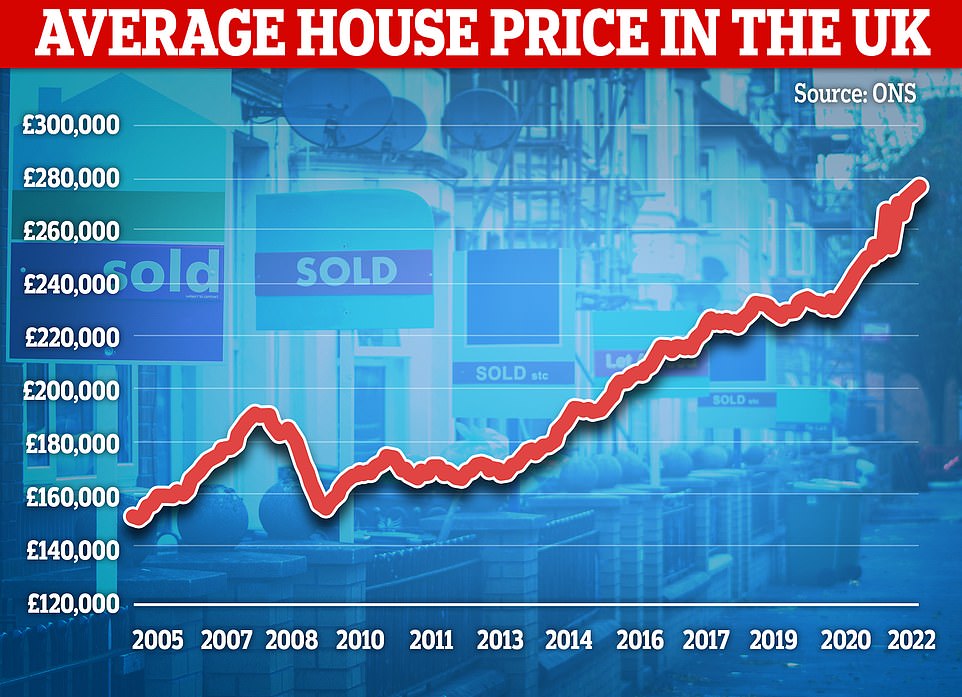 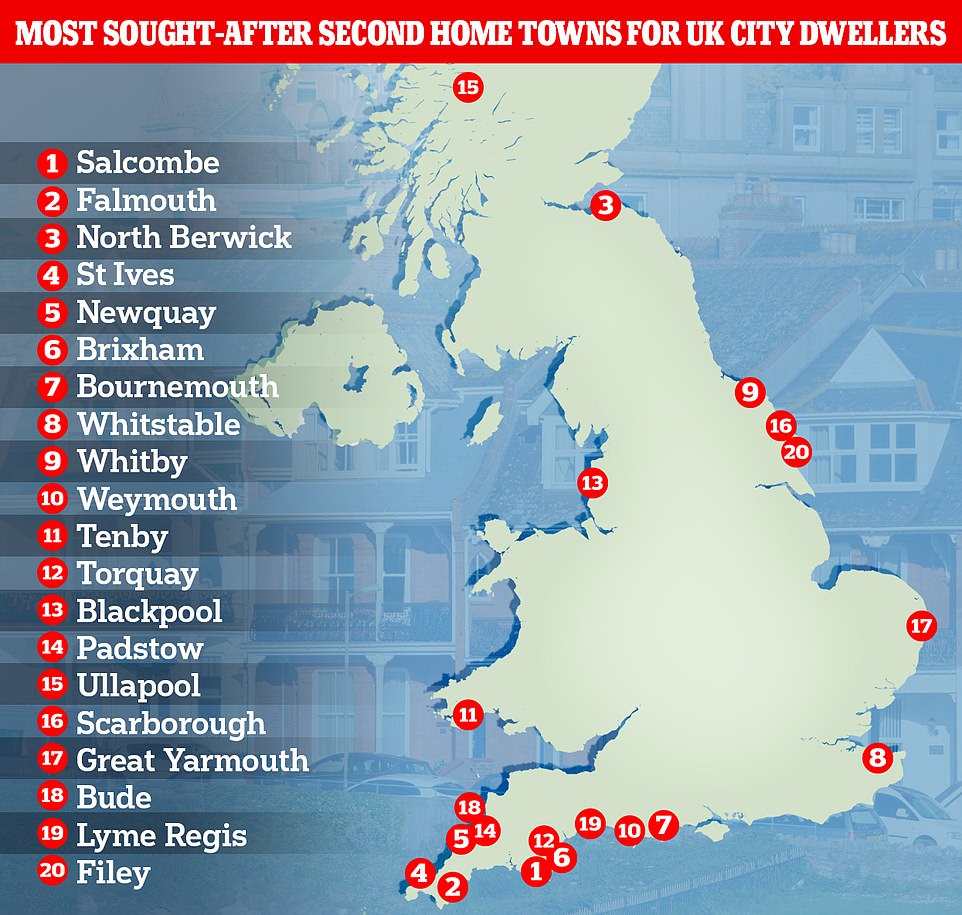 This map shows the most sought-after second home towns in the UK among city dwellers, according to research by Lakeshore Leisure Group. Top of their list is Salcombe, followed by Falmouth, North Berwick and St Ives

This is NOT Chelsea-on-Sea: Seaside locals rage at rich Londoners pricing THEM out of housing market

Furious residents of some of Britain’s most picturesque seaside towns have slammed wealthy Londoners for snapping up second homes in the area during the pandemic and pricing them out of the housing market.

Covid lockdowns and the rise of flexible working saw a surge of Londoners travelling outside of the capital, spending a record £54.9bn on properties outside the city last year – the highest value on record by far.

However, the rush for second homes has brought misery to residents of the most popular towns, with soaring house values pricing young people out of the housing market.

Now, with wealthy Londoners firing up their Chelsea tractors and preparing to descend on their holiday getaways, more residents have shared their fury and called for curbs to protect property for locals.

Meg Ennis, 70, who has lived in North Berwick, a town popular with tourists in East Lothian, since 1970, said: ‘People have rediscovered North Berwick. There’s not so many bed and breakfasts and loads more Airbnbs. Tourists have always come here.

‘Parking is diabolical here, it’s terrible. They’ve not got enough places to park. During the first lockdown people were coming down for the day when there were no toilets open. They were parking on double yellow lines, traffic couldn’t get through, it was a bit of a disgrace to be quite honest.

‘A lot of homes here are holiday homes and the youngsters can’t afford to pay the prices so they have to move away even though they were born and brought up here.’

‘Homes on the coast have long attracted a premium price, and this was no different in 2021, with the move towards working from home being an ongoing influence is where people choose to live.

‘The average seaside home cost £287,087, up eight per cent on the previous year. Whether it’s a lifestyle sought, the scenery or the sea air, when it comes to buying homes; we really do love to be beside the seaside.

‘The biggest beneficiary of that desire last year was Millport on the Scottish island of Great Cumbrae, and over the last 5 years it was Port Bannatyne on the Isle of Bute.

‘The seaside towns that attract the highest prices overall are dominated by locations across the south coast, with Sandbanks in Dorset taking the title of most expensive seaside town from last year’s winner, Salcombe in Devon. Both towns have average house prices of over £900,000.’

Founder and CEO of GetAgent.co.uk, Colby Short, added: ‘While the worst of the pandemic is hopefully behind us, its influence on the property market still remains, with seaside and market towns, in particular, remaining incredibly popular amongst homebuyers who have come to value the slower pace of life and benefits associated with more rural and coastal locations.’

Second homes and holiday lets in the South West are the most popular, with Salcombe, Falmouth, St Ives, Brixham and Newquay all within the top six in demand, according to a study by Lakeshore Leisure Group.

However, there are also fears about the impact of staycationers over the Easter weekend, with thousands of Brits planning to stay in the UK amid chaos at the airports.

The huge influx of visitors to the seaside and mountains of North Wales led to a warning from health chiefs.

Betsi Cadwaladr University Health Board said there was ‘unprecedented demand’ across the whole health and care system in North Wales.

At MacDonalds touring park near Padstow, Cornwall, manager Lisa Vickery said: ‘We have had so many last minute bookings.

‘I just think people don’t want to go through the politics of the airports and have just an easy holiday. 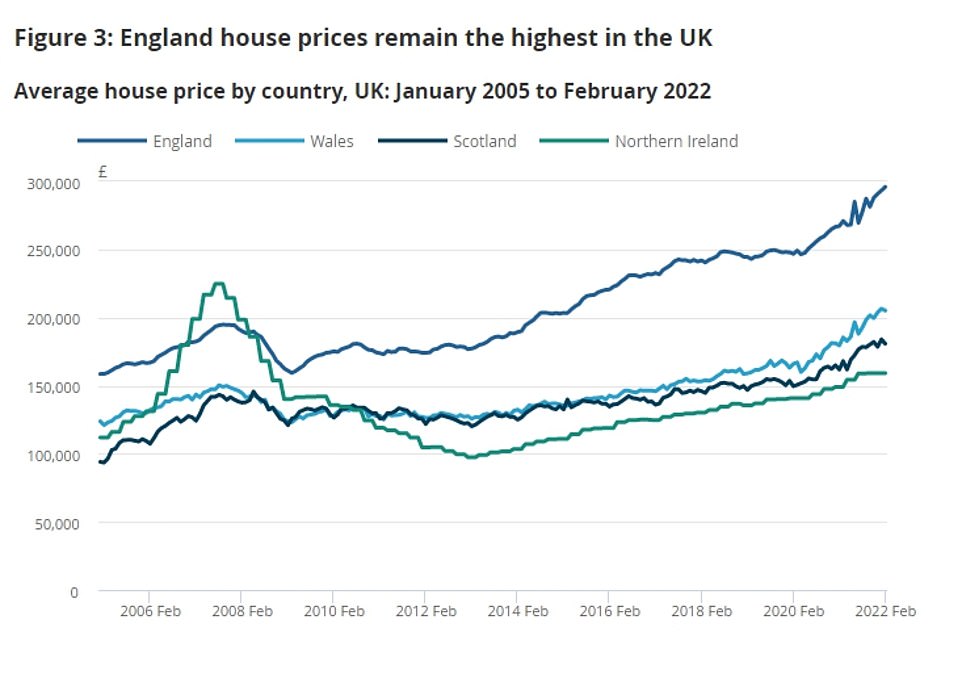 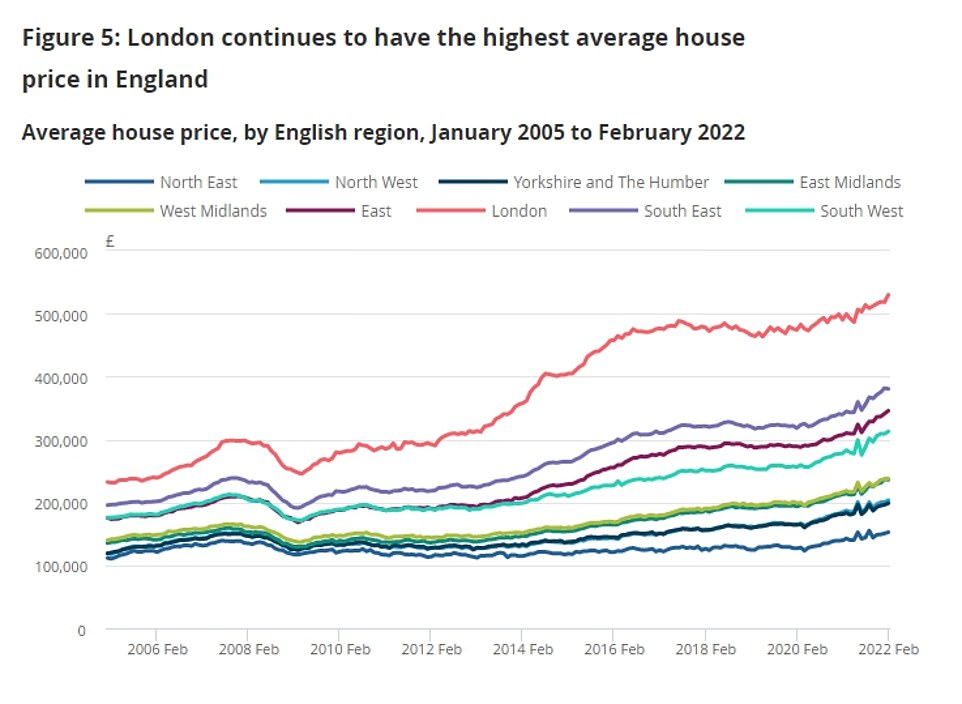 Another ONS graph shows how London continues to have the highest average house price in England, followed by the South East and East, the South West, the West Midlands and East Midlands, then the North

‘We have 250 people on site but that will go up to around 400 people over the weekend. We have seen a lot of people walk in through the doors over the last three days and it feels good to have people back.’

Linda Dewhurst, owner of the Dornafield Touring Park at Newton Abbot, Devon, said: ‘It has been a bit of a slow start for us because we opened quite early. We have a busy Easter and that sets the tone going forward for the rest of the season.’

Tourists staying at the site said: ‘Staycation obviously – we are just not going to risk an airport or a boat at the moment to get across the Channel. It’s just horrendous. I was down in Kent yesterday and the amount of leisure traffic going to the ports was like nothing I had ever seen.’

Another man said: ‘It’s local, no hassle with any of the airports and four hour queues at the airports, just keeping it local really.’