Boy genius, 11, is given an IQ of 162 after scoring maximum marks on his Mensa test ranking him among the smartest people in the world – and cleverer than Albert Einstein

A boy genius, 11, has scored 162 on his IQ test, the maximum marks possible and higher than Albert Einstein.

Aryan Kheterpal, from Watford, was stunned by his score and visited Barcelona with his parents to celebrate.

The little genius, who attends Queen Elizabeth’s School in Barnet, was also awarded gold and silver certificates for the national Primary Mathematics Challenge in years five and six.

Most people score between 85 and 115 points, while only two per cent of the world population get above 130.

Albert Einstein was believed to have an IQ of 160, although this is sometimes debated. 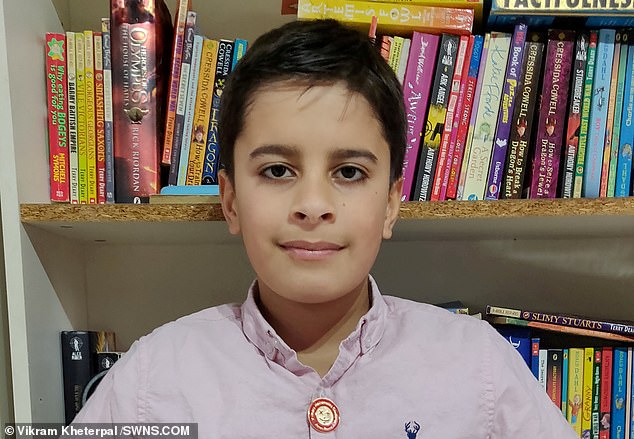 Aryan Kheterpal, an 11-year-old boy from Watford has scored the highest possible score on his Mensa IQ test

Aryan said: ‘I am good in problem solving and puzzles, but never tested my IQ before, so when I got the 162 score in Mensa, I was over the moon, also my parents couldn’t believe my score.

‘My parents rewarded me with a trip to Barcelona as I enjoy beaches and the sun. At the same time, it was a pleasure to explore Gaudi’s architecture.

‘I always felt that I have a lot of interest and inclination towards mathematics, so was quite delighted when I finally got gold in the PMC.’

Other geniuses with extraordinarily high IQs

Child prodigy Ainan Cowley, 20, from Singapore is believed to have an IQ of 263.

At the age of nine, he was able to recite pi to 518 decimal places and could remember the periodic table.

Marilyn vos Savant, 73, from St Louis, Missouri has an IQ of 228, which was a Guiness World Record at the time.

She answers questions and solves puzzles from readers in a regular column.

Nathan Leopold had an IQ of 200 and spoke nine languages by age 18.

In 1924, he was jailed after trying to commit the ‘perfect crime.’ Leopold spent 33 years in jail before being released on parole. He died in 1971.

American physician Sho Yano has an IQ of 200.

He started college at nine and earned an MD and PhD by the time he was 21.

He has a black belt in tae kwon do and started composing music when he was four, but he’s put his focus on child neurology.

Mr Vikram Kheterpal, Aryan’s father said: ‘We as parents are quite delighted by his achievements at such a young age.

‘We asked him a few times what he would like to become in life, and he says either trader or stockbroker, but it is still too early to say though.

‘I feel really proud. It started as I just bought books for him and I could see he really enjoyed it, so we kept buying more, but I never asked him to read.’

On top of his trip to Barcelona, his parents have agreed to buy him his first ever smartphone.

Aryan joins Anushka Dixit in the IQ hall of fame.

Anushka said: ‘It was not very difficult, just slightly difficult.

‘It was only the time pressure that was difficult. One part was 28 questions in four minutes.’

IQ, which stands for Intelligence Coefficient, is designed to measure someone’s reasoning and problem solving abilities.