A FIVE-year-old boy in Uganda has died of Ebola in the first cross-border case during the current outbreak, a health official said.

The youngster was being treated in an isolated unit after testing positive for the killer virus on Monday but passed away last night. 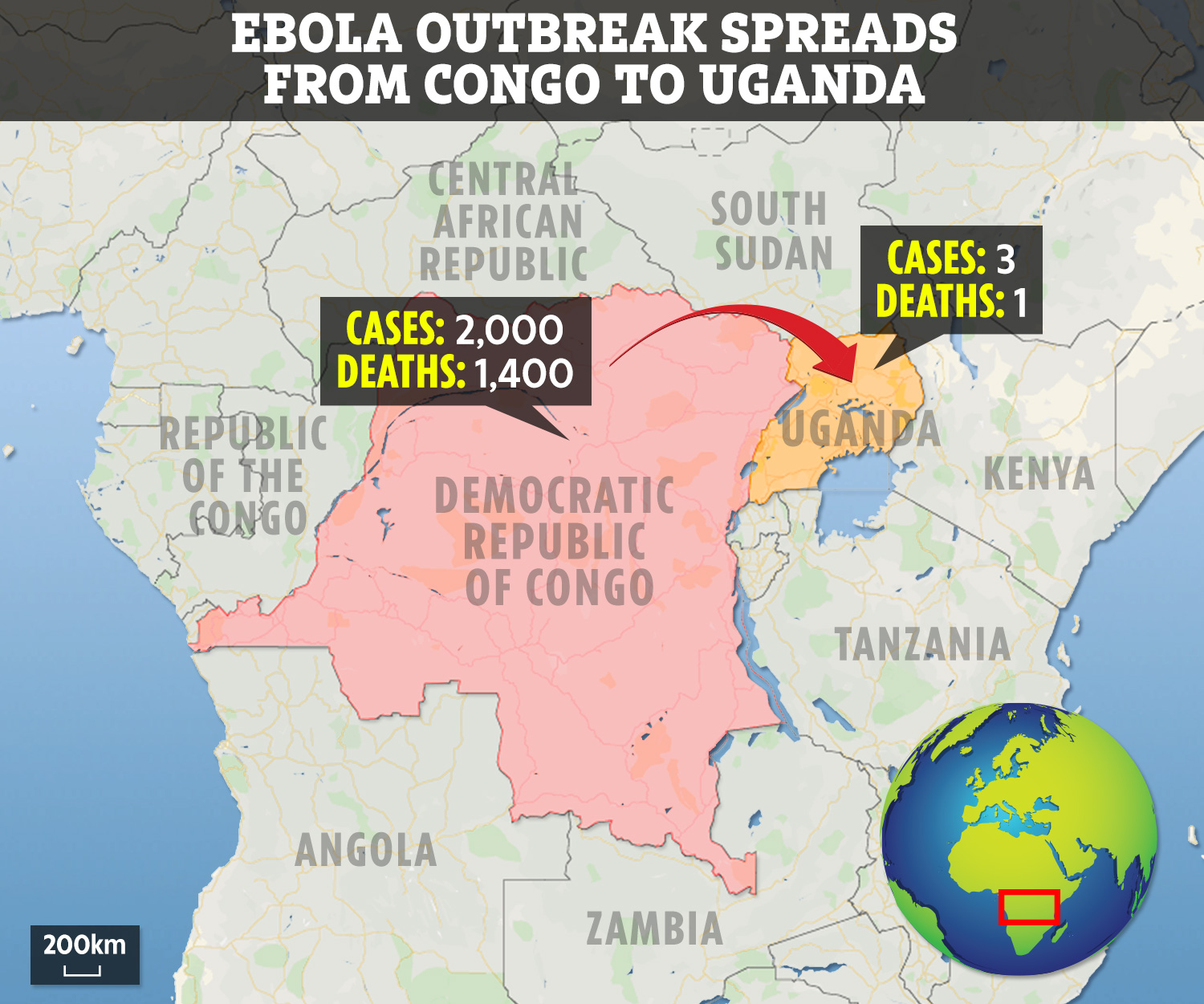 The World Health Organisation said two more people have since tested positive for the Ebola virus.

These are the first cross-border cases in the country since an outbreak started in neighbouring Democratic Republic of Congo last year.

There have been more than 2,000 confirmed and probable cases in Congo since August, with nearly 1,400 deaths.

The boy is said to have travelled across the border with four family members, including his mother and father, on Monday.

They had returned to Congo to see his maternal grandfather before he died of Ebola, Uganda's Health Minister Jane Ruth Aceng said.

He was taken to hospital near the border in Uganda after he started showing symptoms, including vomiting blood, officials said.

The diagnosis of Ebola was confirmed by the Uganda Virus Institute (UVRI) yesterday.

A rapid response team was sent to identify other people who may be at risk, the WHO said.

The boy's Congolese grandmother, who travelled to Uganda with the rest of the family, is sick although Ebola test results are yet to come in, it's reported.

Congo's health ministry said a dozen members of the boy's family had showed symptoms of Ebola and were put in isolation.

But six managed to leave while awaiting transfer to an Ebola treatment centre.

Officials claim the Congolese family likely did not pass through official border points, where health workers screen all travellers for a high temperature and isolate those who show signs of illness.

Henry Mwebesa, the national director of health services, said the child's mother, who is married to a Ugandan, "knows where to pass. She does not have to go through the official border points."

Experts have long feared Ebola could spread to neighbouring countries because of rebel attacks and community resistance hampering virus containment work in eastern Congo, one of the world's most turbulent regions.

The virus can spread quickly via close contact with bodily fluids of those infected and can be fatal in up to 90 per cent of cases.

But Mr Mwebesa said Ugandan health teams "are not panicking," adding: "We have all the contingencies to contain this case. It is not going to go beyond the patient's family."

Since the epidemic began in August in eastern Congo, the Congo health ministry said on Monday that it had recorded 2,062 cases including 1,390 deaths.

Uganda has suffered regular outbreaks of Ebola and Marburg over the years, both high-fatality viral haemorrhagic fevers, and health facilities to treat the diseases are relatively robust for the region.

But Uganda is more stable than eastern Congo, and for the first time an experimental but effective Ebola vaccine is being widely used.

But Ebola has been especially feared in Uganda, where multiple outbreaks have occurred over the years.

What is Ebola and where did it come from?

The Ebola virus disease – previously called Ebola haemorrhagic fever – is a viral infection that occurs in humans and primates.

The virus is part of the Filoviridae family, which also includes Marburg virus.

It was first detected in regions close to the River Ebola, which gave the disease its name.

To date, scientists have identified five strains of Ebola – four of which are known to cause disease in humans.

The natural reservoir – or host of the virus – is thought to be the fruit bat.

Non-human primates are a secondary host, and like humans develop fatal symptoms, so are unlikely to be the reservoir.

In spite of the epidemic that swept West Africa from 2013 to 2015, scientists class Ebola as a virus that has a relatively low infection rate.

During that, the most recent and widespread outbreak, one Ebola patient would typically pass the disease on to another two people.

That is compared with a disease like measles where one case can often lead to 18 new infections.

The Ebola virus was first identified by a team of scientists in what was then called Zaire, now known as Democratic Republic of the Congo, in 1976.

Until the last outbreak, the most widespread and deadliest ever, records show regular bursts of Ebola virus did occur.

However, they tended to be confined to villages close to rainforests in Central and West Africa.

Infection has been recorded in humans through contact with infected chimpanzees, gorillas, fruit bats, monkeys, forest antelope and porcupines.

An outbreak in the north in 2000 infected 425 people and killed more than half of them.

The announcement of the first cross-border case puts new pressure on WHO to declare the Ebola outbreak a global health emergency.

A WHO expert committee has twice decided that the outbreak, while of "deep concern," is not yet a global health emergency .

Dr Jeremy Farrar, Director of Wellcome, said: “This epidemic is in a truly frightening phase and shows no sign of stopping anytime soon.

"There are now more deaths than any other Ebola outbreak in history, bar the West Africa Epidemic of 2013-16, and there can be no doubt that the situation could escalate towards those terrible levels.

“A step up in the national response with full international support is critical if we’re to contain the epidemic and ensure the very best protection for the communities at risk and for the health workers working to protect lives."