Rome: The Italian president has rebuked Boris Johnson's claims that, unlike Italy, the UK is a freedom-loving country where it is hard to enforce anti-virus measures, as it emerged that the Prime Minister's fiancée is holidaying on the shores of Lake Como.

Sergio Mattarella on Thursday responded to the remarks made by the Prime Minister in the House of Commons. 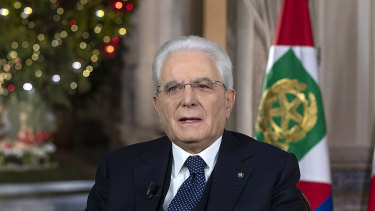 "We Italians also love freedom, but we also care about seriousness," he said.

The Prime Minister's comments were poorly received by the Italian press, which said he appeared to imply that because of Italy's Fascist past and Germany's Nazi history, Italians and Germans were more used to kowtowing to authority.

La Repubblica, a national daily, accused Johnson of "conceit" and said that he had suggested that health measures "work better for peoples of an inferior temperament Italians, for example". The PM had displayed "an Anglo-Saxon superiority complex," it said.

Corriere della Sera, another national, said Johnson appeared to be claiming that Italians were better than the British at wearing masks and washing their hands "because we had Mussolini and they had Churchill," it said in a front page comment. 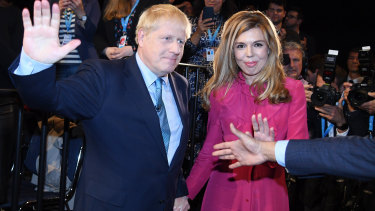 "Let me get this right the country that invented queuing and immaculate lawns is not able to obey rules? Instead, group discipline is a trait of the Italians, a people who have a well-deserved reputation for disdain for regulations and individualism verging on anarchy?"

Pictured strolling along a promenade carrying her four-month-old son in a sling, Symonds looked a million miles away from the pressures faced by the Prime Minister.

She is reportedly staying at the Grand Hotel Tremezzo, popular with wealthy tourists and Hollywood celebrities alike. A two-day stay at the luxurious hotel is rumoured to cost up to £6,400 ($11,500). 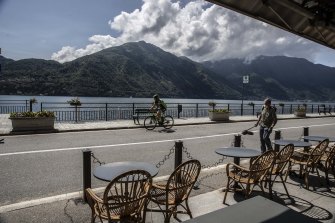 A worker walks holding a lawn mower as a biker rides past a cafe outdoor tables in Tremezzo, Lake Como, Italy.Credit:AP

Making the most of the lack of travel restrictions between the UK and Italy, Symonds, 32, and three friends opted not to wear face masks on a boat tour.

Current rules in Italy require people to wear a face mask between 6am and 6pm where there are large gatherings in pubs, bars and crowded piazzas. But those in small groups are exempt.

Our weekly newsletter will deliver expert analysis of the race to the White House from our US correspondent Matthew Knott. Coming soon. Sign up now for the Herald‘s newsletter here, The Age‘s here, Brisbane Times‘ here and WAtoday‘s here.