The PM and Chancellor Rishi Sunak have agreed temporarily to drop the pledge, which is supposed to mean payments rise by the highest out of average earnings, inflation or 2.5 per cent.

There had been warnings that the mechanism was ‘unsustainable’ after the effects of the furlough scheme and layoffs last spring warped the figures for wage rises – putting pensioners on track for an 8 per cent hike from next April.

Instead ministers are expected to switch to a new double lock system – which would cut out the wages element. As a result pensions are likely to rise 2.5 per cent. 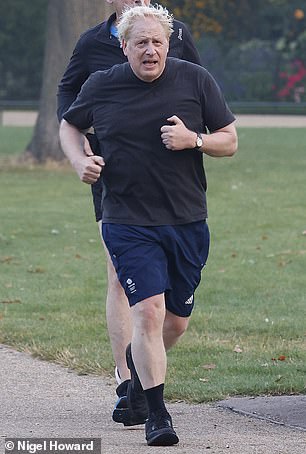 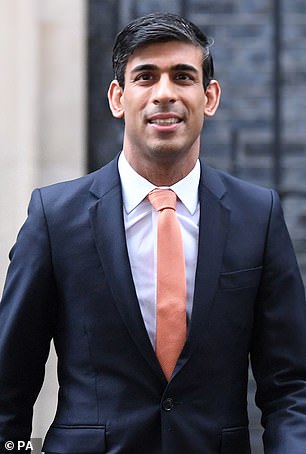 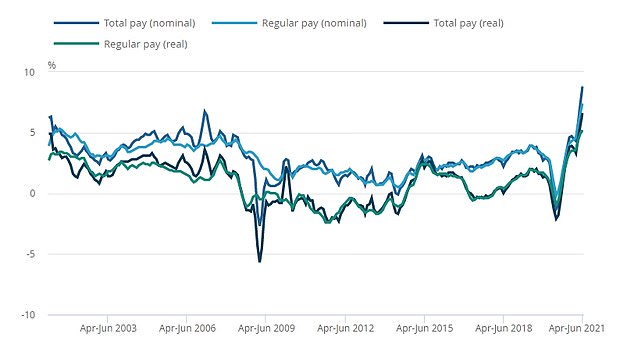 Wages also surged ahead, with total pay up 8.8 per cent in April-June, largely due to the warping effect of the pandemic on figures

The Institute for Fiscal Studies has said pensioners would receive £4 a week more with an 8 per cent increase, compared with a rise in line with underlying earnings growth of 5 per cent.

The think-tank said that giving pensioners a 5 per cent rise would increase public spending by £500million, relative to the March forecast.

But it would cost the Treasury £2.5billion a year less than if it went ahead with an 8 per cent increase.

The Chancellor has previously hinted that he would not go ahead with the large rise, saying his decision would be guided by ‘fairness both to pensioners and for taxpayers’.

The ONS has estimated that accounting for the impact of the pandemic, ‘underlying’ earnings growth is far lower at between 3.5 per cent and 4.9 per cent.

The announcement is being pushed out alongside social care reforms, with No10 hoping it will help avoid accusations that young people are unfairly shouldering the burden of extra spending.

But Labour has insisted that the triple lock should stay in place.