A man died after a rockfall on Snowdon on Christmas Eve, it has emerged.

Llanberis mountain rescue team, Britain’s busiest, were alerted during the morning by a walker on the popular Pyg Track, to the rockfall below Bwlch Y Saethau.

‘After looking through a high-powered camera lens the informant was concerned that a person may have been caught up in the fall,’ a team spokesman said. 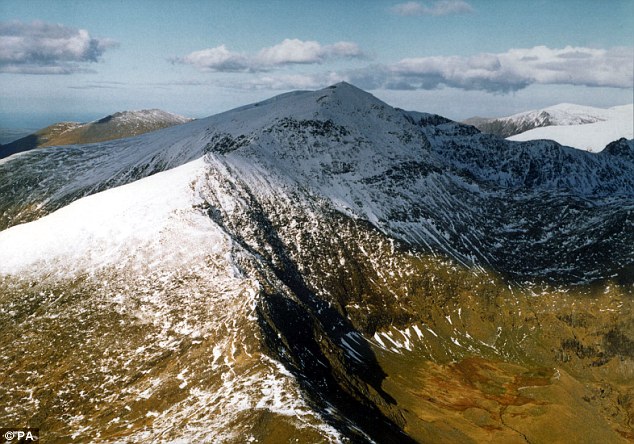 Rescuers said recovery of the body was, at times: ‘Highly technical and dangerous.’

A coastguard rescue helicopter from Caernarfon flew to the scene with a winchman paramedic but the man was found dead.

North Wales police have given no details about the tragedy.

Llanberis mountain rescue team said : ‘Our condolences go to the family and friends of the casualty, at any time a tragic incident, more-so given the time of year.’

Rescuers said recovery of the body was, at times: ‘Highly technical and dangerous.’

The news comes after two teenagers were airlifted to safety after finding themselves stranded on a notorious 3028ft high ridge on Mount Snowdon in September.

The drama unfolded after a family of five took a wrong turn on a ramble on the Welsh mountain and ended up on the east ridge of Crib Goch – a knife-edge section on the 3,560ft tall Welsh mountain.

The teenagers felt unable to navigate the ridge, which has sheer drops on either side of hundreds of feet, so the group called mountain rescue volunteers for help.

The rescue team is a fully voluntary organisation which responds to those in need on Snowdon and the surrounding mountains, and is on-call 24 hours a day, 365 days a year.

A climber died after he plunged more than 800ft from a cliff on Mount Snowdon in February.

Two people saw the male walker fall from the Snowdon Railway track and the Llanberis Mountain Rescue team were called to the notorious cliffs of Clogwyn Coch.