Washington: In the fourth year of Donald Trump's presidency, and with an election just eight weeks away, it would be foolish to expect any new development to substantially shift public opinion of the President one way or the other.

On January 1 Trump's approval rating was 42.6 per cent according to the FiveThirtyEight polling average. Since then he has been impeached by the House of Representatives and acquitted by the Senate. More than 190,000 Americans have died from the coronavirus and the unemployment rate is in double digits. Life feels utterly transformed. Trump's approval rating today? 42.7 per cent —virtually identical to the start of the year. 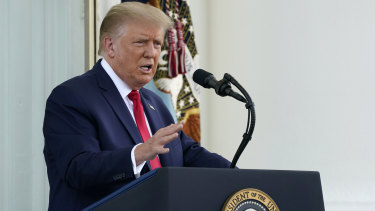 The story of Trump's presidency is that, despite the constant volatility, he has the most stable approval ratings of any president in modern history. The vast majority of Americans long ago decided how they feel about him.

Given this, it would be easy to dismiss the revelations from Bob Woodward’s new book Rage as having little consequence. But while it will almost certainly not shift a huge number of votes, the publication of the book is bad news for Trump and his election campaign.

Unlike the authors of other damning books about Trump – such his former personal lawyer Michael Cohen — Woodward is not a disgruntled former employee. He is one of the most famous and respected journalists in the country — one half of the duo that broke the Watergate story that eventually brought down Richard Nixon. When he publishes a new book, it's a blockbuster event. 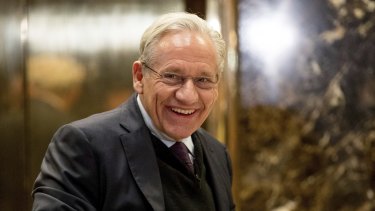 Bob Woodward arrives at Trump Tower in New York in 2017. Woodward has conducted in-depth interviews with Donald Trump for his new book ‘Rage’.Credit:AP

Crucially, his book is not based solely on unidentified sources but a series of in-depth interviews with Trump himself. Woodward recorded the interviews and has released audio of some of the President's most striking quotes. This makes the book much more difficult to dismiss than stories such as The Atlantic's recent expose, based on confidential sources, alleging that Trump had belittled dead American soldiers.

The most dramatic takeaway from the book is that, in early February, Trump was privately discussing with Woodward how serious the coronavirus was: "deadly stuff" in his words. Yet at this time Trump was publicly minimising the virus, saying it would disappear like a miracle and favourably comparing it to the seasonal flu.

"I wanted to always play it down," Trump admitted in a March interview. "I still like playing it down, because I don't want to create a panic."

Trump's main goal during the campaign is to speak about anything but his response to the pandemic. Most Americans believe Trump has done a poor job handling COVID-19, which is why he has been so eager to shift the national conversation to law and order and economic recovery.

The US daily COVID-19 death rate and case count has been trending down in recent weeks, which has been good news for Trump. Now Woodward's book has put Trump's biggest electoral weakness back in the headlines.

On Thursday (AEST) Trump unveiled a list of potential Supreme Court nominees for a second term — an important issue for conservative voters. But his announcement was blown away by the Rage news.

Democratic presidential nominee Joe Biden leapt upon the revelations, accusing Trump of committing "a life and death betrayal of the American people". He would love for the November 3 election to be a referendum on Trump's handling of the virus.

Trump is on a race against time, and any day spent defending his performance on COVID-19 is a wasted opportunity for him to claw back Biden's lead in the polls.