Former vice president Joe Biden said on Monday that he considers himself "the most qualified person in the country" to be president and that he would make a decision about moving forward with a 2020 bid in the next two months.

His comments came during a book-tour stop at the University of Montana at which Biden also acknowledged he has some liabilities, including being a "gaffe machine" but said none of those would scare him from running. 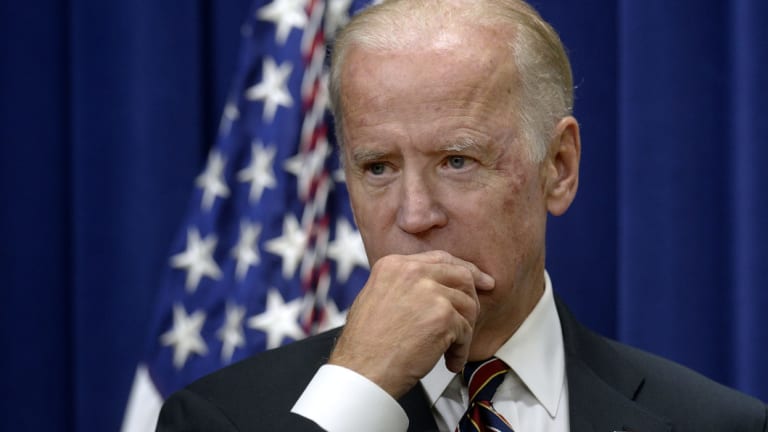 Joe Biden has been mulling a 2020 presidential run. Credit:Bloomberg

Biden, 76, would join what is expected to be a crowded field of Democrats, including several senators, looking to topple President Donald Trump.

"I'll be as straight with you as I can," Biden told TV reporters. "I think I'm the most qualified person in the country to be president. The issues that we face as a country today are the issues that have been in my wheelhouse, that I've worked on my whole life."

Those issues, he said, include "the plight of the middle class and foreign policy".

"Even my critics would acknowledge, I may not be right, but I know a great deal about it," added Biden, a former senator from Delaware.

Biden was interviewed by author and television personality Bruce Feiler, who ticked off some potential liabilities of another Biden campaign. Among them: his chairmanship of the Judiciary Committee during the Anita Hill hearings, his co-sponsorship of the 1994 crime bill that many Democrats have long since repudiated and his reputation as a "gaffe machine".

"I am a gaffe machine, but my God what a wonderful thing compared to a guy who can't tell the truth," Biden said, referring to Trump. "I'm ready to litigate all those things. The question is what kind of nation are we becoming? What are we going to do? Who are we?"

"Whether or not I run, whoever runs, I'm going to break my neck to make sure they win," he added. "We can't have four more years."

Biden said he would confer with his family in coming weeks about whether to run.

Trump has said he would welcome a challenge from Biden. During a CBS interview over the summer, the President said running against Biden would be "a dream," claiming that Barack Obama "took him out of the garbage heap" to make him his running mate in 2008.

Biden, who served as Obama's vice president, unsuccessfully sought the Democratic presidential nomination in 1988 and in 2008, both times dropping out after poor showings.

That was evidence, Trump said, that Biden "by himself could never do anything".