Washington: Joe Biden appears well-positioned to become the 46th president of the United States, even as President Donald Trump continues to falsely claim that the election is being "stolen" from him as officials count the remaining votes in several battleground states.

Biden has seized the lead in Michigan and Wisconsin, where the flow of votes continues to favour the Democratic nominee.

Democrats feel confident about their chances of clawing back Trump's lead in Pennsylvania and the traditional Republican stronghold of Georgia remains too close to call. 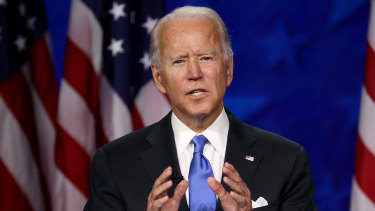 Democratic presidential nominee Joe Biden has taken the lead in the crucial states of Wisconsin and Michigan.Credit:Getty

"Joe Biden is on track to win this election and he will be the next president of the United States," Biden's campaign manager Jen O'Malley Dillon said on a briefing call on Thursday (AEST).

But Democrats' growing optimism about winning the White House has been tempered by a disappointing performance in the Senate, where they appear to have failed to won an expected majority.

Continuing Republican control of the upper chamber sets the stage for extended gridlock in Washington and will likely hamper Biden's ability to enact a bold agenda on climate change and healthcare reform. 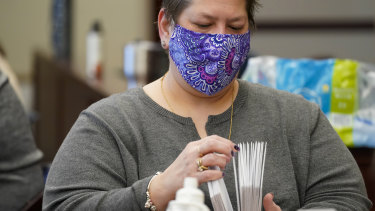 The Trump campaign announced plans to "immediately" demand a recount in Wisconsin, where Biden currently leads by around 20,000 votes or 0.6 per cent. Campaigns can request for a recount if their opponent's margin of victory in a particular state is under one per cent.

Biden currently leads Trump by almost 50,000 votes in Michigan – a margin of one per cent.

If Biden wins Michigan and Wisconsin as well as Arizona – where the Associated Press has called the race for the Democratic nominee – he will reach the required threshold of 270 Electoral College votes.

After prematurely declaring victory and threatening a Supreme Court challenge in a remarkable early morning press conference at the White House, Trump continued to sow doubt about the legitimacy of the election throughout the day on Twitter.

"They are finding Biden votes all over the place — in Pennsylvania, Wisconsin, and Michigan," he said in one tweet. "So bad for our Country!"

In another tweet he said: "Last night I was leading, often solidly, in many key States, in almost all instances Democrat run & controlled.

"Then, one by one, they started to magically disappear as surprise ballot dumps were counted. VERY STRANGE…"

Several of Trump's tweets have been flagged by Twitter for promoting misinformation about the election. Biden's emerging lead in several states is the expected result of many Democratic voters’ decision to vote early or by mail rather than on election day.

Trump retains a lead of around half a million votes in Pennsylvania but the bulk of outstanding votes will come from the Democrat-leaning cities Philadelphia and Pittsburgh.

In a call with reporters Trump campaign manager Bill Stepien said: "If we count all legally cast ballots we believe the President will win."

The Trump campaign said they would win Pennsylvania and said media outlets had been too quick to award Arizona to Biden given votes in Republican-leaning rural areas remain to be counted.

As of early afternoon in Washington, Biden leads by three per cent in Arizona with 86 per cent of the estimated vote counted.