Bank Holiday travellers face a weekend of chaos as half of drivers take to the roads and rail engineering works affect major routes.

It comes after train stations, airports and motorways were packed yesterday with people trying to make the most of the long weekend.

The AA and RAC last night warned of potential gridlock on some key motorways and major A-roads across the Bank Holiday. Network Rail also warned train passengers to check before they travel as track and signalling upgrades mean several lines will either be closed or have reduced timetables.

Tens of millions are set to be on the move over the next three days due to a bumper weekend of events. Reading and Leeds festivals began yesterday, with Notting Hill Carnival in west London starting today. 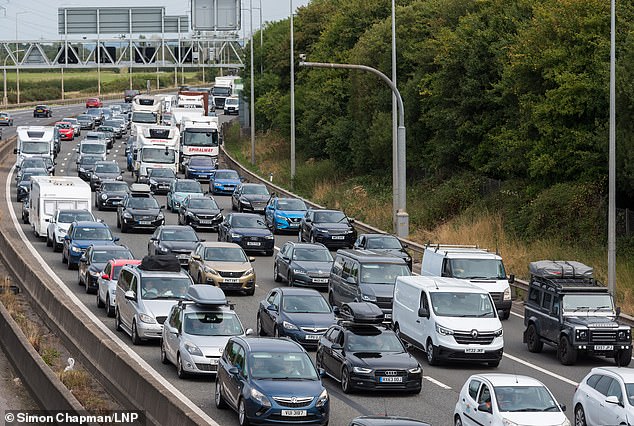 The Birmingham Weekender and Cardiff and Manchester Pride events are also taking place.

Of around 15million drivers expected to take to the roads this weekend, an estimated 4.2million set off yesterday. At least another 2.3million are expected to get in their cars today.

Yesterday, huge queues of vehicles built up travelling southbound on the M5 motorway past Bristol, and big waits met getaway traffic on the M25 near the Dartford Crossing in Kent.

It was busy too at Stansted airport train station in Essex as well as King’s Cross in central London, as many people prepared to go on holiday. Millions of families are expected to embark on ‘last hurrah’ leisure trips over the final weekend before schools return amid predictions of fine weather and high temperatures in some areas.

It came as easyJet was yesterday forced to cancel dozens of flights between the UK and Portugal over the weekend due to a ground-handlers strike there.

The budget carrier was forced to ground at least 25 flights, affecting nearly 4,000 travellers.

Figures show 900 flights have been cancelled over the Bank Holiday weekend since July 1. Meanwhile, the AA said drivers face the worst disruption on the M4 and M5 interchange near Bristol, M5 between Taunton and Exeter, M1 between the M25 and Newport Pagnell, the M6 and M42 interchange near Birmingham and the Liverpool to Manchester section of the M62.

The organisation, which has issued a rare ‘amber’ traffic warning, is urging travellers to pack water to stay hydrated in the event of gridlocks.

The RAC’s Rod Dennis said: ‘We’re expecting busy roads to continue throughout this bank holiday weekend, especially to major holiday destinations with people eager to enjoy some time away before the new school terms begin in England and Wales.’

In a fresh blow for rail travellers after crippling strikes, there will be reduced timetables and bus replacement services on swathes of the network due to the £90million engineering works project.

There will be no trains from or to Charing Cross station in London for three days. There will also be disruption on the West Coast Main Line, which links the capital with the Midlands and North, between Euston and Northampton.