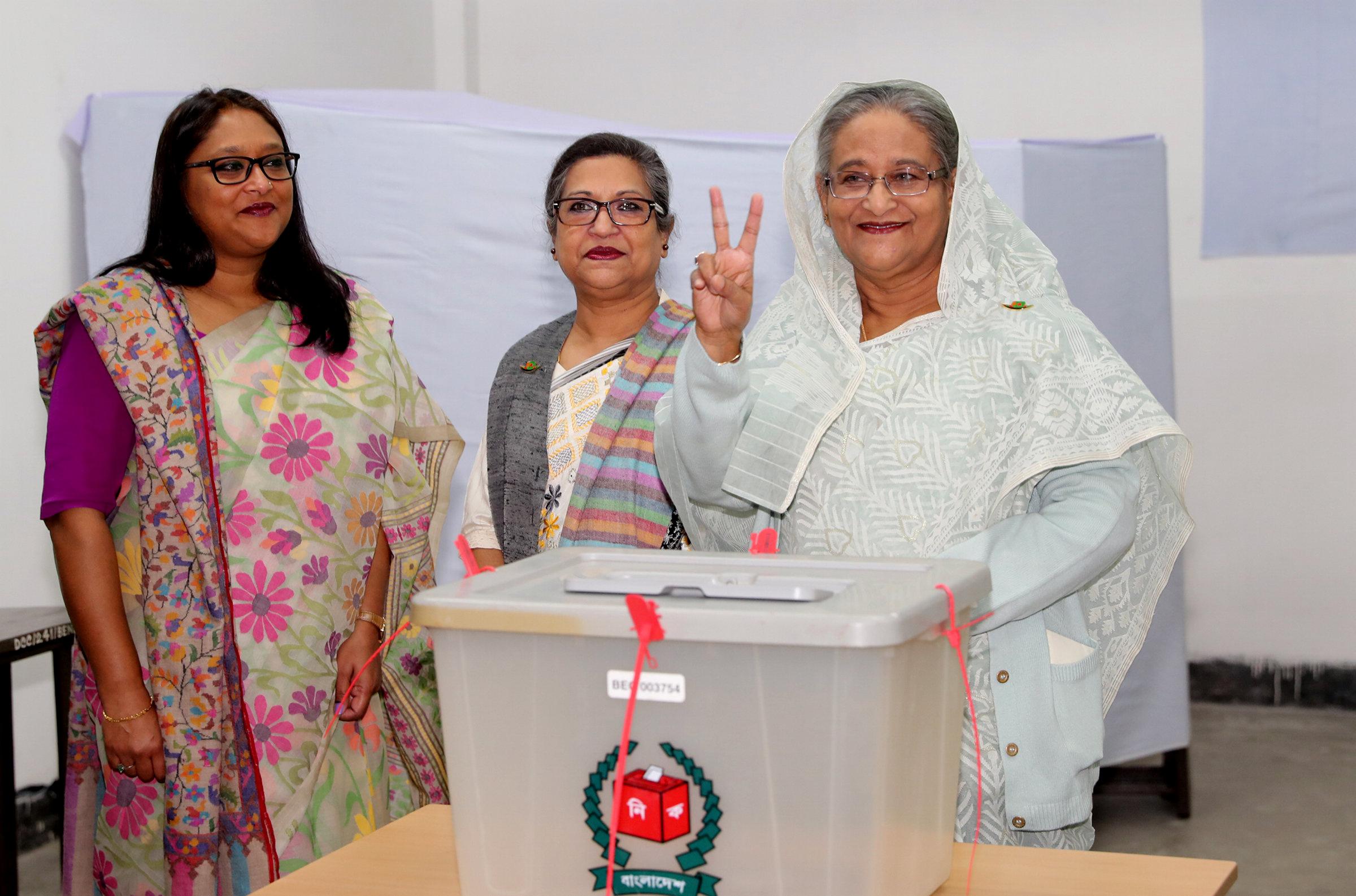 The win consolidated Hasina’s decade-long rule over Bangladesh, where she is credited with improving the economy and promoting development but has also been accused of rampant human rights abuses, a crackdown on the media and suppressing dissent. She denies such charges.

The alliance dominated by her Awami League, seen as close to regional power India, won 287 of the 298 seats for which results have been declared, the commission said. There are 300 constituencies in the country.

Raising minimum wages for workers in Bangladesh’s massive garments industry, the world’s second biggest after China, could be one of her first tasks after she takes office, party leaders have said. Hasina will meet foreign journalists and poll observers at her official residence later on Monday.

Opposition leader Kamal Hossain said their alliance, the National Unity Front led by the BNP, had called on the Election Commission to order a fresh vote under a neutral administration “as soon as possible”, alleging Sunday’s poll was flawed.

At least 17 people were killed as the vote took place, police said, after a violent campaign during which the opposition alleged the government denied it a level playing field.

“We’ve had bad elections in the past but I must say that it is unprecedented how bad this particular election was,” 82-year-old Hossain told Reuters late on Sunday.

“The minimum requirements of free and fair election are absent,” he said.

Hossain said he would meet opposition alliance members on Monday to decide their next step.

However, Sajeeb Wazed, Hasina’s son and an Awami League member, told Reuters no one was intimidated into voting for the party and accused the BNP of pre-election violence.

“Overall, there were long lines at polling stations and voting was peaceful. Despite the alarmist characterizations of outsiders, democracy is stable and flourishing in Bangladesh,” Wazed said by email.

Among the Awami League winners was Mashrafe Mortaza, the captain of Bangladesh’s one-day cricket team.

The Election Commission said it was investigating allegations of vote rigging from across the Muslim-majority country of 165 million people. A spokesman declined to say if those probes would affect the election result.

Meenakshi Ganguly, South Asia director for Human Rights Watch, said on Twitter: “With serious allegations of voter intimidation, restrictions on opposition polling agents and several candidates seeking a re-poll, there are concerns about the credibility of the Bangladesh elections.”

Hundreds of opposition workers were arrested in the months before the election on charges that the opposition said were “fictitious”. Many said they were attacked by ruling party activists, crippling their ability to campaign.

Hasina’s government has denied the accusations and her party says many of its own workers were hurt in attacks by the opposition. Seven ruling party workers and five BNP workers were killed and 20 wounded on election day, police said.

Reuters reporters across Bangladesh witnessed sparse attendance at polling booths and some voters alleged ruling party workers had blocked them from entering booths, saying their ballots had already been cast. Campaign posters of the ruling party dominated streets in many parts of Dhaka.

The Election Commission said it would declare voter turnout figures late on Monday.

This was the first election in which the BNP campaigned without its leader Khaleda Zia – Hasina’s arch rival. The two women have alternated in power for most of the past three decades but Khaleda has been in jail since February on corruption charges she says are politically motivated.

The Election Commission said it would hold a fresh vote for one seat where the poll was marred by violence. Another constituency, where a candidate died days before the election, will also go to the polls in the next few days.

Wazed told Reuters on Saturday the next government would try to lift Bangladesh’s growth rate to 10 percent, from 7.8 percent in the 2017/18 financial year.

He also said minimum wages for workers in the garments industry, which at sales of more than $30.6 billion generates around 83 percent of Bangladesh’s total exports, would be raised.

Wazed said the government wanted to diversify into phone and other electronics manufacturing. India, Bangladesh’s western neighbor, helped it win independence from Pakistan in 1971 but he said China, its other top investor, had been “very proactive” about investments.