London: The Speaker of the Commons, Sir Lindsay Hoyle, has conceded that Chinese government officials will be allowed to visit the Queen’s coffin as it lies-in-state, reversing an initial order that they be banned from the Parliamentary estate.

The move contrasts with the promises made by new Prime Minister Liz Truss, in her campaign to win Tory votes for the leadership, to be tough on China. 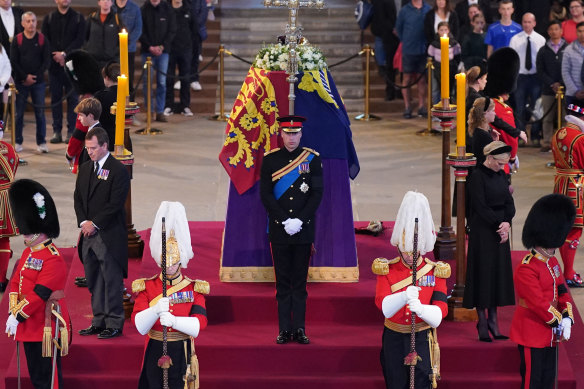 MPs who are campaigning for the UK to take a tougher stance on China were furious and decried the late-hour change of heart as appeasement and embarrassment, hitting out at the “political establishment” for leaning on the Speaker.

The row began last week when it emerged that China’s Vice-President Wang Qishan will attend the funeral on Beijing’s behalf.

Visiting world leaders, including Australia’s Prime Minister Anthony Albanese, have been given special access to jump the 14-hour queue to visit the lying-in-state in Westminster Hall.

However, China’s ambassador the UK has been banned from the Parliamentary estate by the Speaker of the House of Commons ever since Beijing sanctioned a group of MPs and Lords who were critical of what they say is the genocide against Uighur Muslims in Xinjiang.

Last week, they were told by Hoyle that the ban would include any visiting representatives, meaning Qishan would be banned from viewing the coffin.

However, Hoyle on Sunday conceded that the Chinese would be granted the same access as other visiting VIPs.

“No-one has been leaning on me at all, far from it,” he told the BBC.

“My view remains the same, that we would not welcome receptions in parliament and that’s when I stopped the ambassador and accredited Chinese from coming into the House of Commons.

“To hold a reception in the House of Commons when MPs and peers have been sanctioned is not acceptable.

“My view remains the same, and nothing has changed, but this is not about politics for the moment, this is about the grief we all share.”

He urged the Chinese to lift the sanctions on MPs.

“The establishment is always wrong, this is another example of the establishment’s appeasement, just as they got it wrong in the 1930s,” he told The Herald and The Age.

“It’s an embarrassment for the UK because it shows how weak we are in the face of Chinese bullying and it doesn’t augur well for the future,” he said.

David Alton, one of the sanctioned Members of the Lords, said the decision was “divisive, inept and deeply offensive.”

“It’s a bad decision because it is full of inconsistencies and illogicalities,” he said.

Tim Loughton, another of the MPs who is sanctioned by China and wrote to the Speaker last week requesting the Chinese be banned, said the changed stance was “deeply disturbing.”

“It is deeply disturbing if the news about the Speakers caving in to pressure to allow the Chinese delegation into Westminster Hall,” he told this masthead.

“Last year the Chinese Ambassador was banned from coming to the Palace of Westminster as the highest representative of the Chinese government in the UK and in specific response to that government’s decision to sanction seven Parliamentarians from speaking up and doing their job.

“It would be bizarre now to claim that the same ban should not apply to someone even higher in the Chinese regime who had an even closer hand in trying to suppress the right of free speech in an elected democracy.

“If the Speakers have kowtowed to Chinese pressure it sends a very dangerous message to Beijing that despite strong words they can always get their way by throwing their weight around and we had hoped that parliament would be resolute in standing against such bullying tactics,” he said.

The foreign office did not respond to a request for comment.