Engineering giant Babcock has been revealed as the preferred bidder for the £1.3 billion contract to build a new fleet of Royal Navy frigates – which will have a range of 9,000 nautical miles and boast impressive naval fire power.

The Government has committed to buying at least five of the low-cost warships for the Royal Navy, with the first vessel expected to be in the water by 2023.

The average production cost is £250 million per ship. Five vessels will be assembled at Babcock’s Rosyth Dockyard in Fife, involving supply chains throughout the UK.

More than 2,500 jobs across the UK are expected to be supported as a result of the Type 31 programme, including 150 jobs for new technical apprenticeships.

Babcock said work on the fleet will begin immediately once the formal contract is awarded later this financial year, with detailed design work first and manufacture starting in 2021. 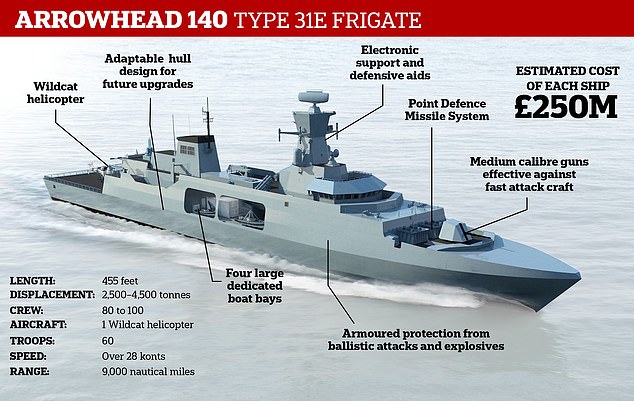 The Type 31e frigate, also known as the Type 31 frigate or General Purpose Frigate, is a planned class of frigate for the United Kingdom’s Royal Navy intended to enter service in the 2020s

Babcock International’s ‘Arrowhead’ design needs a company of roughly 100 and offers enough room for an embarked military force of 60, according to UK Defence Journal.

It will be capable of a speed of 28 plus knots, with a range of 9,000 nautical miles at 12 knots. The Arrowhead design offers options of 127mm medium calibre guns to engage with surface and land targets, with small calibre weaponry of up to 40mm on the upper deck positions.

Type 31 frigates are a smaller version of the Type 26 warships used by the navy today.

Babcock selected the in-service Iver Huitfeldt frigate as the baseline design, saying the ability to fit the existing systems and equipment from the parent design is retained in order to provide flexibility when built.

This means that a 32 cell Mk41 Strike Length silo can be fitted on the new design in order to accommodate a wider range of anti-air missiles, along with vertical launch anti-surface weaponry and precision land attack missiles.

The warship will feature four large boat bays which will be capable of deploying RHIBs, USVs and UUVs. 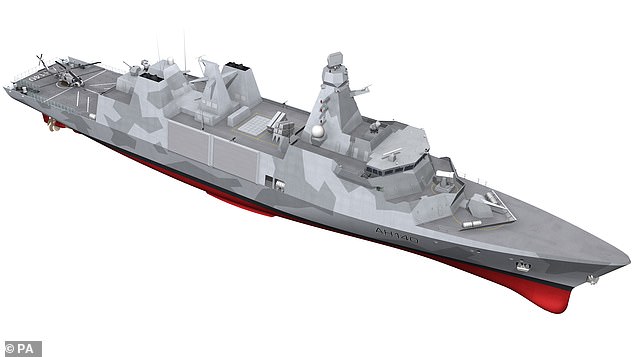 The average production cost is £250 million per ship. Five ships will be assembled at Babcock’s Rosyth Dockyard in Fife, involving supply chains throughout the UK (pictured: Artist impression of the Arrowhead 140 ship) 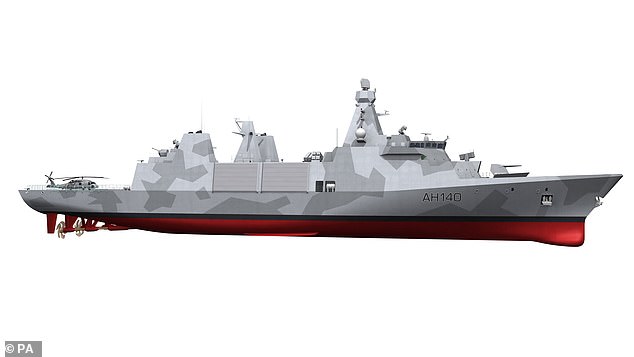 Babcock said work on the fleet will begin immediately once the formal contract is awarded later this financial year, with detailed design work first and manufacture starting in 2021

Archie Bethel, Babcock chief executive, said: ‘Driven by innovation and backed by experience and heritage, Arrowhead 140 is a modern warship that will meet the maritime threats of today and tomorrow, with British ingenuity and engineering at its core.

‘It provides a flexible, adaptable platform that delivers value for money and supports the UK’s National Shipbuilding Strategy.

‘Arrowhead 140 will offer the Royal Navy a new class of ship with a proven ability to deliver a range of peacekeeping, humanitarian and war-fighting capabilities whilst offering communities and supply chains throughout the UK a wide range of economic and employment opportunities.’

The Ministry of Defence aims to award the contract by the end of the year. 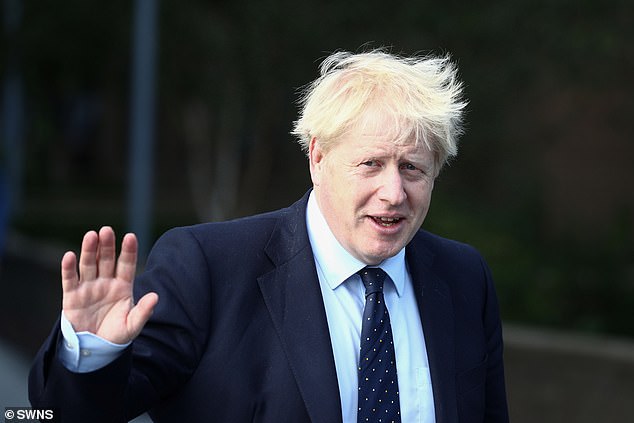 Boris Johnson, pictured arriving at HMS Belfast on the River Thames today, said: ‘We need a shipbuilding industry and Royal Navy that reflect the importance of the seas to our security and prosperity’

Prime Minister Boris Johnson welcomed the announcement as he visited NLV Pharos, a lighthouse tender that is moored alongside HMS Belfast on the Thames for London International Shipping Week.

He said: ‘We’re here to announce that Babcock is the preferred bidder to build five new Type 31 frigates and I’m so excited by that because I see the UK as a great shipbuilding nation – we already are but we want to expand it.

‘And what it delivers is high quality jobs for young people – really high-skilled jobs for young people in this country – but also massive export opportunities of vessels that not only help to keep the peace but tackle piracy, help dealing with immigration issues across the seas, all sorts of ways which UK naval vessels are really helping the modern world – and they’re a fantastic export for our country.’

WHO ARE BABCOCK INTERNATIONAL?

They helped design and deliver the HMS Queen Elizabeth and HMS Prince of Wales aircraft carriers as part a partnership between Babcock, BAE Systems, Thales UK and the MOD.

Babcock’s UK headquarters are situated in London, and the company has offices, specialist training facilities, dockyards, equipment testing centres and research and development facilities across the United Kingdom.

The company says this makes them a ‘significant employer and a key driver of the UK economy’.

Babcock design, manufacture and support mechanical and electrical systems and equipment, with their products featuring on both submarines and surface ships, ranging from weapons handling and external launchers to remote communications systems and life raft depolyment equipment.

In the marine sector, the company supports a number of navies around the world – including Britain’s – and offers ‘marine technology solutions’.

The company boasts 45 years’ experience in defence, with a spokesperson saying: ‘Drawing on an unrivalled depth of naval and engineering know-how, our teams safely and efficiently support, and are trusted to deliver, complex and critical programmes on a vast scale.

‘Testament to the strength of our long-term relationships is our involvement in all current and future UK naval programmes, spanning the next fifty years, along with successful, collaborative working arrangements with navies around the world, including Canada, Australia and New Zealand.’

Speaking ahead of the visit he said: ‘The UK is an outward-looking island nation and we need a shipbuilding industry and Royal Navy that reflect the importance of the seas to our security and prosperity.

‘This is an industry with a deep and visceral connection to so many parts of the UK and to the union itself.

‘My Government will do all it can to develop this aspect of our heritage and the men and women who make up its workforce – from apprentices embarking on a long career to those families who have worked in shipyards for generations.’

He added: ‘I look forward to the restoration of British influence and excellence across the world’s oceans.

‘I am convinced that by working together we will see a renaissance in this industry which is so much part of our island story – so let’s bring shipbuilding home.’

The PM has appointed Defence Secretary Ben Wallace as the Government’s new shipbuilding tsar to enhance the UK’s production.

He will look at how the Government can use further education, skilled apprenticeships and graduates to achieve a sustainable skills base for British shipbuilding across the UK.

Mr Wallace said: ‘These mighty ships will form the next generation of the Royal Navy fleet.

‘The Type 31 frigates will be a fast, agile and versatile warship, projecting power and influence across the globe.

‘The ships will be vital to the Royal Navy’s mission to keeping peace, providing life-saving humanitarian aid and safeguarding the economy across the world from the North Atlantic, to the Gulf, and in the Asia Pacific.’

The vessels will be fitted with the world-leading Sea Ceptor missile system, a range of highly advanced weapon and sensor systems and a combat system with a 4D air and surface surveillance and target indication radar.

They will also have capabilities to operate with a Merlin or Wildcat helicopter.

The naming of the Babcock-led consortium as the preferred bidder for the £1.3 billion Royal Navy contract was welcomed by supporters of an under-threat shipyard in Belfast.

The consortium, including the Harland and Wolff shipyard, is expected to be formally awarded the contract later this financial year.

Harland and Wolff supporters said the contract would sustain five to six years of work at Belfast shipyard through steel fabrication work alone.

The historic shipyard – best known for building the Titanic – entered administration in August, with accountancy firm BDO overseeing the process.

Workers have been staging a ’round-the-clock occupation of the site in a campaign to save it.

A union leader involved with the campaign welcomed the contract development. 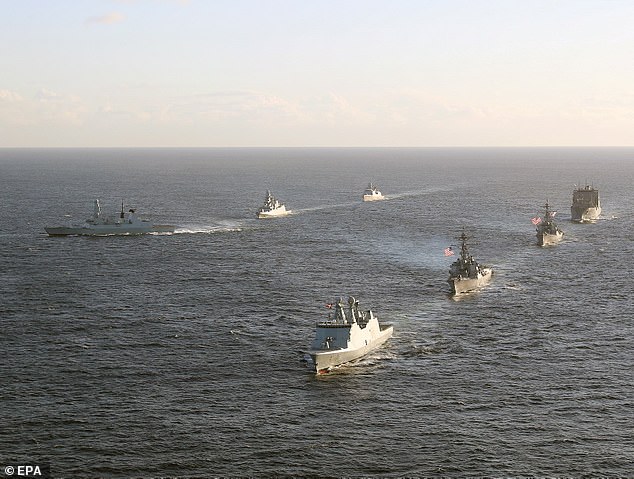 Royal Navy warship HMS Defender (pictured left) with other NATO members warships off the coast of Scotland, 19 May 2019. The new models will be built with ‘cutting edge’ technology and can operate with Merlin or Wildcat helicopters

Unite regional co-ordinating officer Susan Fitzgerald said the news ‘highlights that the shipyard in Belfast has a future as a viable shipbuilder’.

‘Just weeks ago politicians including the British Government had written off this yard, saying it had no future,’ she said.

‘Through their courageous stand the workforce at Harland and Wolff have held open the door for the company to participate in this work – they have kept this shipyard in the game.

‘The opportunity exists to bring this work to Belfast providing at least five to six years of work in steel fabrication onsite alone.’

She added: ‘We now need to see urgent intervention by government to get our members back to work.

‘There is a clear programme of work for the company into the future – all that is needed is the political will to safeguard a future for this shipyard.’ 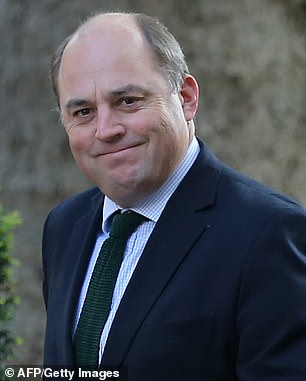 Boris Johnson had pledged to ‘bring shipbuilding home’ by announcing that five new Royal Navy warships would be made in Britain.

The Government has pledged to maintain a surface fleet of at least 19 frigates and destroyers and to expand this fleet in the 2030s.

Defence Secretary Ben Wallace had said: ‘The Type 31 frigate will be a fast, agile and versatile warship, projecting power and influence across the globe.

‘The ships will be key to the Royal Navy’s fleet to keeping peace, providing life-saving humanitarian aid and safeguarding the economy across the world from the North Atlantic, to the Gulf, and in the Asia Pacific.’

The Type 31 frigates will be fitted with advanced weapons including the Sea Ceptor missile system and cutting edge radar, and will be able to operate with Merlin or Wildcat helicopters.

Work on the vessels will start before the end of the year, with the first ships ready by 2023.

East Belfast DUP MP Gavin Robinson also welcomed the news, describing it as a ‘boon’ for the workforce.

‘With the work on these frigates due to begin by the end of 2019 it should also mean that the benefits can be felt locally within a relatively short time frame and last for five to six years,’ he said.

‘Orders such as this also highlight the wider importance of defence contracts.

‘These are particularly important for east Belfast, with 27 companies based in the constituency that are part of the aerospace, defence and security Industry.

‘As the administration process within Harland & Wolff continues and does so positively, this announcement will be a huge boon for the workforce who have admirably and steadfastly stood with the yard; knowing the potential that lies ahead.

‘This is not the end of the road, however, and I will continue to support Harland & Wolff in any way possible as it seeks to grow its presence in the markets of the future and ensure the long-term success of the yard.’